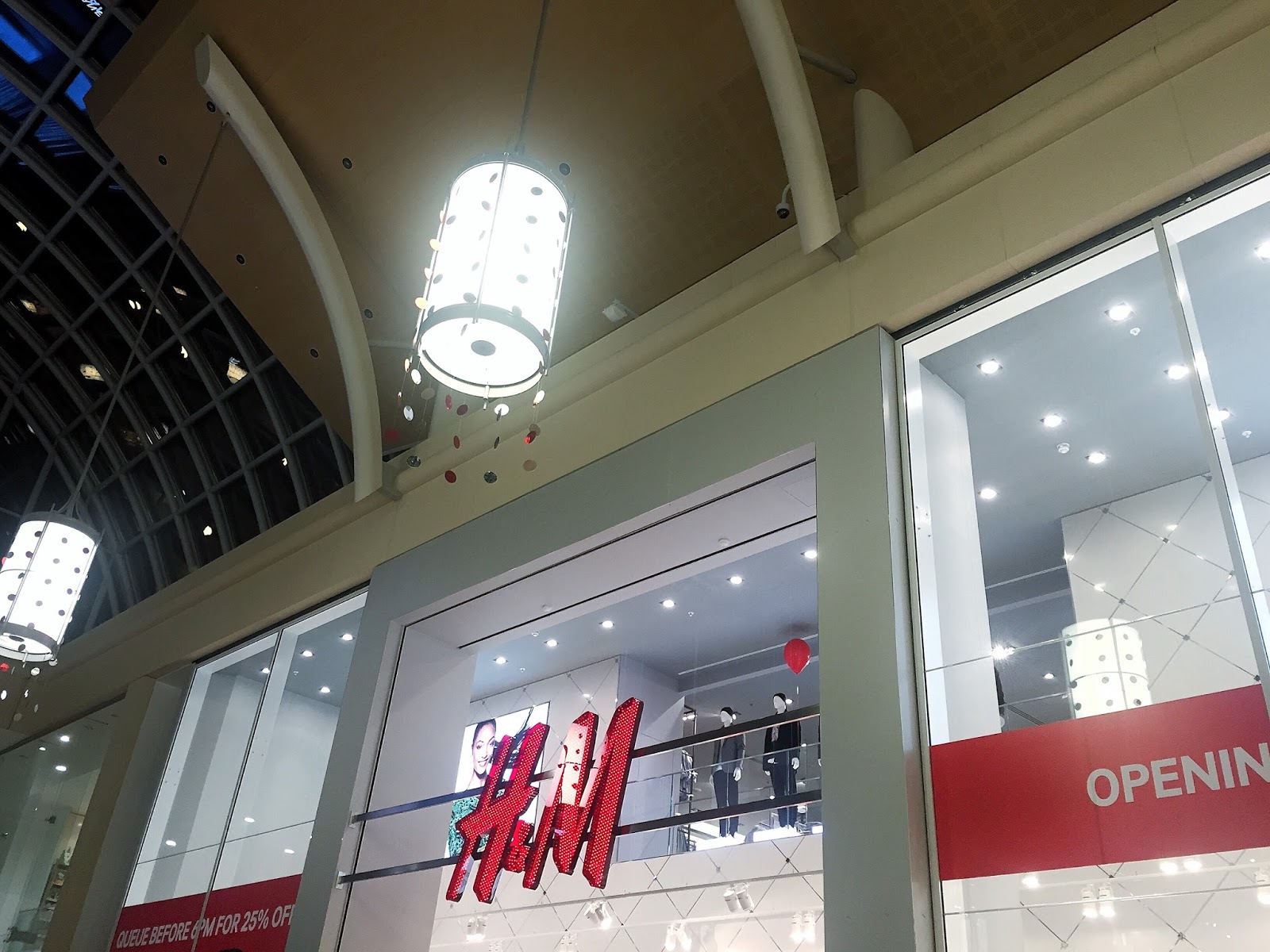 So yesterday evening at 6pm, the new Cardiff H&M store in the St. David’s 2 shopping centre was finally unveiled after much anticipation from the welsh public.

They had promised a big opening act (Ella Eyre) and goodie bags, discounts, and more for those in the queue before it opened.

When I first heard about where the new store would be placed in Cardiff’s biggest shopping centre, I knew that it was clearly going to be much bigger than the previous H&M’s in the welsh capital and they would therefore stock Beauty and Home.Which is precisely why I was in that queue before 4.30pm. I have literally been waiting for years for H&M to finally stock their Home range in Cardiff so the thought of this was enough to get me excited about the launch. 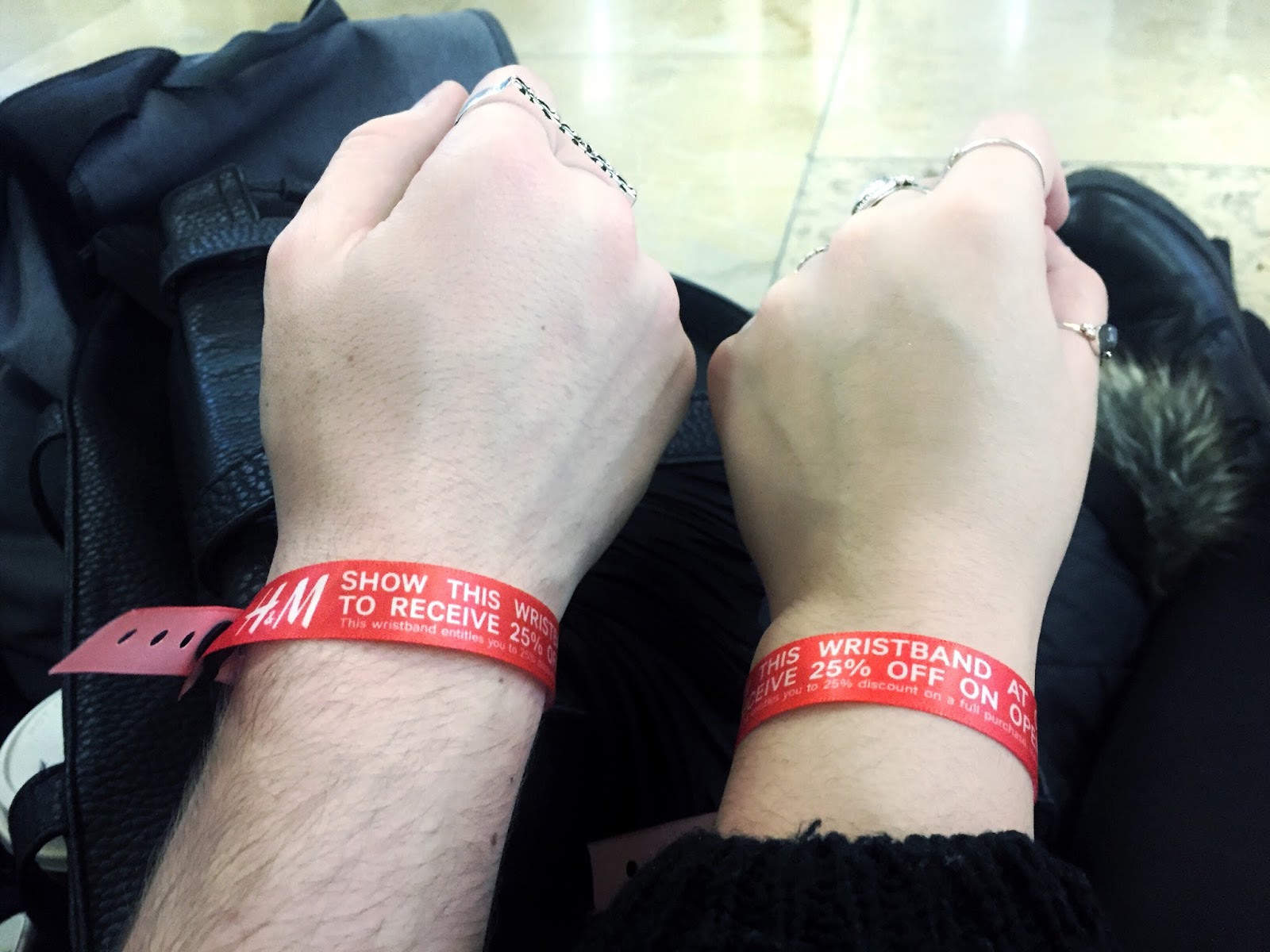 As my boyfriend and I were in the queue waaaay early, we got given these wristbands which entitled us to 25% any full priced purchase for the entire launch night. This was rewarding enough after waiting for a total of an hour and a half for the store to open.

It did take a while to actually get in the store.
Firstly, there was a chamber-style choir at the entrance that were a pleasure to listen to.
Then there was a variety of filming and photography going on with the members of staff getting involved. I’m pretty sure that everyone with us in the queue was a bit fed up of waiting, and wanted to get involved themselves.
Upon (finally) entering the new store we were handed a goodie bag each, as well as a choice of cupcakes and alcohol-free cocktails. As soon as I realised that the drink was basically just tropical juice, I dropped it somewhere as it was slowing my shopping down.

So here’s my mini haul dedicated to the H&M launch day! 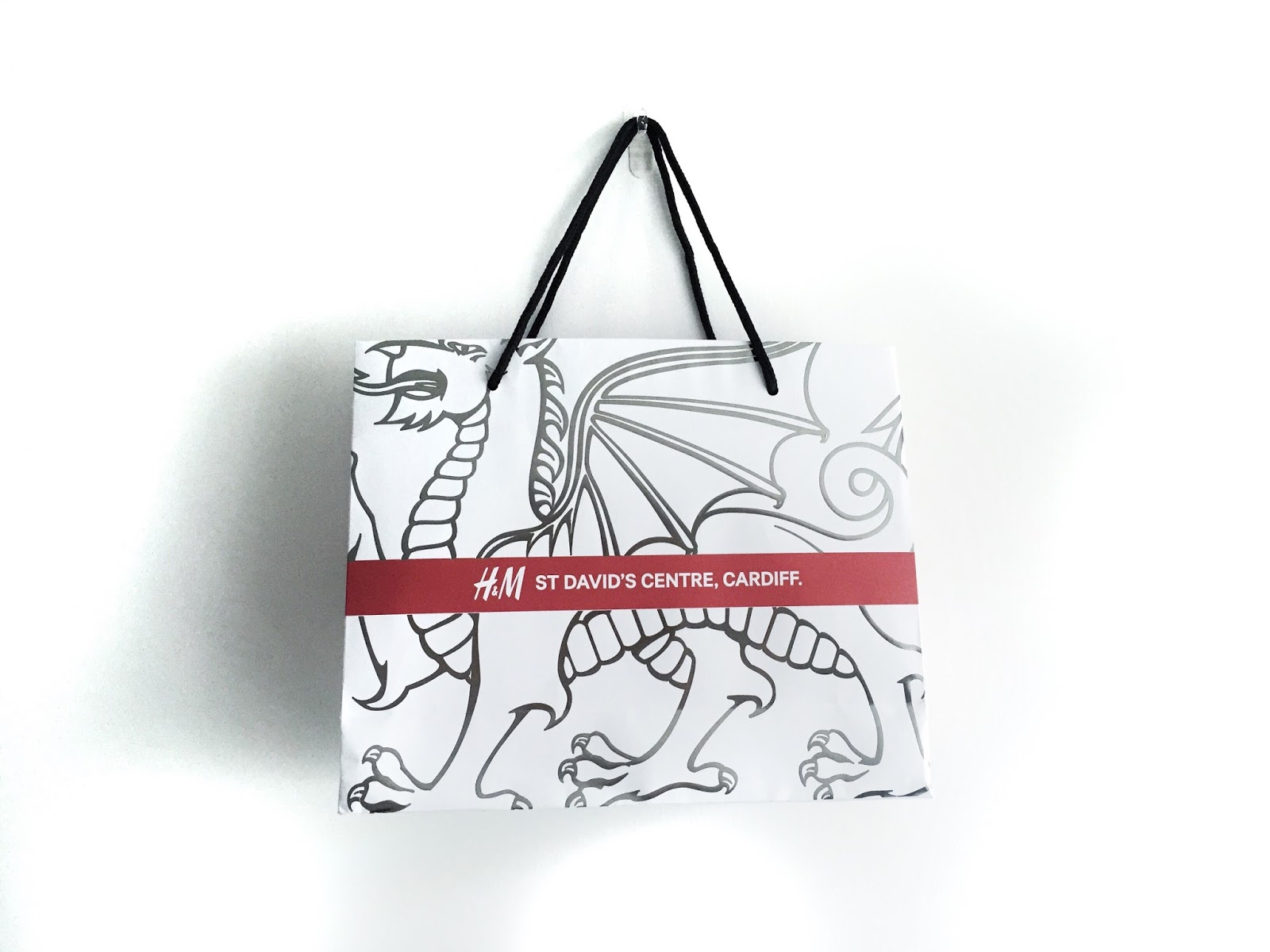 The goodie bag included with the launch was… okay. If I didn’t get my 25% discount wristband, then I would have been thoroughly disappointed with it. I thought that they would at least put in a mini 10% voucher, or something cool at least. A notebook, pen, and bag weren’t the most thrilling goodie bag fillers that I’ve ever seen. They also included a pencil case/makeup bag thing that was kinda small, and really plastic-y, so both mine and my boyfriends went in the bin. We both thought the notebook and pen were alright, however the real gem was the tote bag. Both durable and aesthetically attractive, we were quite impressed with it. 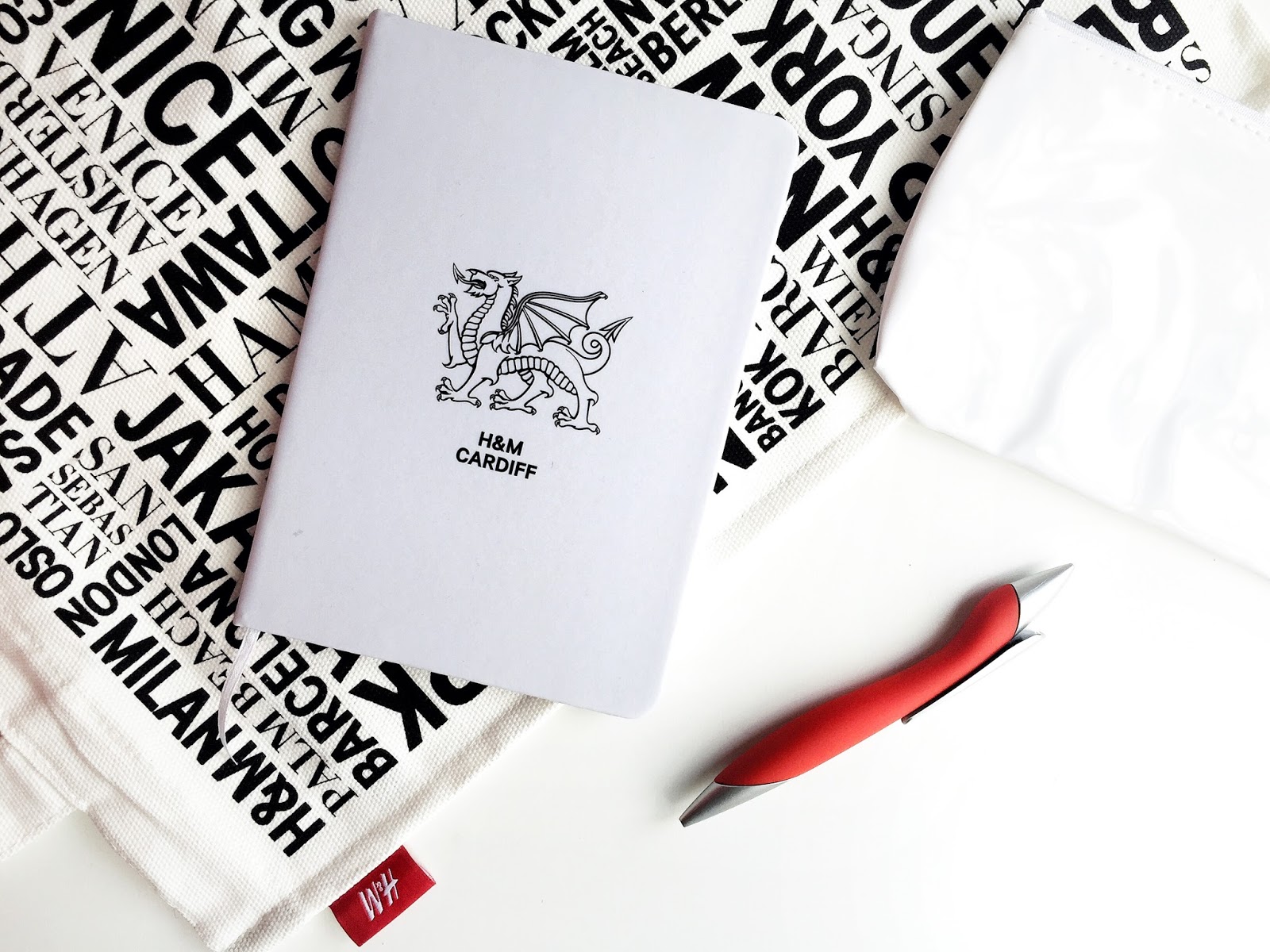 The section that I pretty much ran to was of course, the H&M homeware.

If you’ve read some of my previous wishlist posts, I mention items from the collection quite a lot (and probably moaned about how I’d have to order online) however, that nightmare is now over!

Although the new store didn’t have many of the things I wanted in stock, I was reassured by a member of staff that they would be getting a lot of new stock in soon. As soon as I spotted some rose gold and marble, I soon forgot about that anyway.

The two homeware items that I decided to purchase were the

I would call it rose gold but okay…

I’ve been wanting to buy some affordable, new blog photography props however usually you really do have to sacrifice style/finish/quality (or all three) for the price of homeware.

Apart from a new surprise finds in TK Maxx, this will be my new go-to blog prop shop.

Both items are neutral, and will add depth of texture to my blog photography. 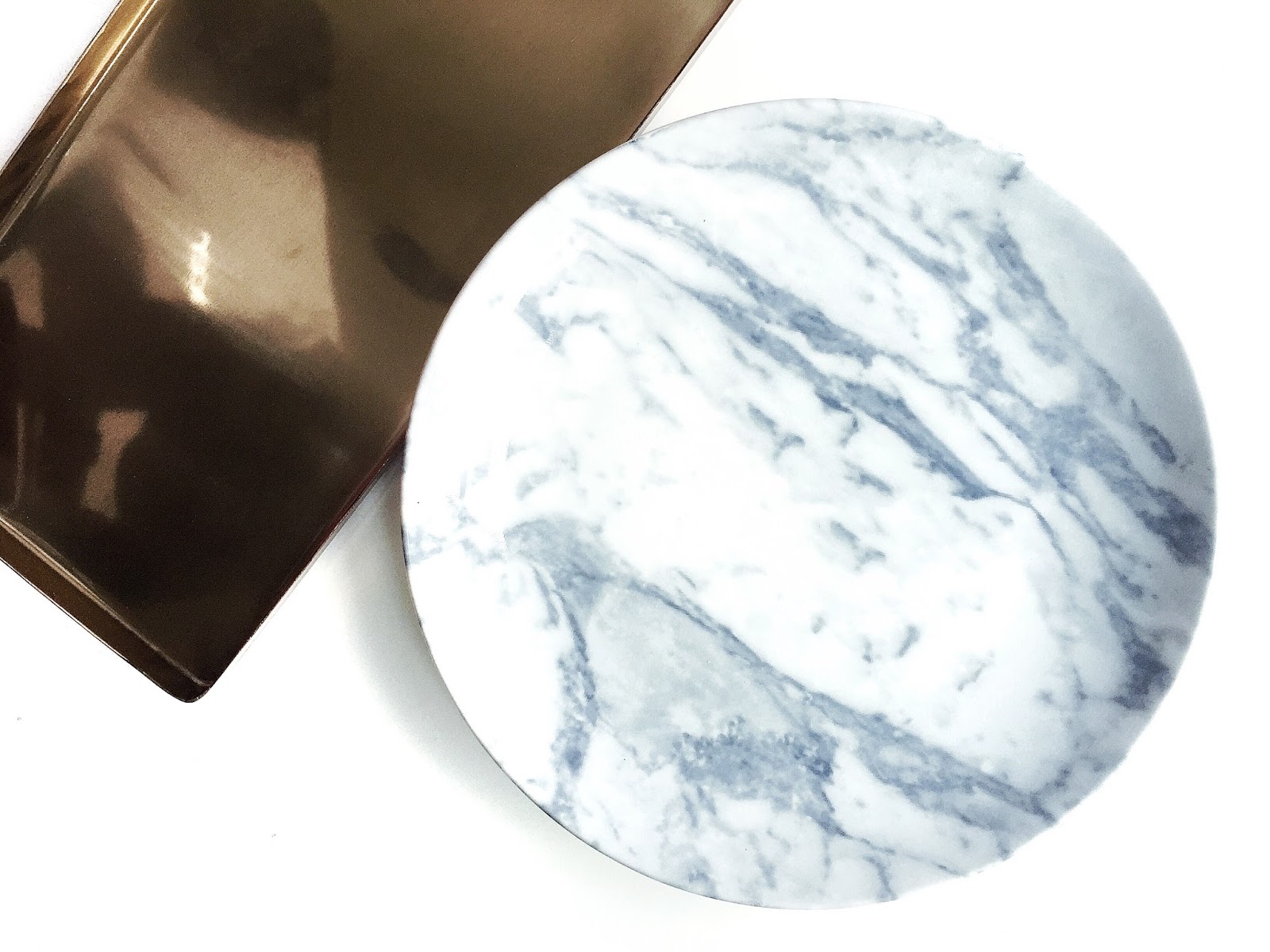 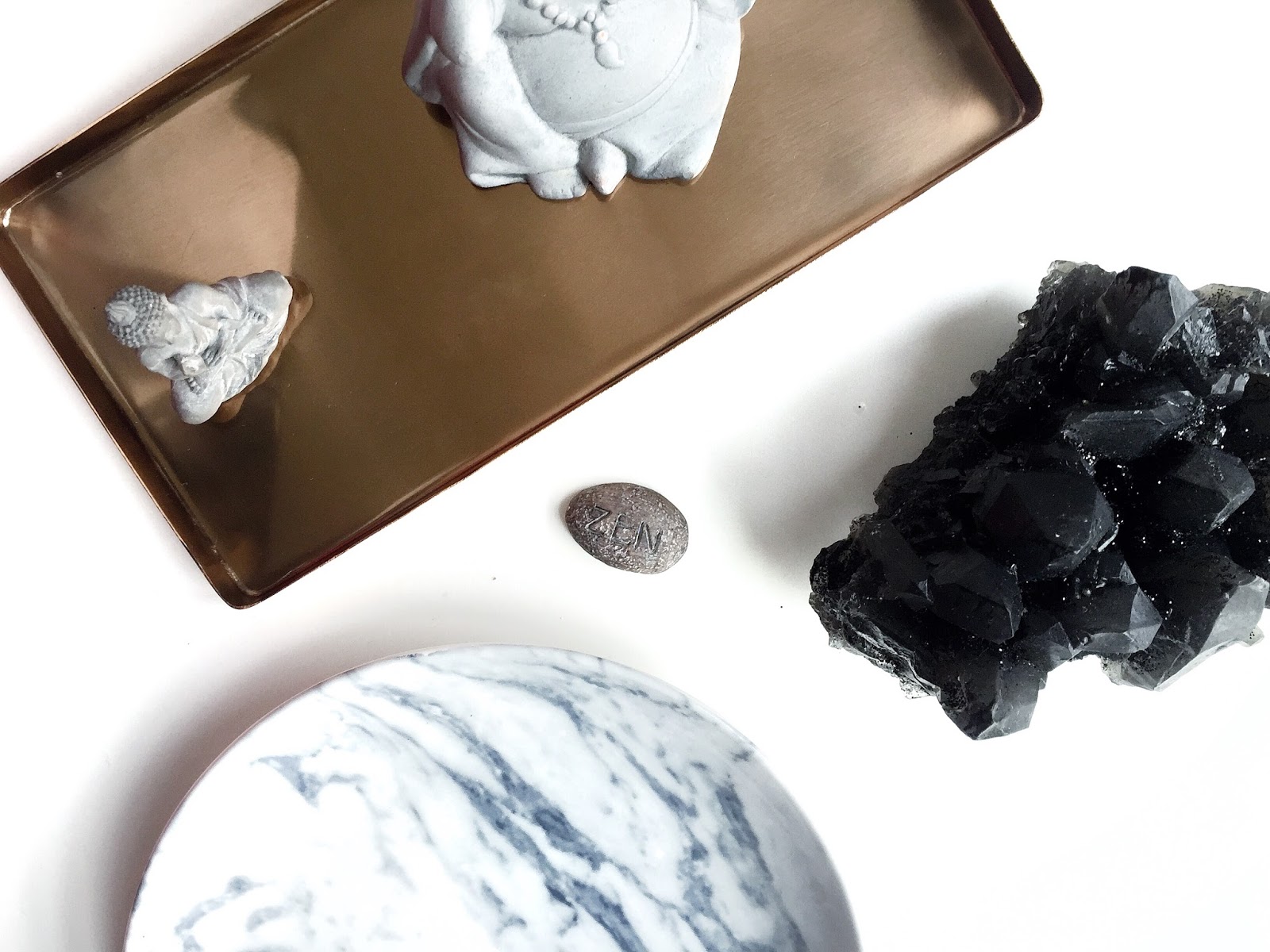 As I was heading to browse the vast clothing sections, I happened to bump into these darlings on the way. With a pointed suede toe and patent heel, these boots radiate sophistication. They are just the right ankle height to wear with skirts and trousers, and have the just the right heel height for everyday comfortable wear. This really did seal the deal when I tried them on, and I fell in love a little bit. I’ve been looking for the perfect AW15 ankle boot and this my friends, is it. 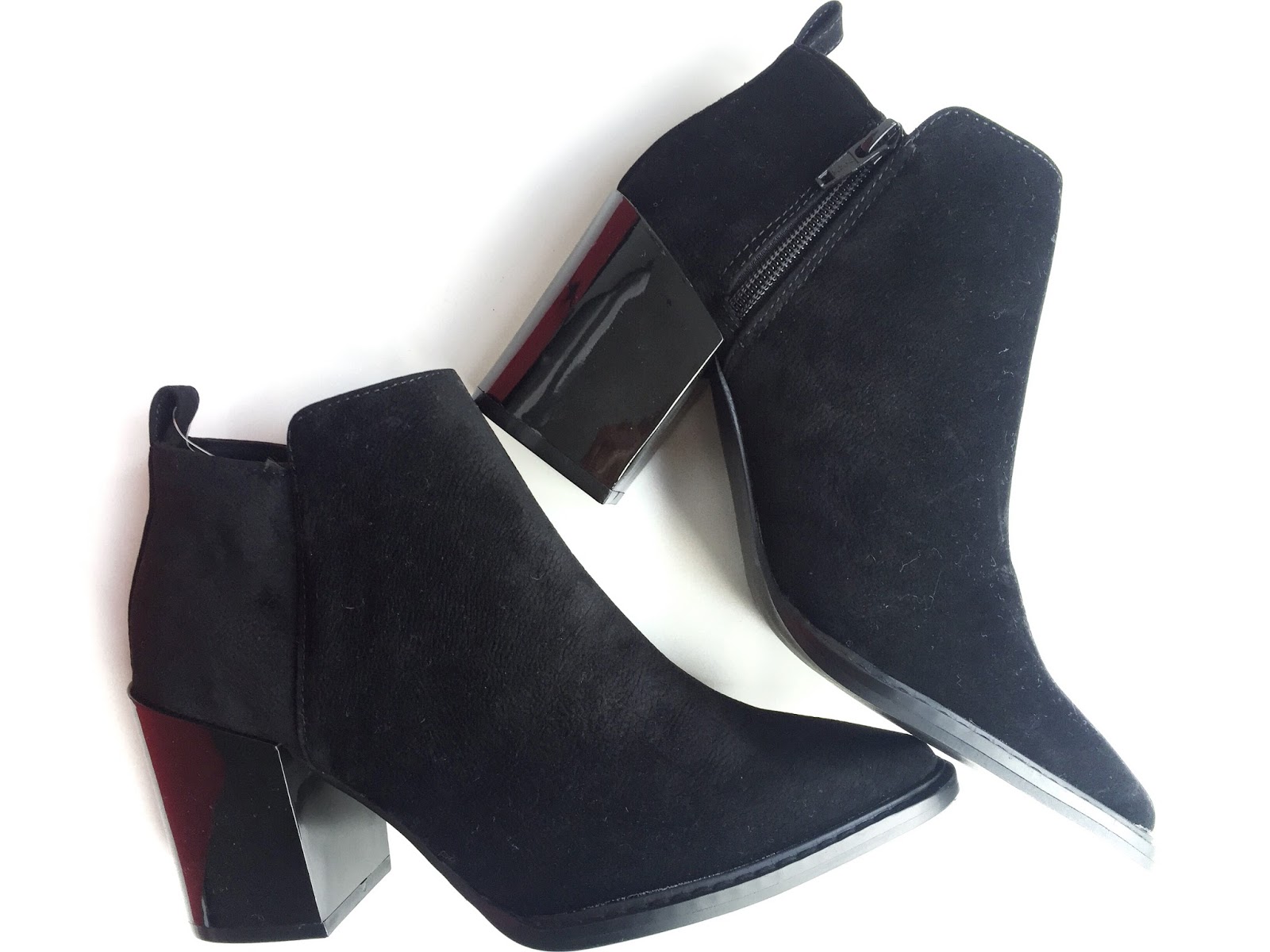 A few weeks ago I ordered a skirt and top co-ordinate set from Missguided only to find out that they were made of real animal feathers. After digging around on the internet, I found that there are reasons to believe that wearing real feathers is as bad as wearing real fur. It makes sense, I would never buy a real animal skin on my shoulders so why would I wrap a birds feathers around my waist?

Anyway, seeing this skirt on a mannequin provided me with so much joy as the feather-esque fringing is made of a synthetic alternative to real feathers. I have seen skirts like this is so many shops in the fast few months, and it was a breath of fresh air to find one so affordable. Plus, the colour pretty much exactly matched my hair colour and I thought that was kind of cute.

I would team this one with a gothic, high neck lace top and chunky black boots for evening and a neutral knit and heavy silver jewellery for day-wear (think Scream Queens pastel-chic).
It does have a very 20’s feel about it, however I would personally avoid styling in that era as the piece would lose all edge. 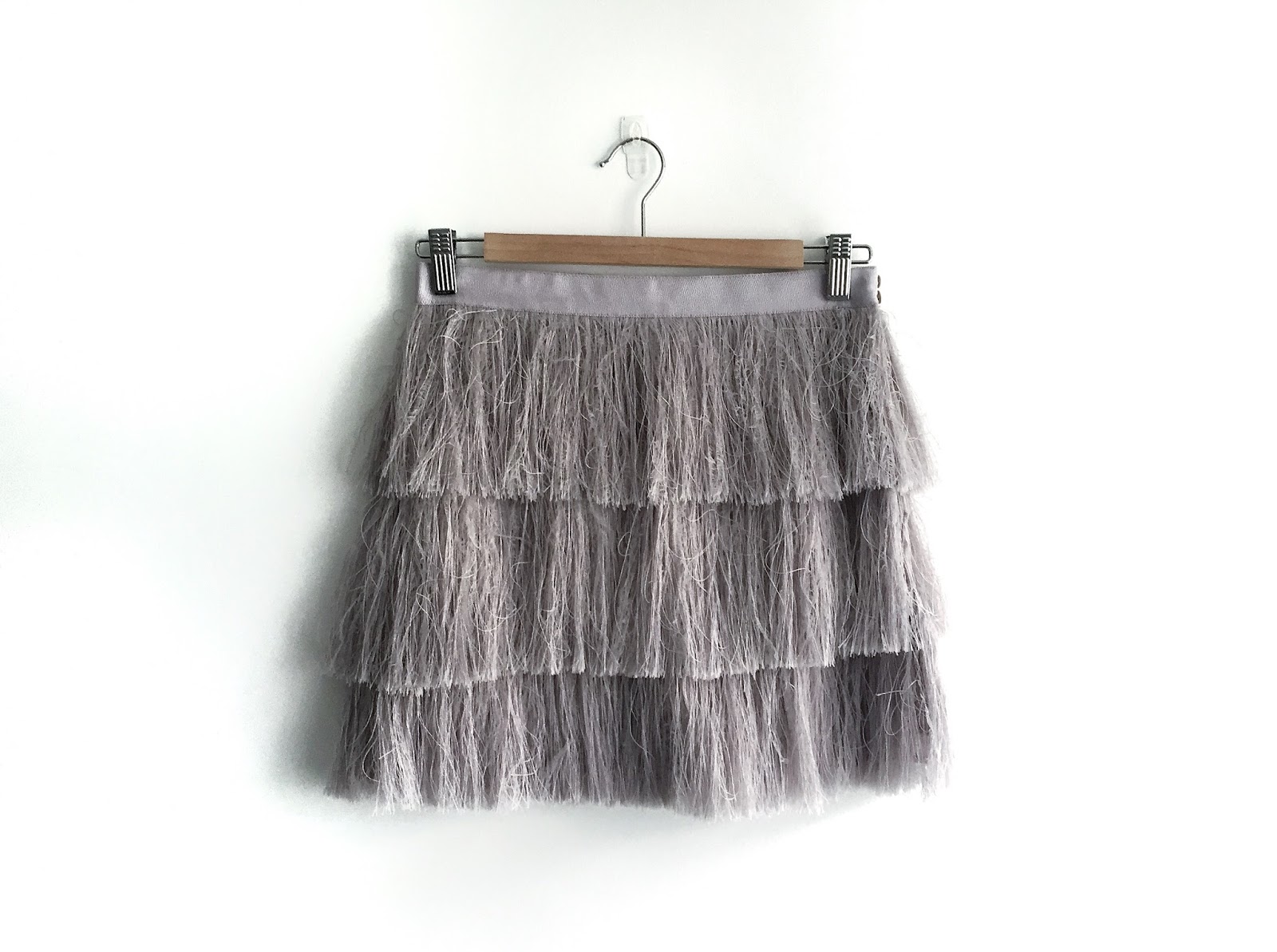 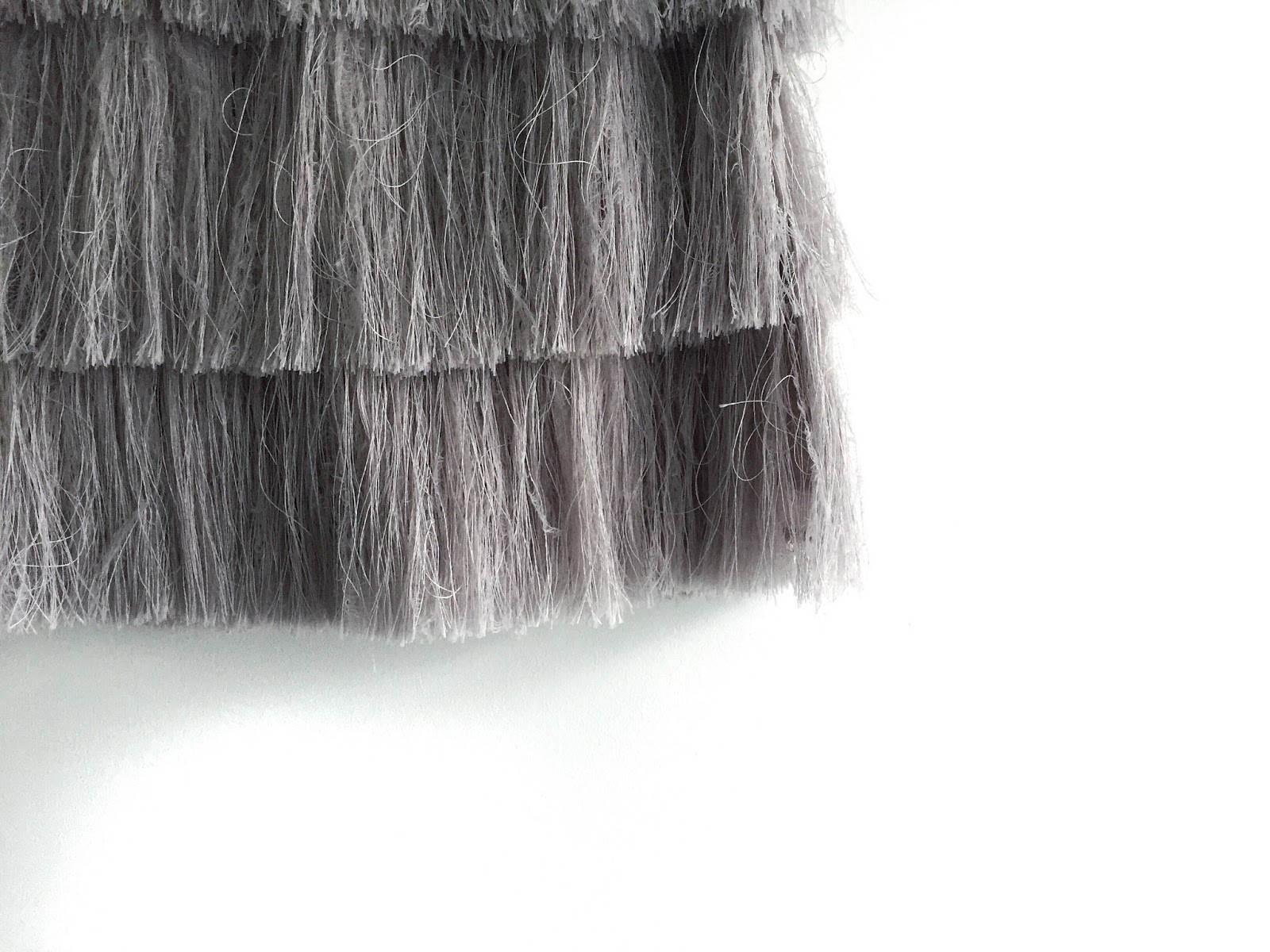 This one was a impulse purchase, and so far I have no regrets.
As the bardot neckline doesn’t photograph well, I’ve provided a little shot of the beautiful lace.
I’m a sucker for anything bardot as it really does even out busty chests, yet the bodycon shade adds that subtle sex appeal without really revealing anything.
The following is always true, less is more.
Well apart from chocolate, and kittens, and… 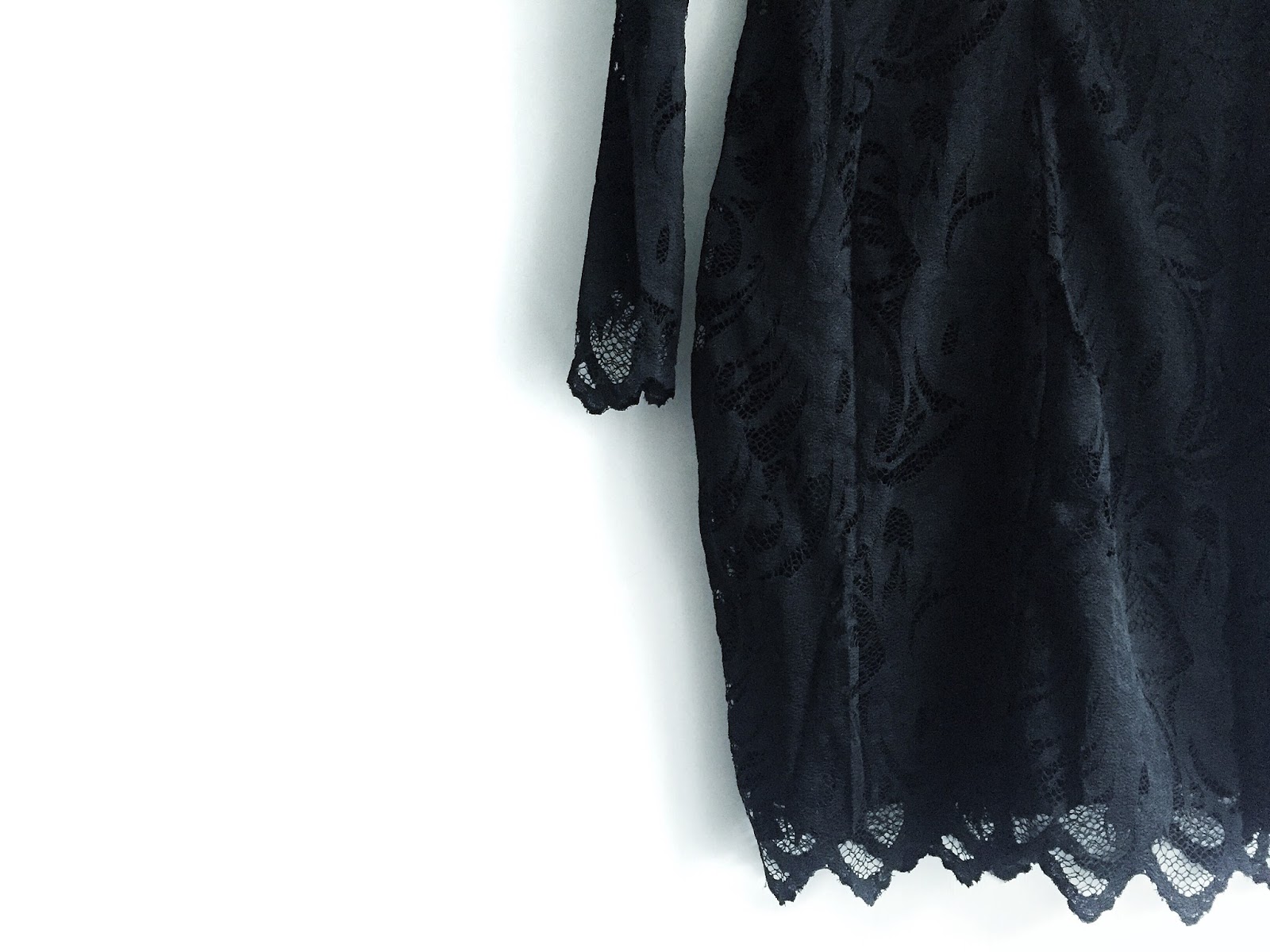 An extra surprise from H&M was the ability to have your nails/makeup/hair done for free with a £25 spend which was given in the form of a voucher with your purchase at the tillpoint.

Unfortunately, I didn’t manage to take advantage of these offers as the queues were so long but it was a great way to get people involved. 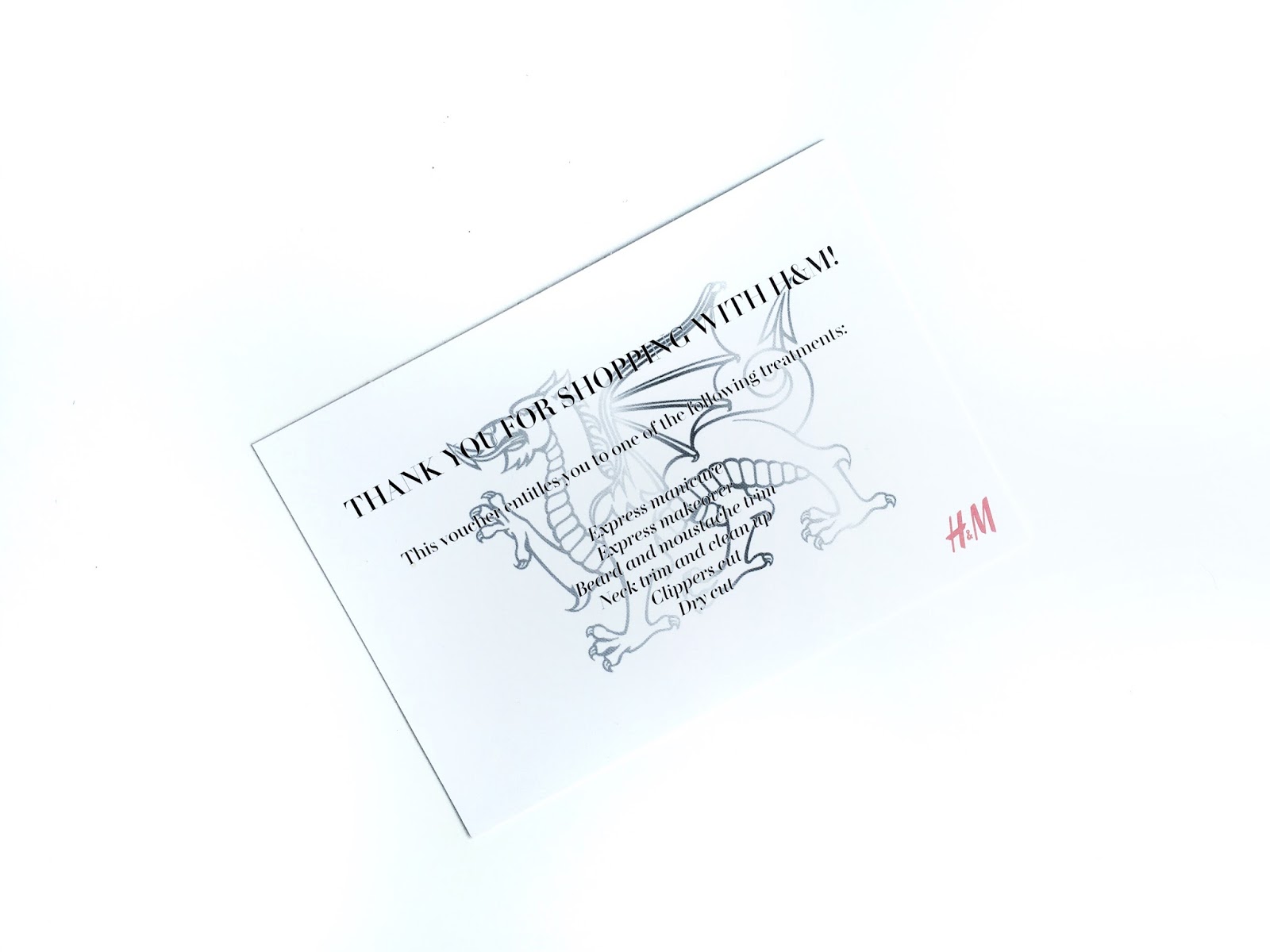 One thing that I was absolutely gutted about, was that fact that the Beauty section was constantly so busy and it was pretty much impossible to swatch anything without getting in someone’s way. That’s not my thing, so I’ll probably pop back into the store once the launch hype dies down a bit (feeling a H&M Beauty review perhaps…)

So if you’re in Cardiff any time soon, it’s definitely worth exploring the new store!