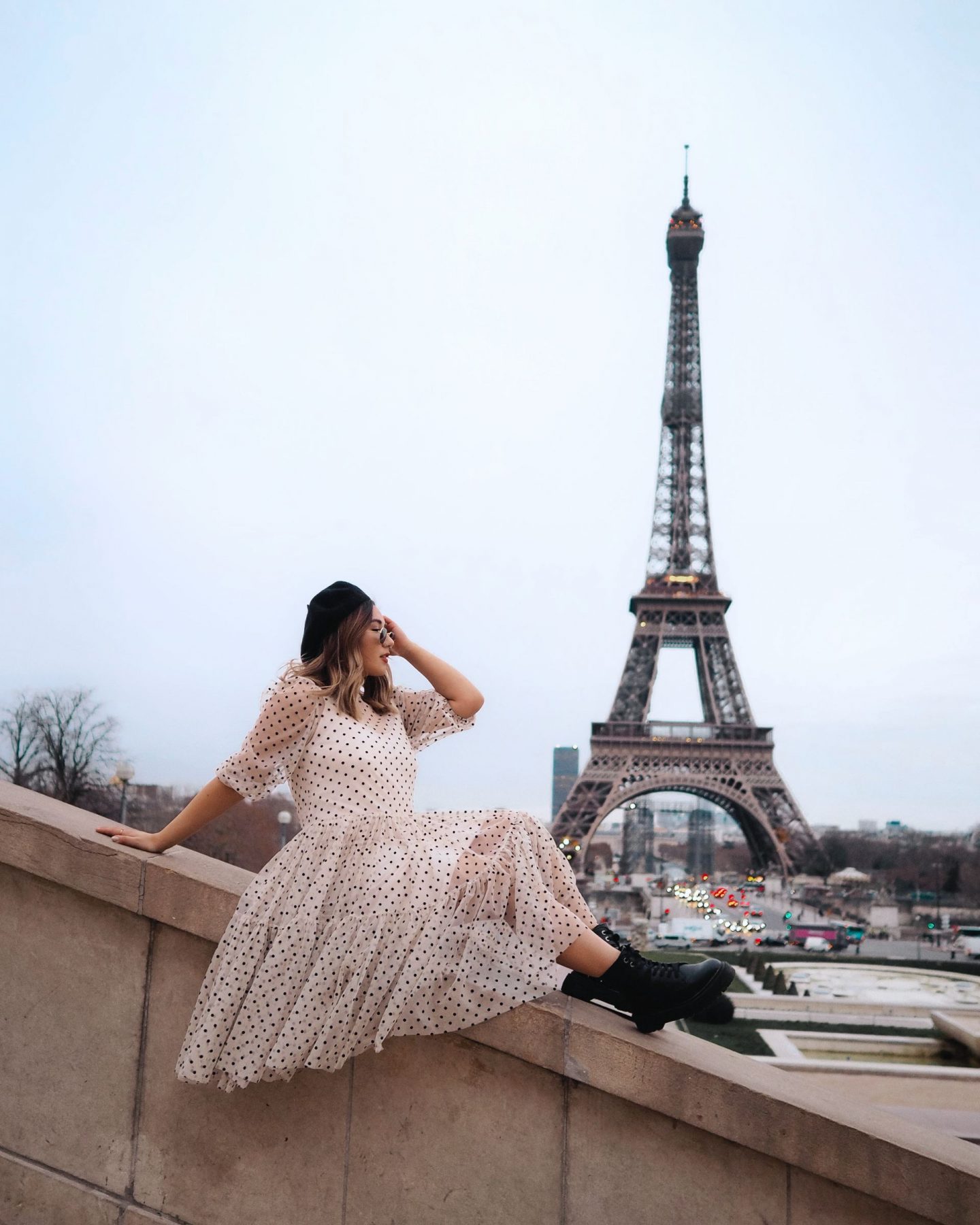 Bonjour! If you’re over here, it’s likely that you’ve probably spotted a few Parisian shots on my Instagram feed recently. Here for the deets? Well I’ve got you, huns. I’ve drafted up a solid 9 locations where we managed to shoot amazing photos, and were equally easy to get to. We ended up shooting at all of these locations in just under 48 hours, so it can be done… But if you’re enjoying Paris at a slower, more relaxed pace I’d suggest picking out only a few per day. Then, you can incorporate them into your daily plans & use them as tools to explore more of the city.  One area we didn’t get to see was Monmarte, but that’s always an excuse to book another Eurostar ticket, ey? So here it is, my ultimate Instagram guide to Paris!

This was our first photo stop in Paris, it was around midday, and it was quite busy. There are quite a few tourist groups all trying to get “the shot”, but one big pro of this location is the sheer amount of vantage spots. The Arc De Triomphe is in the centre of a large roundabout so you can pretty much take photos at any angle around the archway. 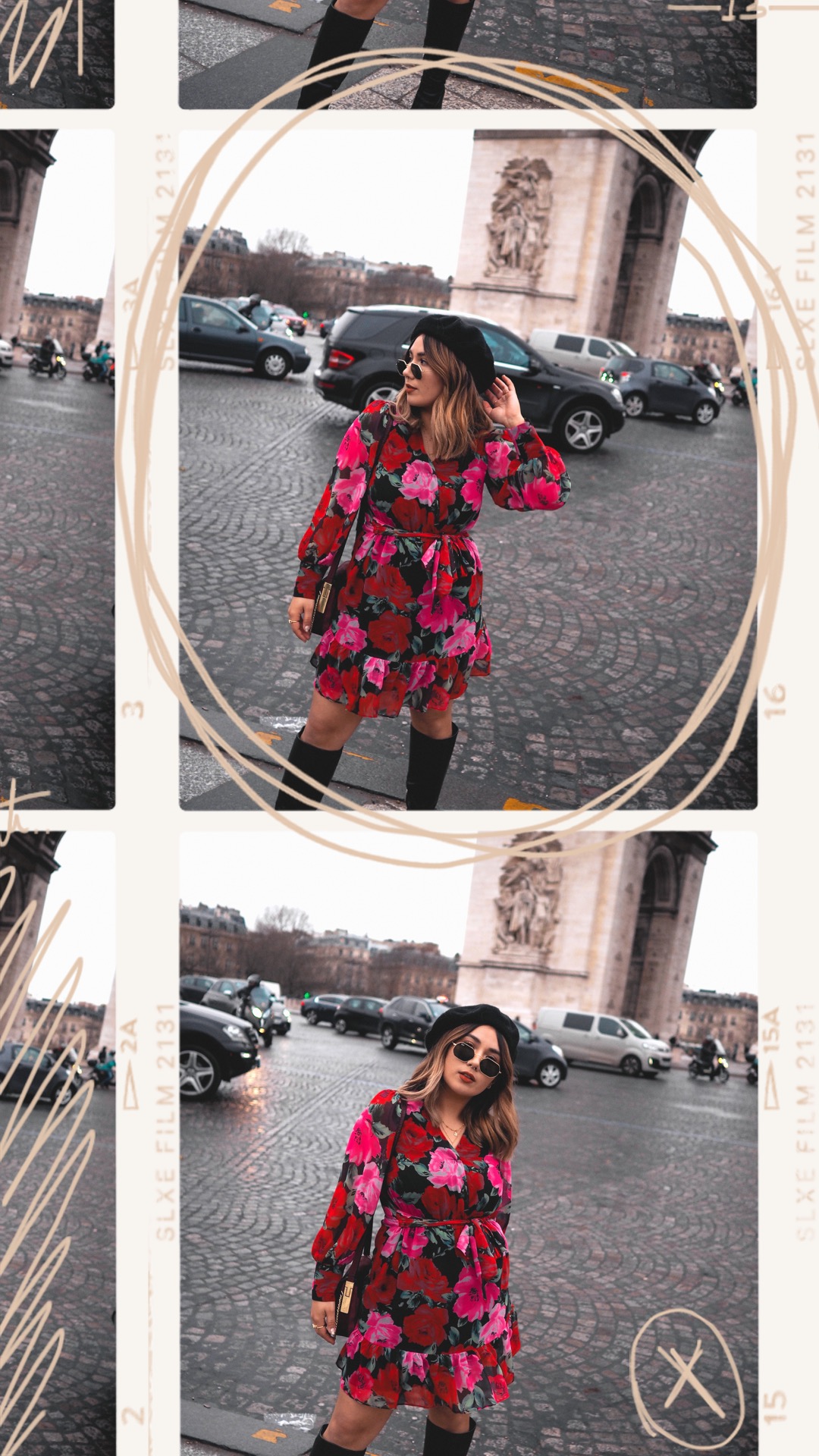 If you’ve ever #ParisJeTaime over on IG (which I’m guessing you have if you’re over here) you’ll definitely recognise this famous bridge. It’s absolutely beautiful in-real-life, and it does make for a cute photo opp too. Unfortunately, at the time of our Pont Alexandre III shoot it was gale force winds and this meant we were slightly restricted photography-wise. Butttt I think we still nailed the shots. We managed to get a few walking on the bridge as it wasn’t too busy, even at 3pm. Aswell as the view from the side of the bridge showing all the architectural detail.

Top Tip – From personal experience, this bridge is better experienced in low wind. Oh, and if you shoot West on the bridge you can get the Eiffel Tower in the back of the shot! 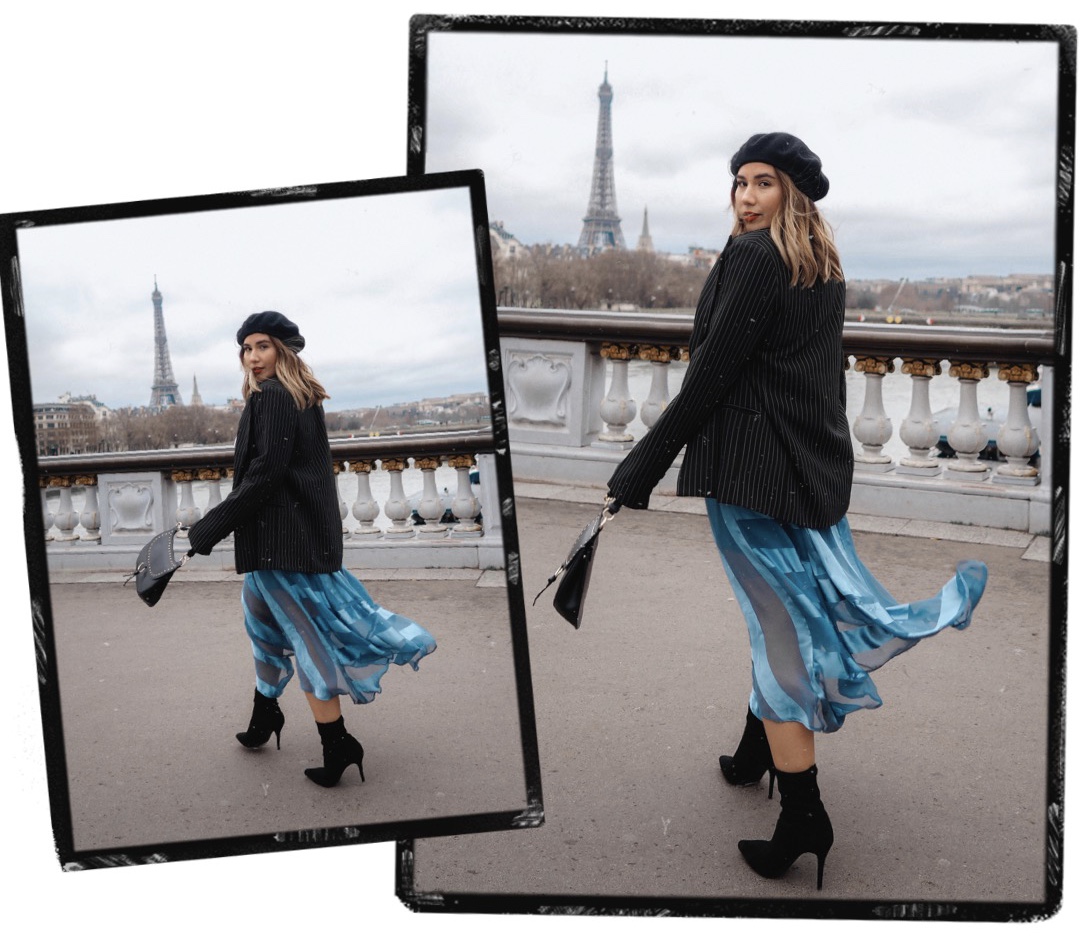 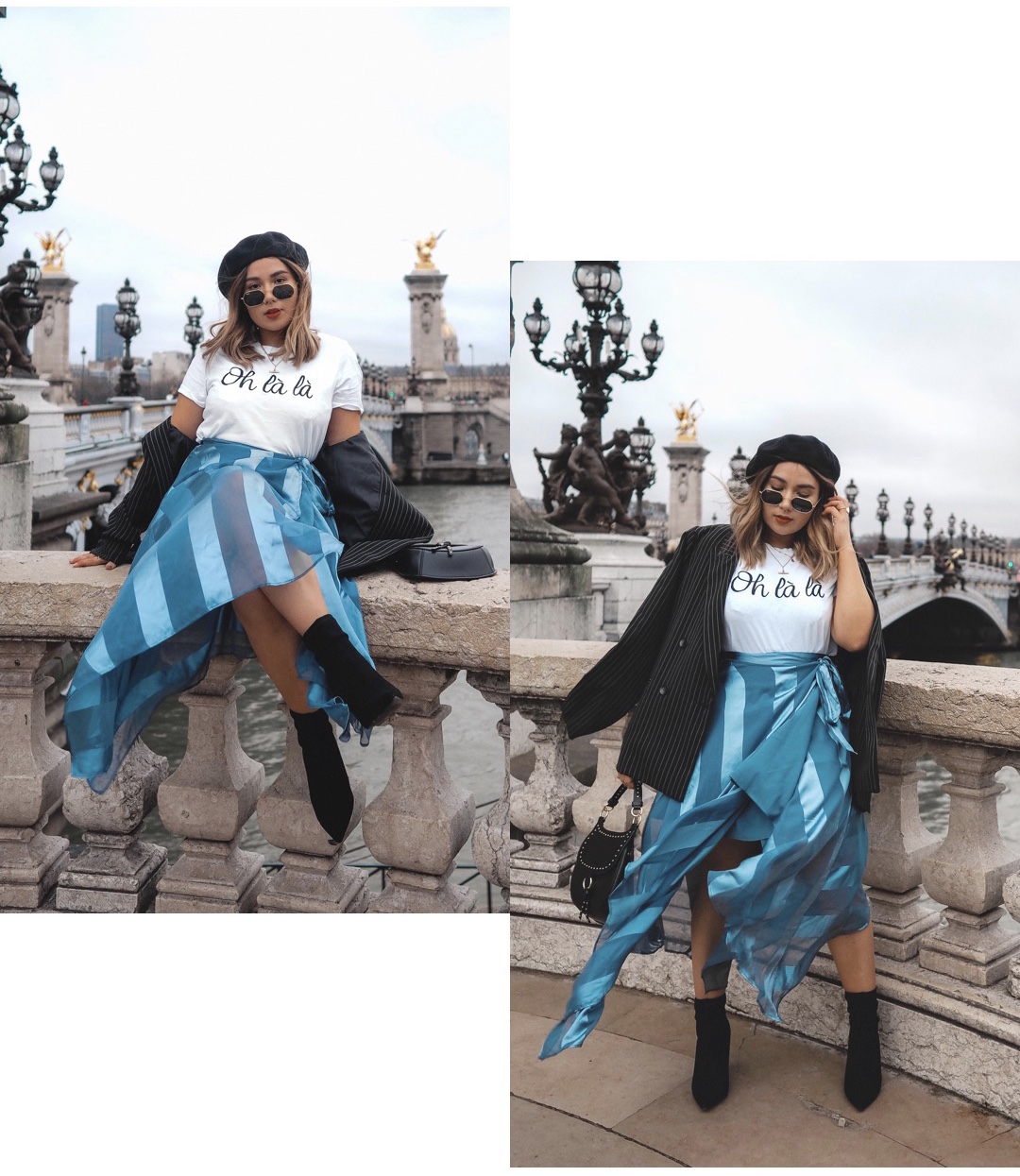 There are so many retro metro stations dotted around Paris, and we happened to stumble upon this one located in Alma-Marceau. We ended up having a slight mare in Paris as the metro was striking, so getting around was a little more stressful. Silver linings and all that, we managed to get metro station shots with no one in! Definitely a you-win-some-you-loose-some kinda moment, but I was quite happy that we made light of the strikes at the time and managed to get some cute shots in too.

This was definitely a first thing, AM, bright and early, shot location. We were up and at the steps facing the Eiffel Tower at about 8.30am (winter sunrise) and we were the first people there. Not soon after, more people turned up to get their shots but it was particularly bad weather and we got lucky with the lack of crowds. You can take photos at the bottom of the Trocadero steps, on the slant (v. popular) and at the top.

Note – Please do be careful trying to get these shots on the ledge as there is a significant drop underneath. Just like you usually would, make good choices and don’t do anything that would danger yourself!

Out of all of these shoot locations, this one was the most quiet and magical. Avenue De Camoens is slightly more out of the way than the Trocadero, so a lot of people don’t bother with heading here after getting ~ that shot ~ at the Trocadero Steps. It’s a small cul-de-sac road which leads onto a balcony, lines of Parisian apartment buildings, and the Eiffel Tower peeping out in the background.

Top Tip – As it’s so quiet, it’s a lovely little walk which would be adorbz to share with a loved one. It’s like having your own private Eiffel Tower viewing balcony. (I will 100% be taking Alix for a stroll down here)

One of the most instagrammed spots in the whole of Paris, the Rue De L’Universite is an incredibly popular photo spot. So popular in fact, if you want a photo without a soul in sight, you’d have to be here bright and early on the dot. It is busy with tourists and photographers getting the shot, but I must say, it really is a fab photo opp. It is a very “take your photo and move on” kinda spot. 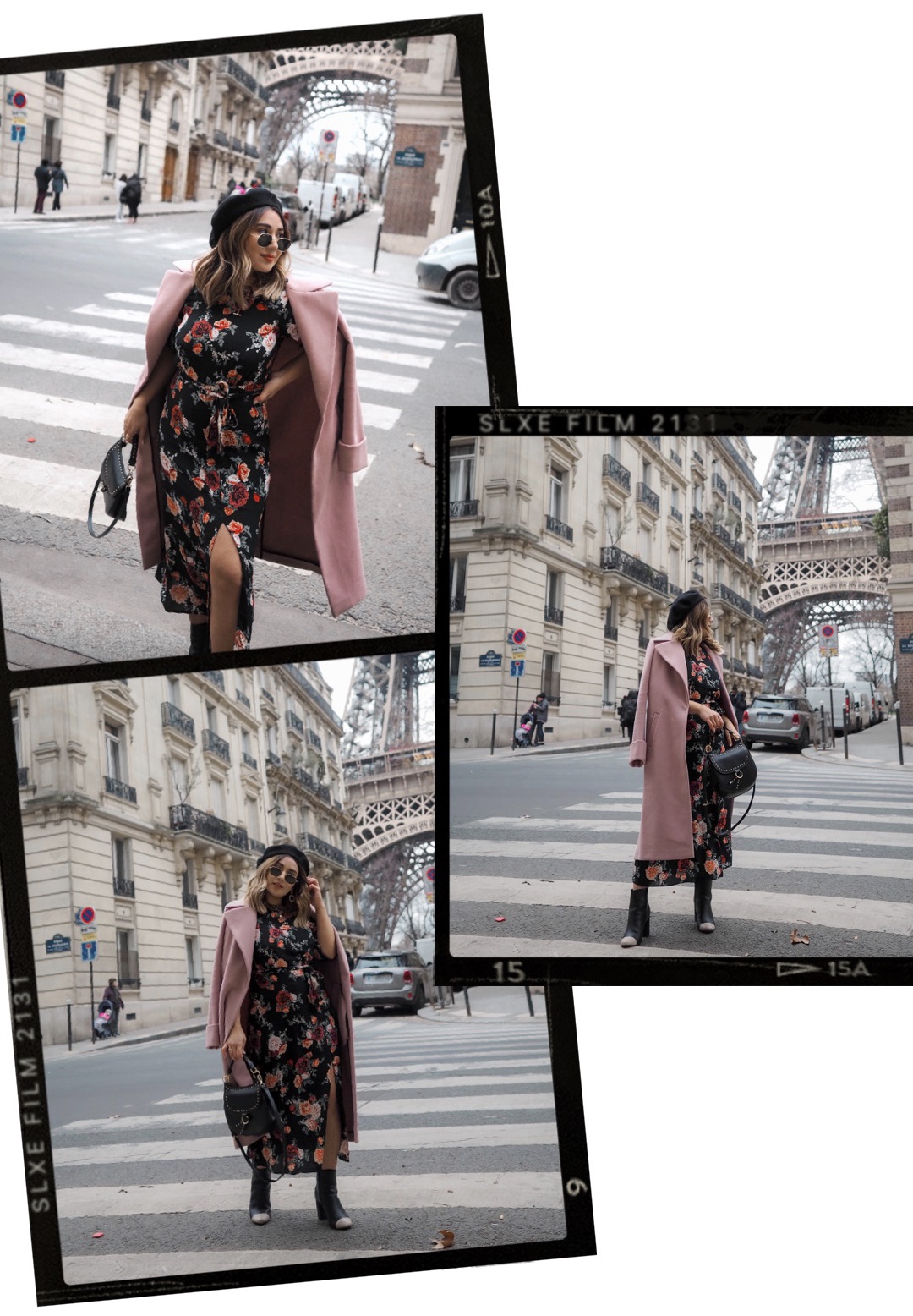 So we ended up getting to the Palais-Royal (located next to the Louvre) at around 2pm, and boy were we expected hoards of people in the backgrounds of our shots. Turns out, everyone in Paris is much more chilled that we had imagined. Actually, the shots we took were pretty void of people! So many people messaged me asking what time we got there to get the empty shot, and were shocked to hear we went in the early afternoon. Maybe we we’re just lucky heading there on a gloomy Tuesday afternoon, nevertheless I absolutely loved shooting here.

Top Tip – Get creative! The Palais-Royal display with the striped columns is actually an art piece called Les Deux Plateaux. The liquorish-shaped columns are an open invite to create a fun shot, see what you come up with! 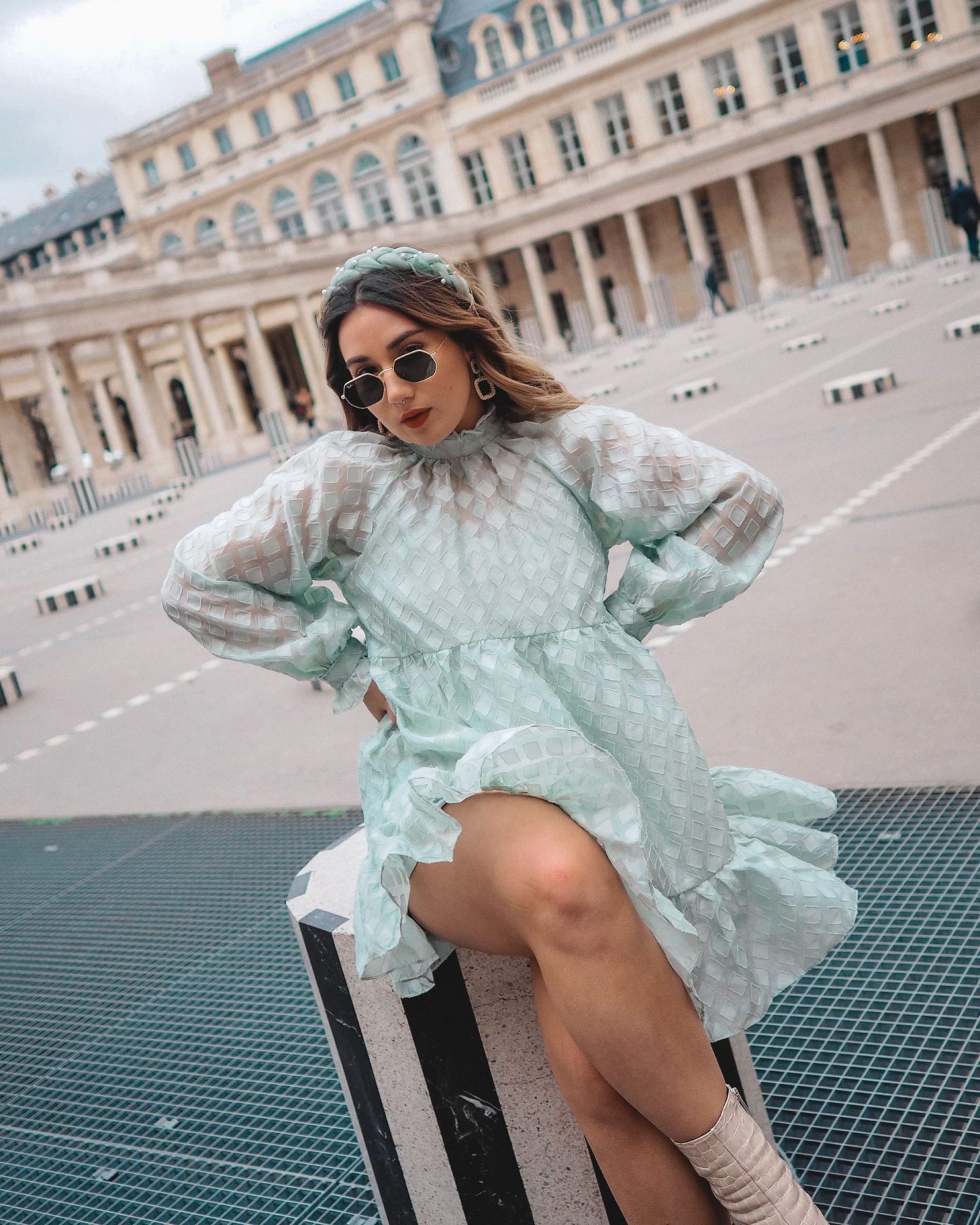 One of the places I was highly anticipating seeing in the flesh was, of course, The Louvre. The contrast between the modern glass pyramids and old Parisian architecture is definitely marmite opinion, but I personally louvre it. (I’m not even sorry) It was quite busy here, but that can be expected on a weekday afternoon, so we waited around for people to clear out of the shot to take a few photos and we got some with the Pyramids in the background. The old buildings are featured much less on the ‘gram, but I spotted some Tumblr-esque graffiti on the wall and just had to get a shot. I really can’t wait to come back and see the Louvre again on my next visit to Paris, it really is beautiful. 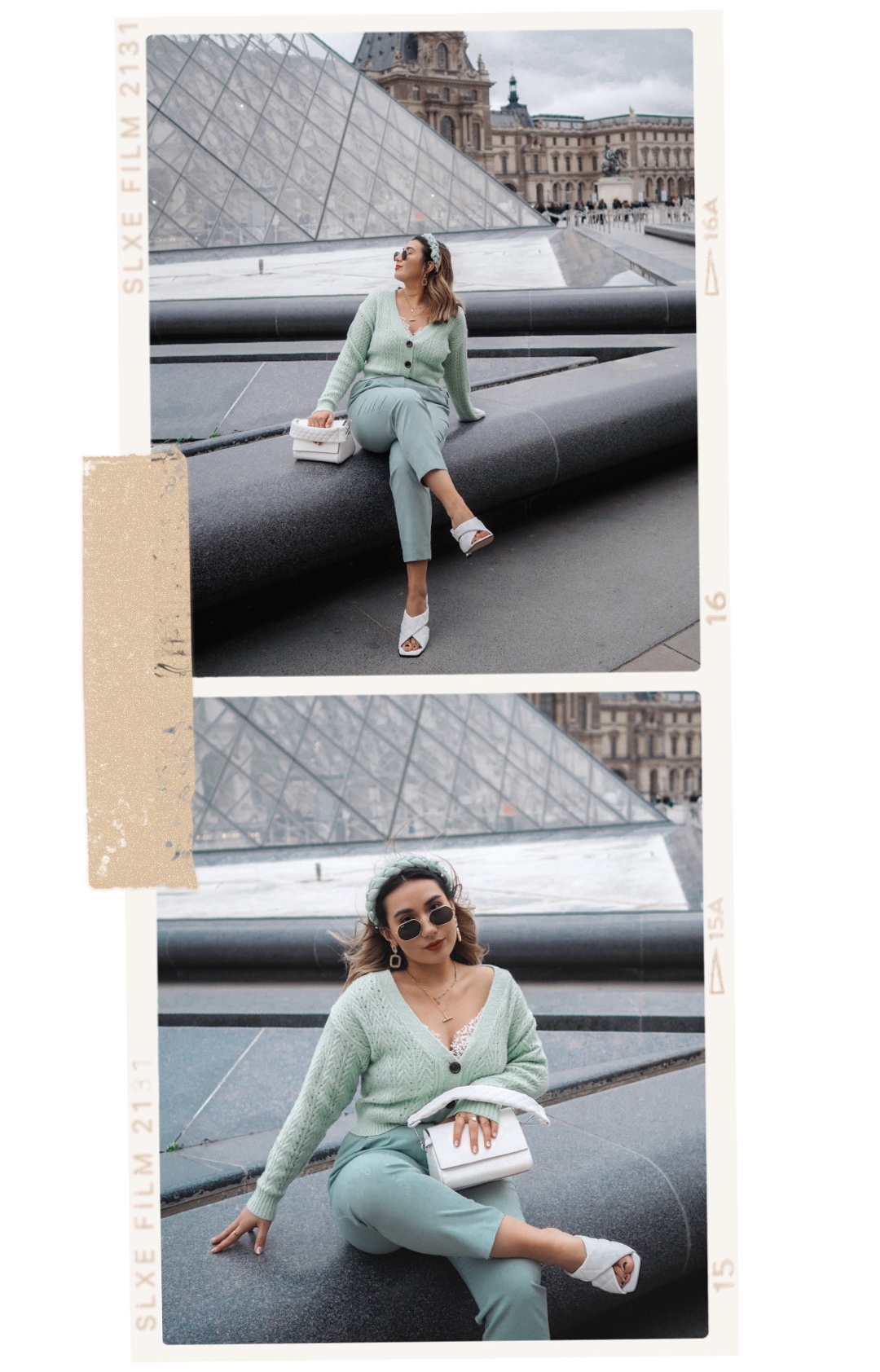 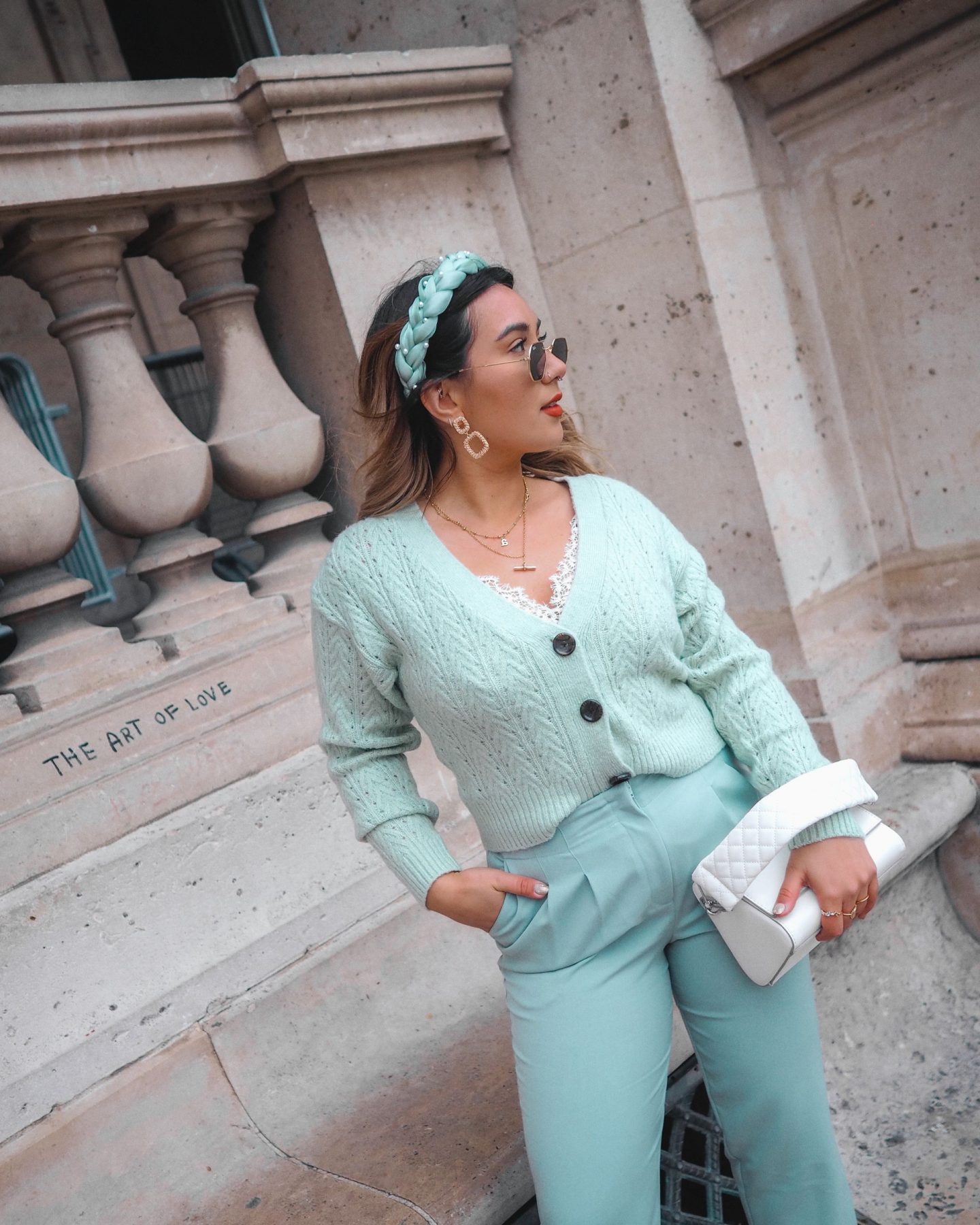 One shot that I was 10/10 desperate to get was some cool Paris-vibezzz street style shots with postcards and/or a coffee. Turns out, we nailed both. I had this spot in my IG Saved “Paris” folder for months and couldn’t believe I’d actually be able to get a photo with these vintage postcards. This book shop is called Librairie Delamain and is located on the street between the Palais-Royal and the Louvre. Not only do they do cute vintage style postcards, but also funny card, and many different types of books. Some of the books in the window were dated and looked rather impressive. We shot here at the end of a long day and it was rather busy but it’s cute to get a few snaps if you’re into that retro Parisian vibe! 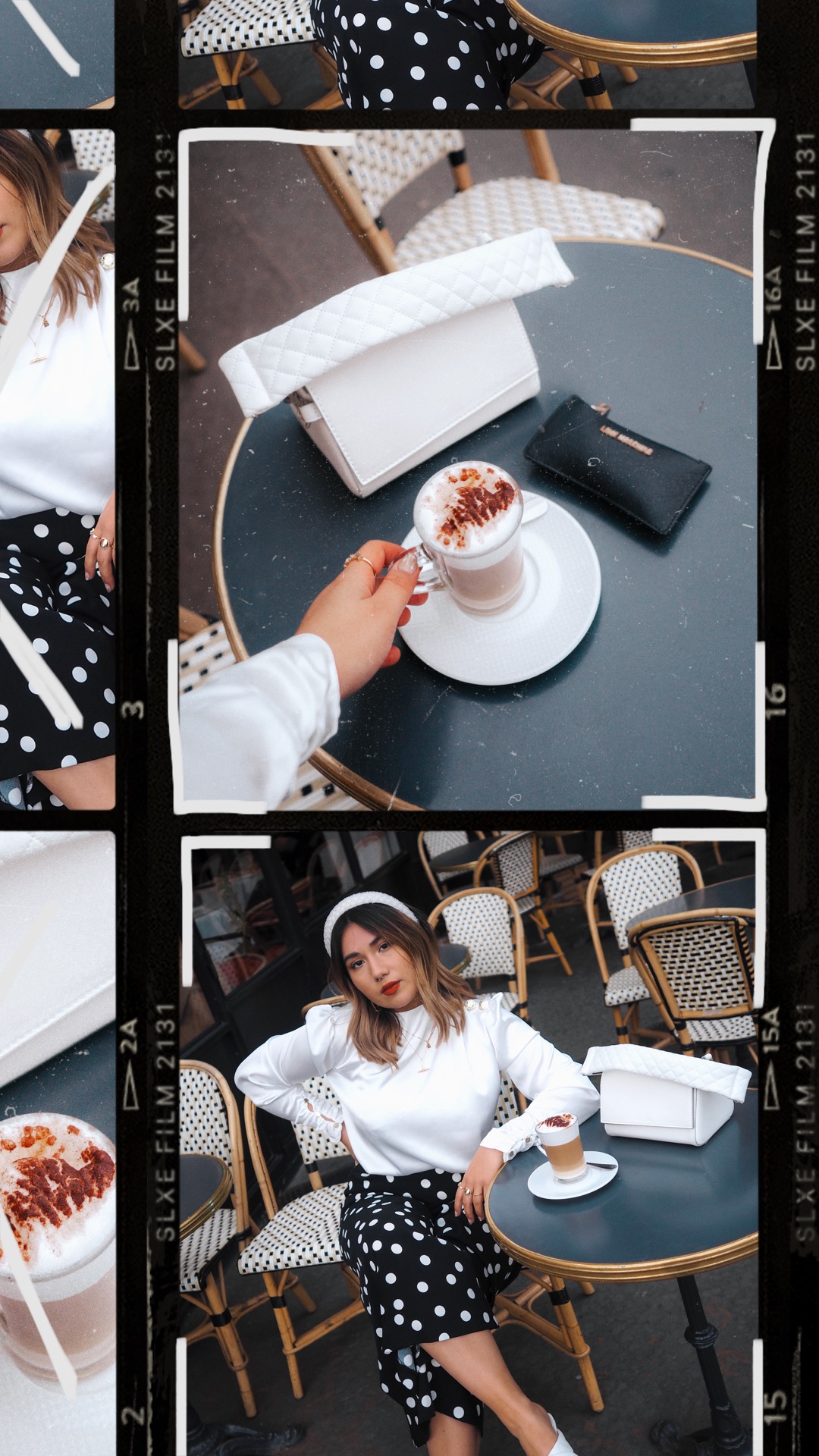 ~ FIN ~ I hope you found this ultimate Instagram guide to Paris somewhat helpful and/or inspiring. Even though I was slightly apprehensive about the trip at first due to the political unrest in the city as of late, I must say, I was completely won over by Paris. Totally head over heels! Paris is a city bursting with beauty, magic, and composed of so much history. So I’ll definitely be back to explore more of this beautiful city very soon. Now, how to persuade my other half, hmm…

Have you been to Paris before?
Which is your fave spot for ‘gramming?

A Photo Guide To Rome

5 Things To Do In Verona

How To Do Amsterdam On A Budget