When I hopped across the globe to Los Angeles, I really had one thing on my mind – the amazing american cuisine. I had never had the opportunity to go to the US before, and it was finally my chance to taste all the wonderful food that I’d only ever seen on tv, and obviously on Instagram. From giant pancakes, to the perfect all-american hamburger – I needed to try it all. So here are my top foodie picks for any food-enthusiastic travellers out there! 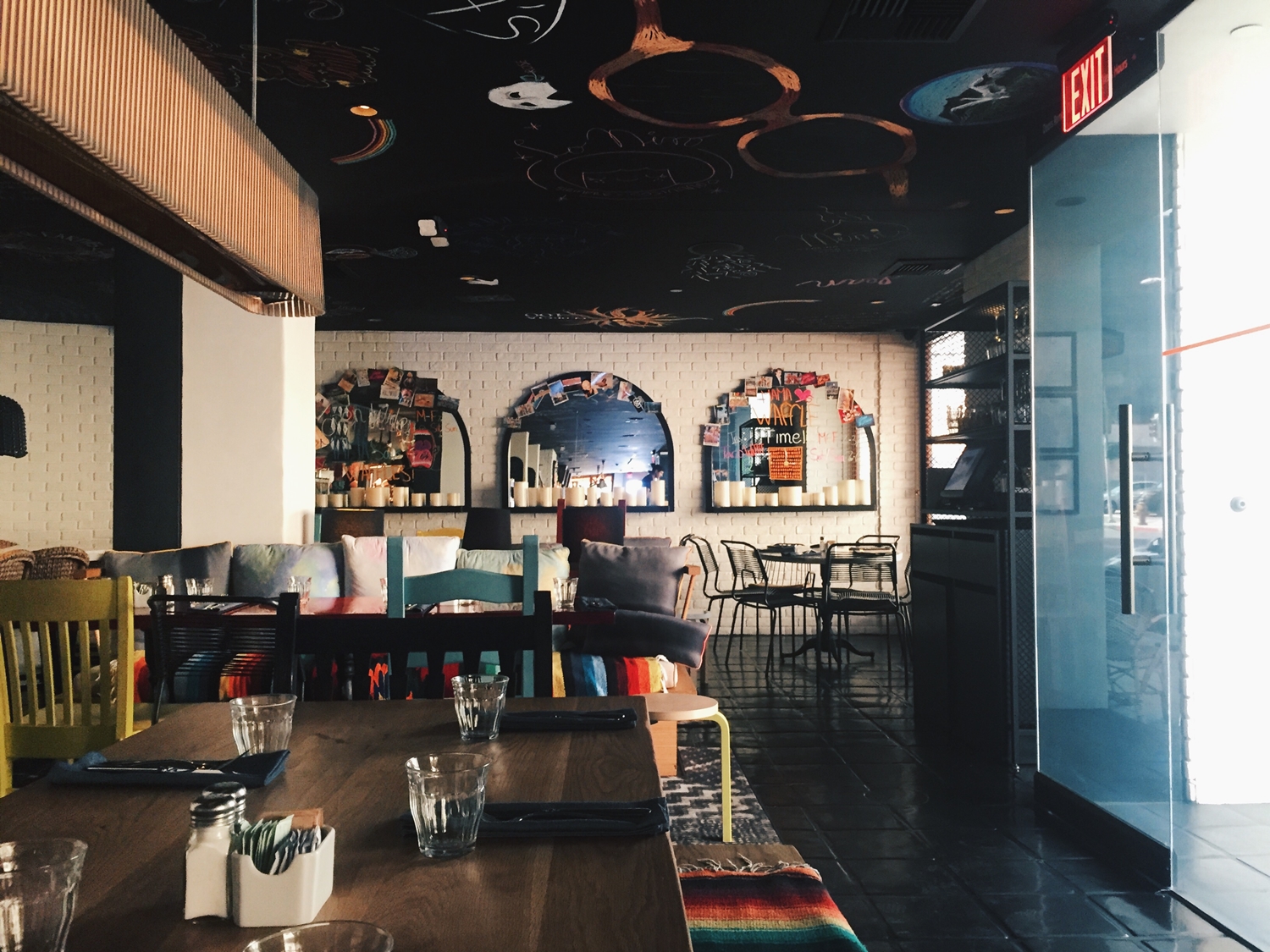 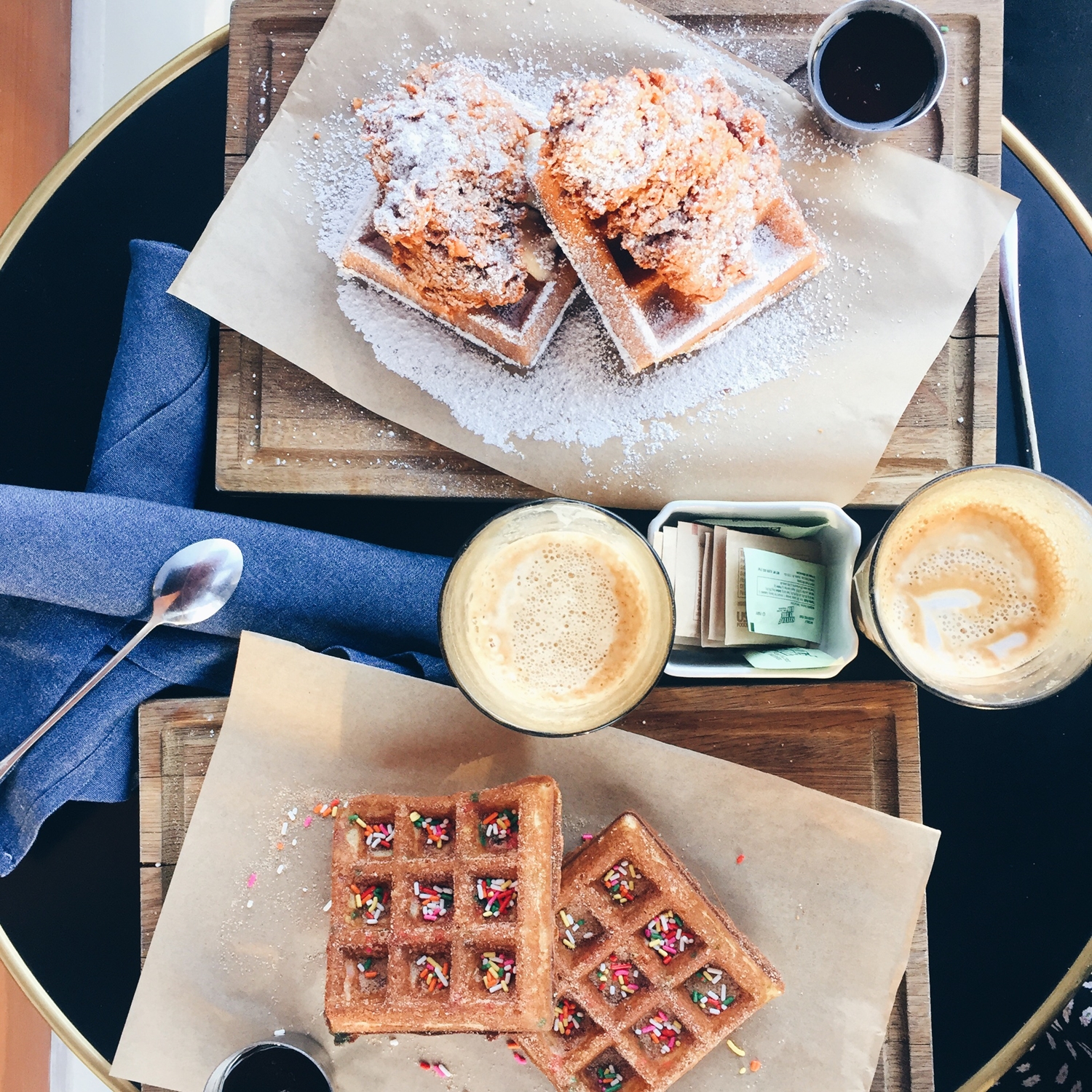 Mama Shelter LA was actually the hotel that we were staying in, just off Hollywood/Vine. When we woke up on the first morning of our trip, we decided to get something to nom on close to home so we could do a bit more last minute planning. Luckily our hotel had free Wifi, so we grabbed a table outside and soaked up the early Californian rays.

The entire menu looked ah-mazing, but both my boyfriend and I were suckers for the American style fresh waffles on offer. I ordered the Churro Waffle, which came toasty, warm, and covered in cinnamon sugar. Whilst my boyfriend opted for the more unusual Fried Chicken Waffle, which came topped with maple butter and icing sugar – I was slightly jealous. Obviously I got many mouthfuls of his food because of #girlfriendperks, and my god – it was good. 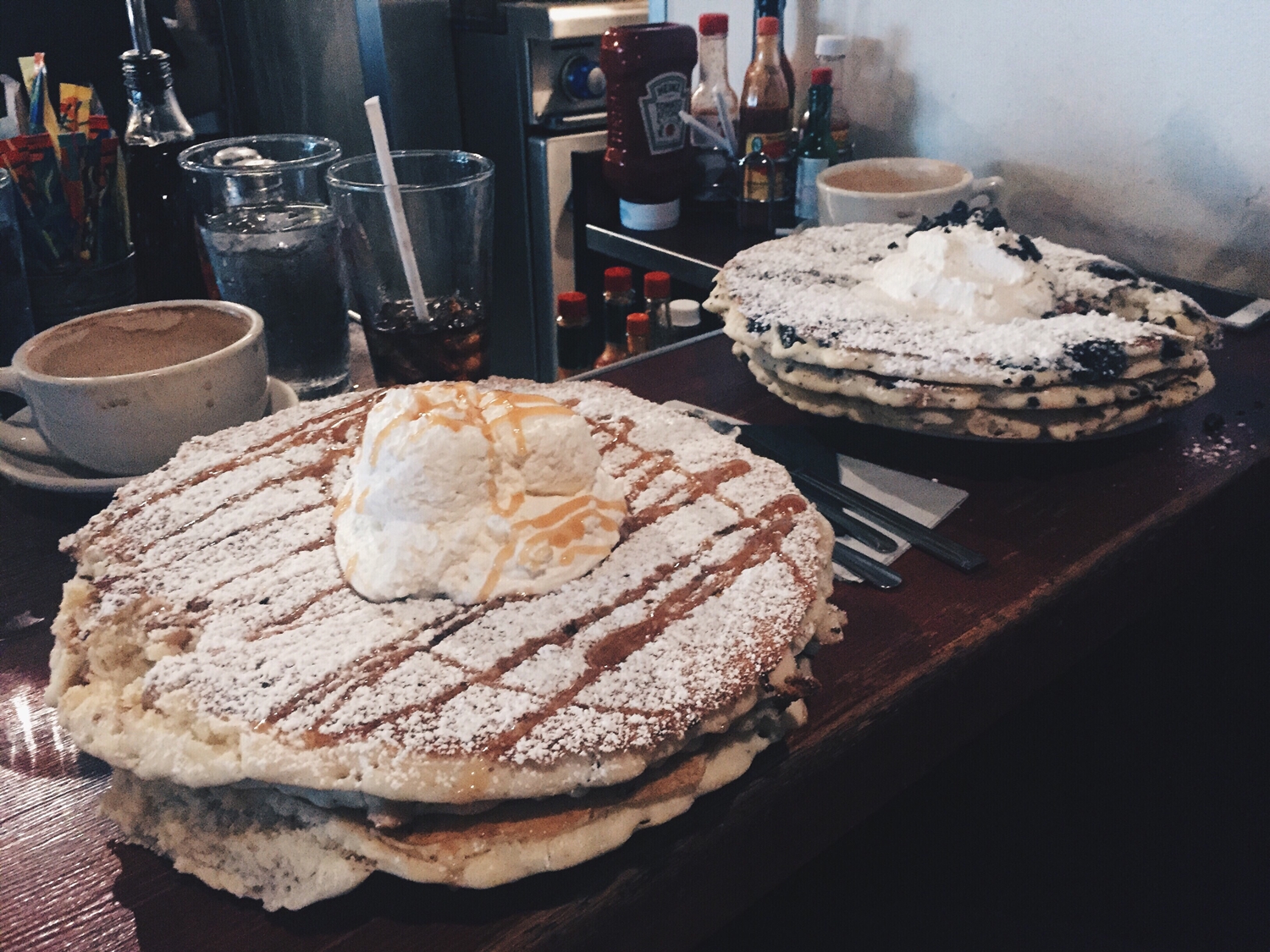 Before arriving in the States, I did my fair share of instagramming searching to get an idea of some places to head to for typical American chow. After seeing numerous #thegriddlecafe posts, I needed to try their pancakes before we left. Luckily due to jet lag, we were both up at about 6.30am every morning, so we ended up heading to The Griddle Cafe for about 8.30am. Even though it was early, it was pretty much full. We squeezed into the final two seats at the far back and waited to order our giant pancakes. I went for the butterscotch ‘cakes, and my boyfriend grabbed the Oreo version.

Even though I knew these bad boys were pretty big, my boyfriend and I ordered one lot each, and boyyy was that a mistake. We stared in amazement for about 30 seconds when they actually arrived (compare the coffee cup above), and ended up making our way through only 1/6 of the plateful. Despite their size, they tasted incredible. It really does sadden me that now I wont be able to eat pancakes in the UK without feeling slightly disappointed.

In the US, it is very commonplace for doggy bags to be offered to you at the end of a meal as the portions are so big. So a lot of people were taking their massive pancakes home – they could have easily fed me for a week.

TIP – When we were leaving at approximately 9.30am, there was a massive queue going down the road to get a seat in the Cafe. So I would definitely head there as early as possible to avoid disappointment (or hours of queuing for pancakes). 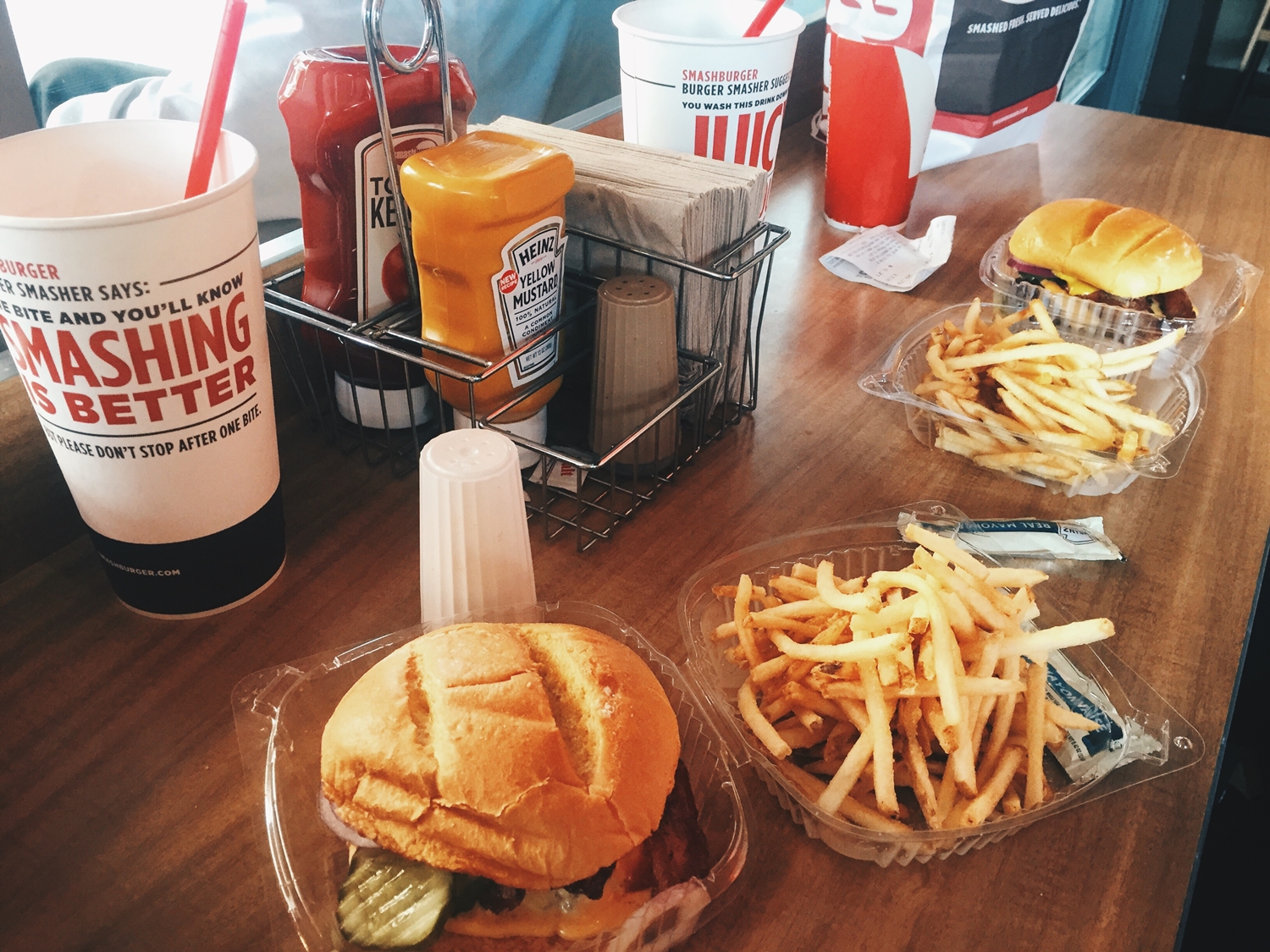 We accidentally stumbled upon this gem near the Staples Center, when we were in dying need of a classic American hamburger. Then, after asking a rather lovely police woman, we knew Smack Burger was the place to go.

As in a lot of US fast food chains, there were many “combo” deals – and I grabbed a waterfall (refillable) drink, a bacon cheese burger, and the best fries imaginable for a nifty $12.00 (£8.50). And yes, the fries really were that good – I’m pretty sure they’ve creeped into my dreams a few times since we got back…

Due to the Lakers game that evening, the entire square was cordoned off and there were special events happening for ticket holders. So we sat and ate our burgers whilst soaking up the pre-game atmosphere.

4. WAFFLES WITH BAKED IN BACON – THE WAFFLE 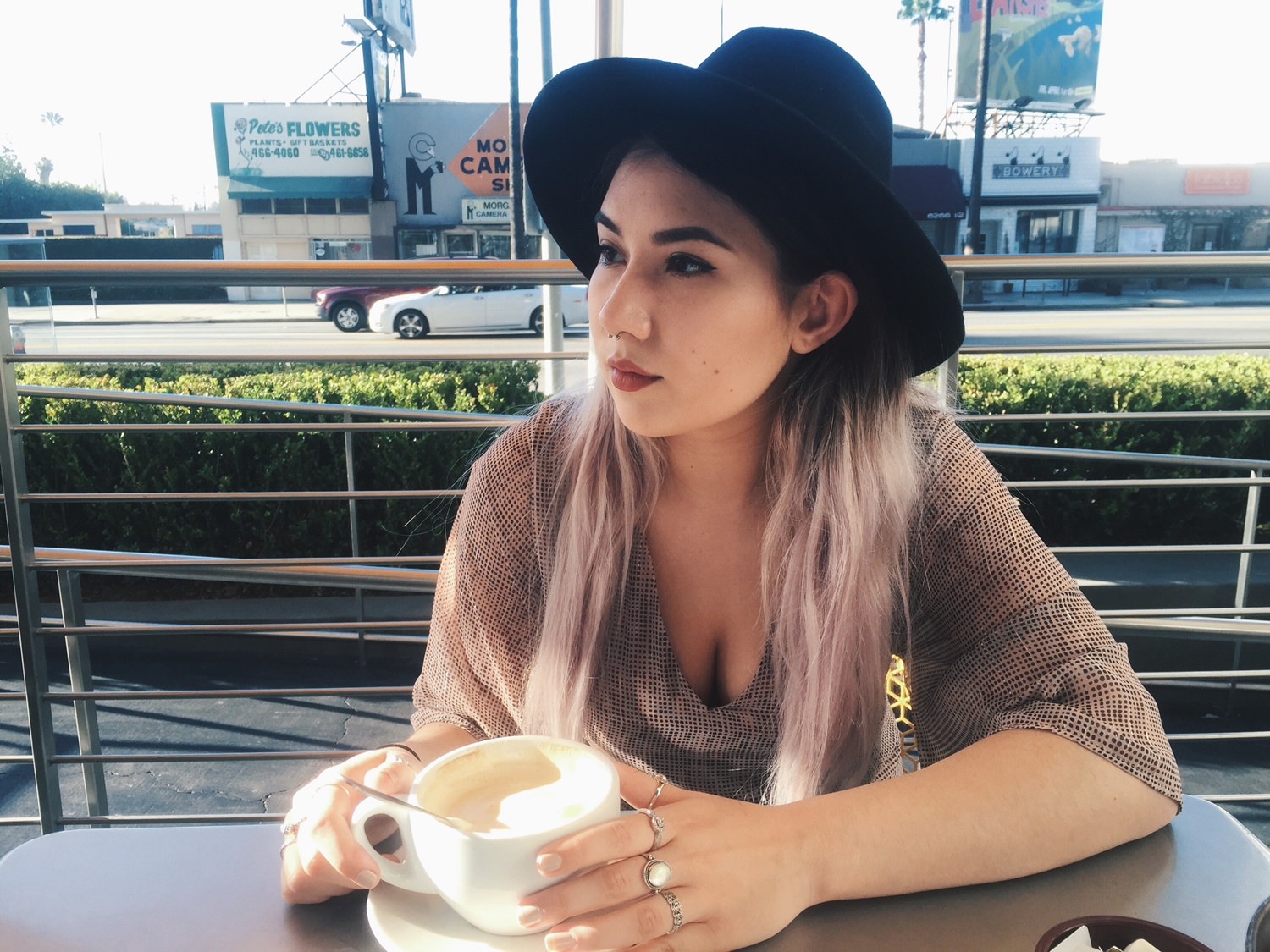 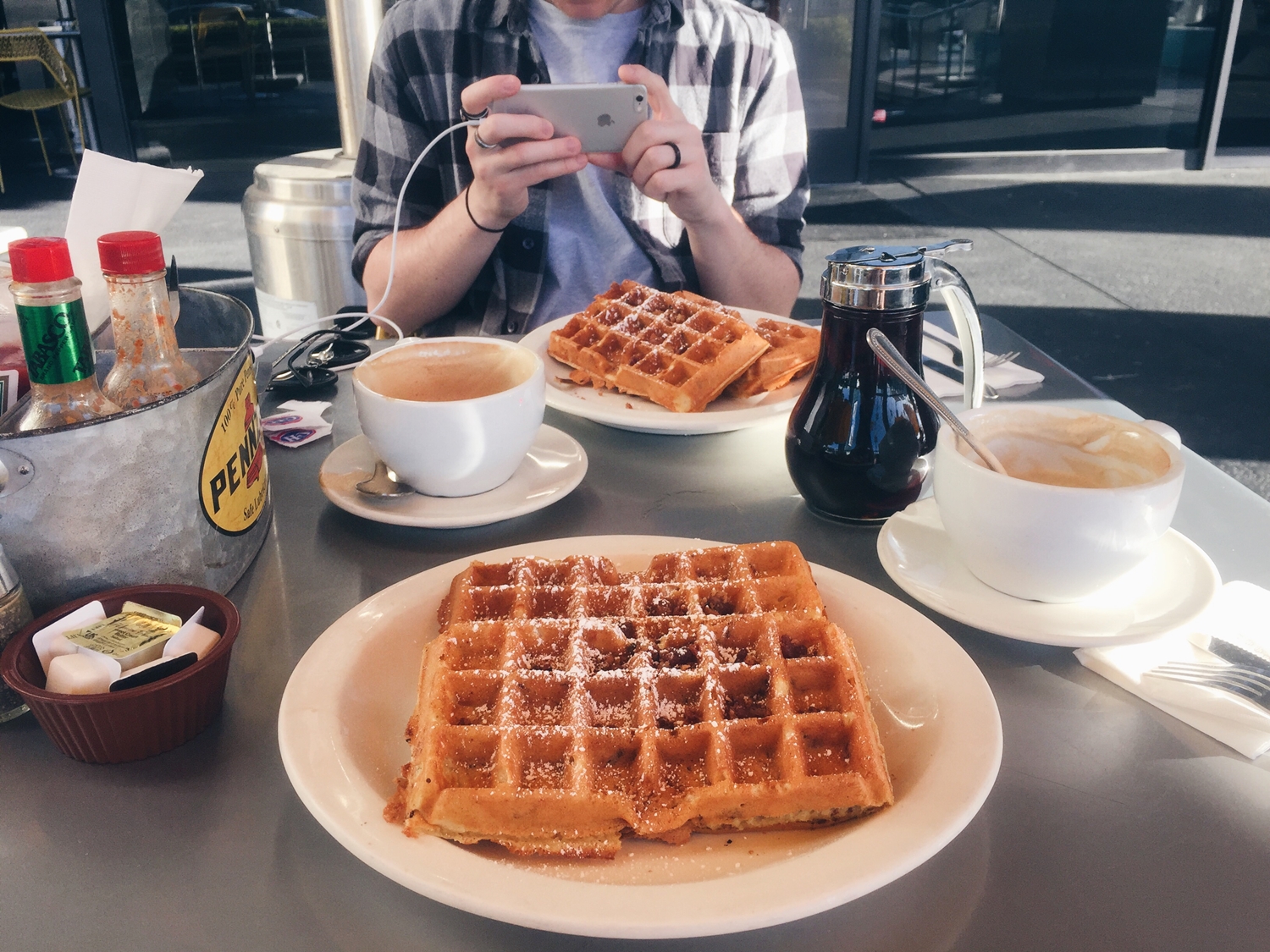 Yup, you heard me. The bacon is inside the waffle batter. Just take my money, The Waffle.

After experiencing the great waffles at Mama Shelter, we allocated a little bit of time in the evening to finding another restaurant where we could get fresh waffle-y treats. Oh, and we didn’t have to look far at all – about two blocks from our hotel sit this little joint which serves 17 different types of waffle. If you have a serious sweet tooth, then the Red Velvet Waffle would suffice, however I’m sure only the brave would order the Cornmeal Jalapeno Waffle – which is served with fried chicken and gravy. We clearly went for the Applewood Smoked Bacon Waffle, and there were no regrets.

The Waffle sits on the main road, so we grabbed a seat outside and actually enjoyed all the noise and traffic for once. Los Angeles is such a loud and vibrant city, so it’s great to take a seat back and appreciate that for a moment.

TIP – Many items come dry, that’s totally normal. Maple syrup and salted butter are provided so you can enjoy your breakfast like a true American. Seriously, drizzle that shizzle. 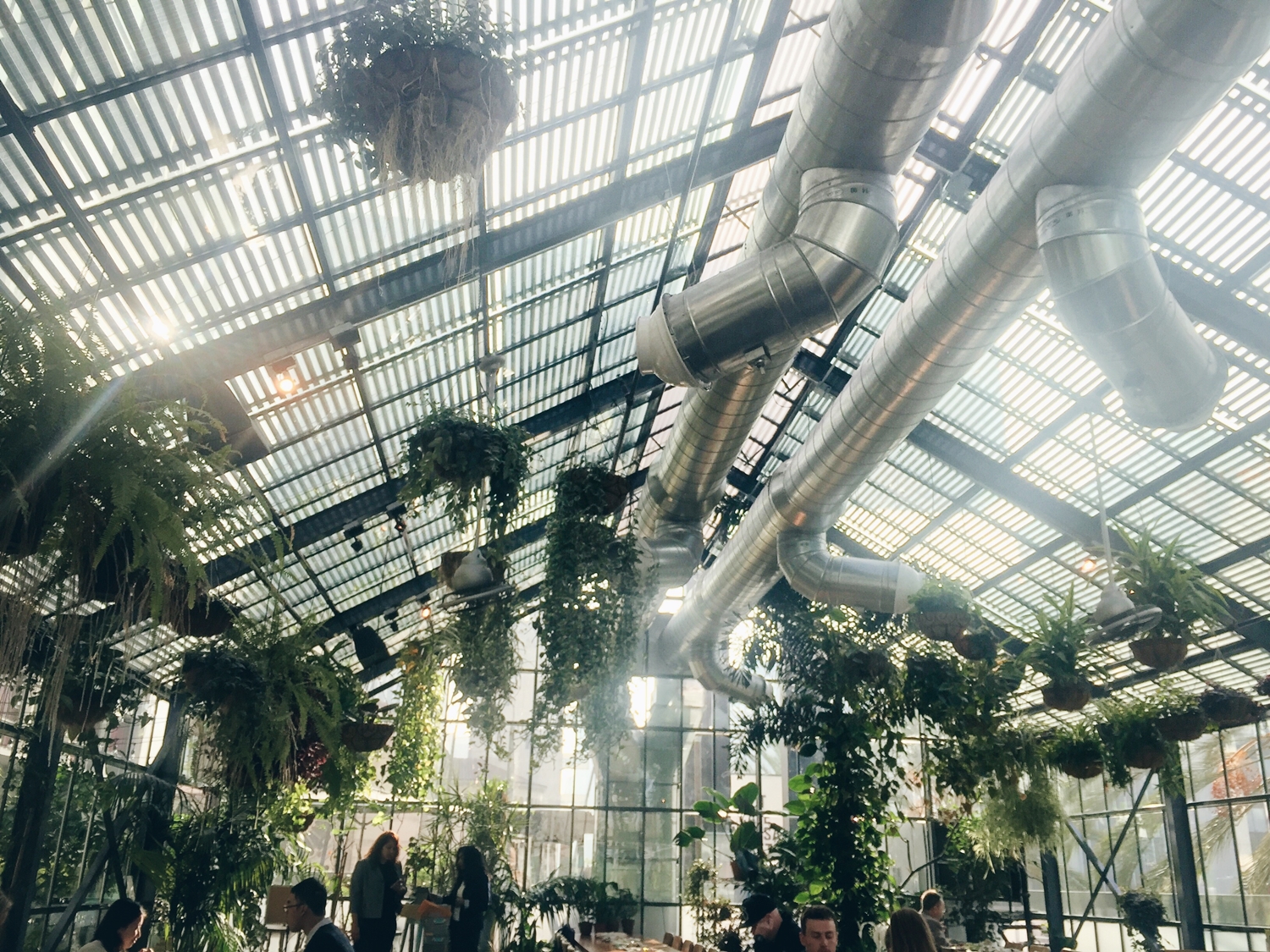 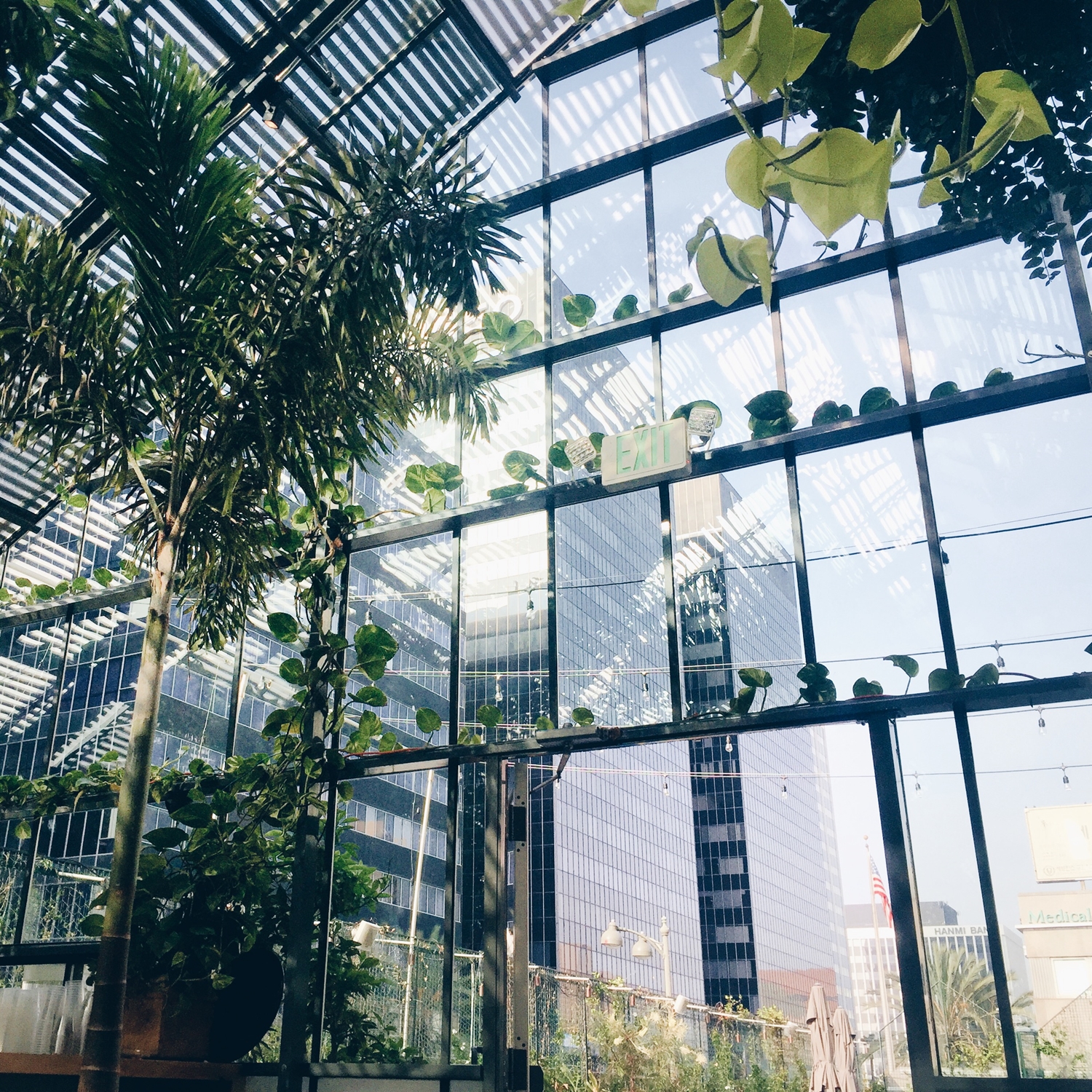 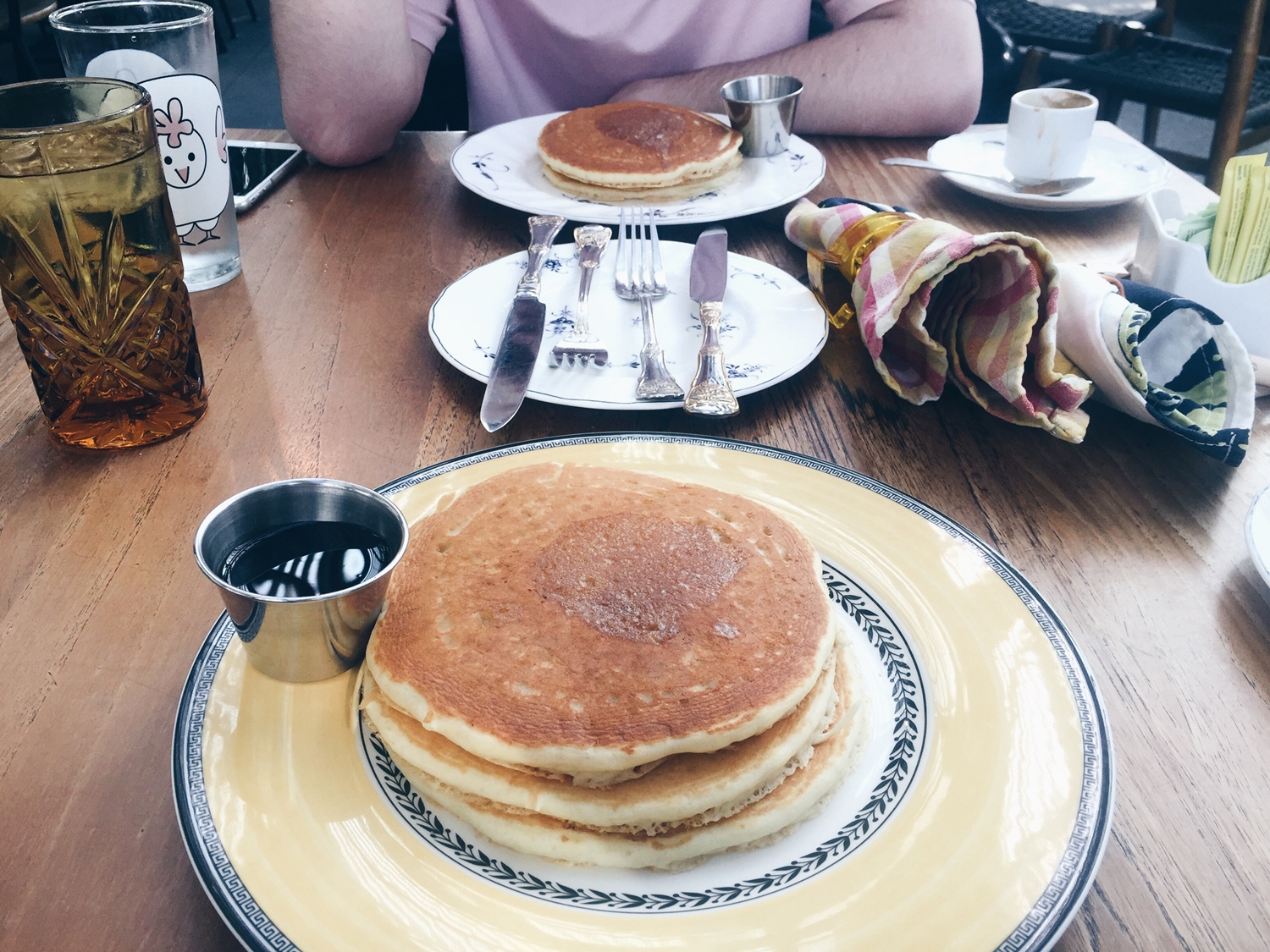 In my opinion, everyone needs to visit The Commissary whilst vacationing in LA. Okayyy, so it may be a little pricey. But I saw it more as paying for the atmosphere, than the food – because that’s really the only way to make sense of it.

In the heart of Koreatown, Downtown LA, The Line Hotel is one of the most Instagram famous hotels in the area. The entire building looks like it was made to be photographed, and Instagrammers from worlds away flock to the hotel to enjoy the raw, minimalistic vibes.

However, the real gem of the hotel is the rooftop restaurant and pool, The Commissary. The actual restaurant is in a beautiful greenhouse full of foliage – and it really does set the scene for a beautiful morning. The pancakes were really lovely, but I would say grab a coffee and chill by the poolside – you don’t see this often in the middle of the city!

TIP – Use the cheap public transport system! It’s easily accessible, and is a stone’s throw away from the Wilshire/Normandie Metro (Underground) Station.

If you were in LA, where would you be eating?

You may also enjoy: