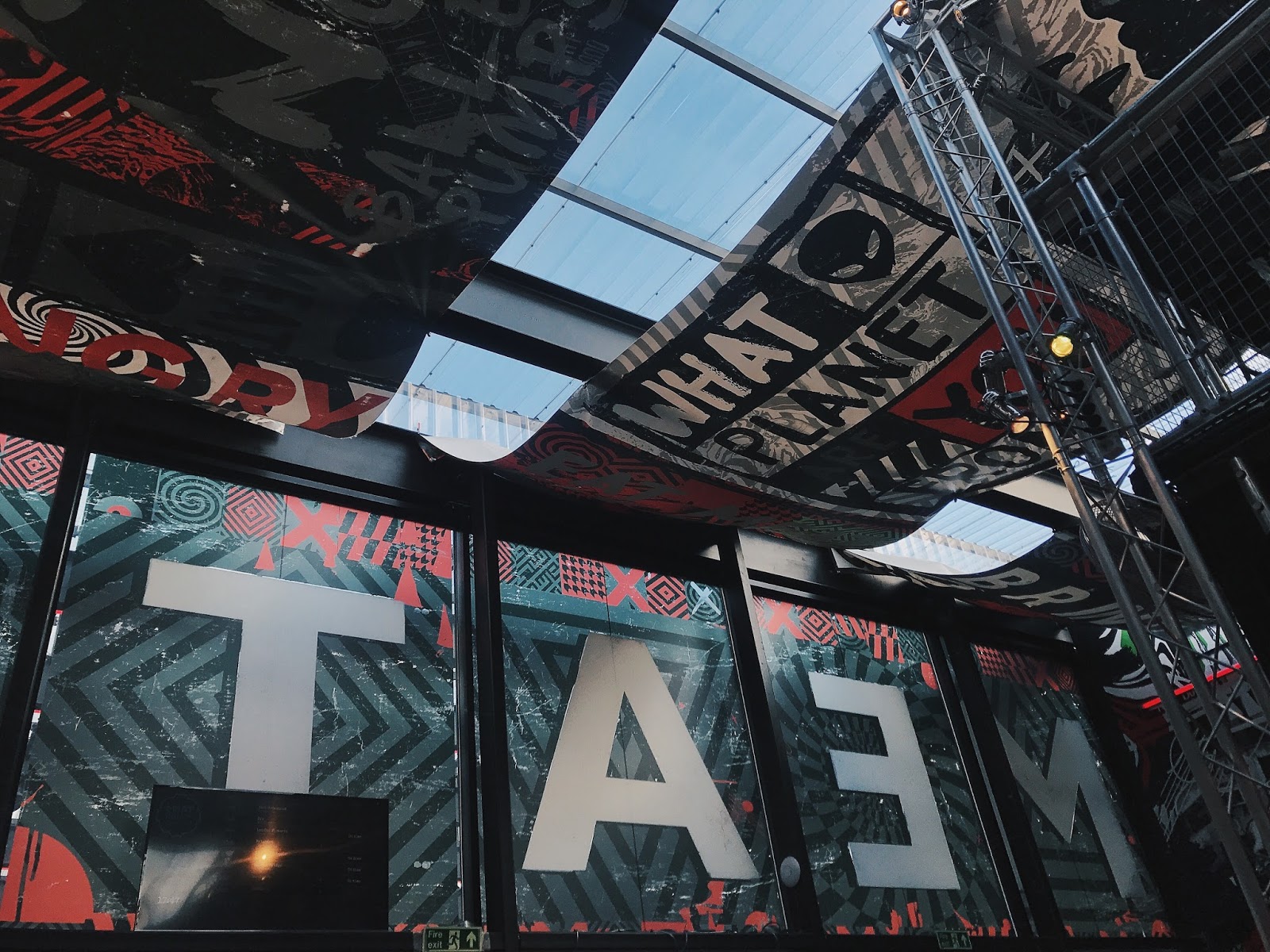 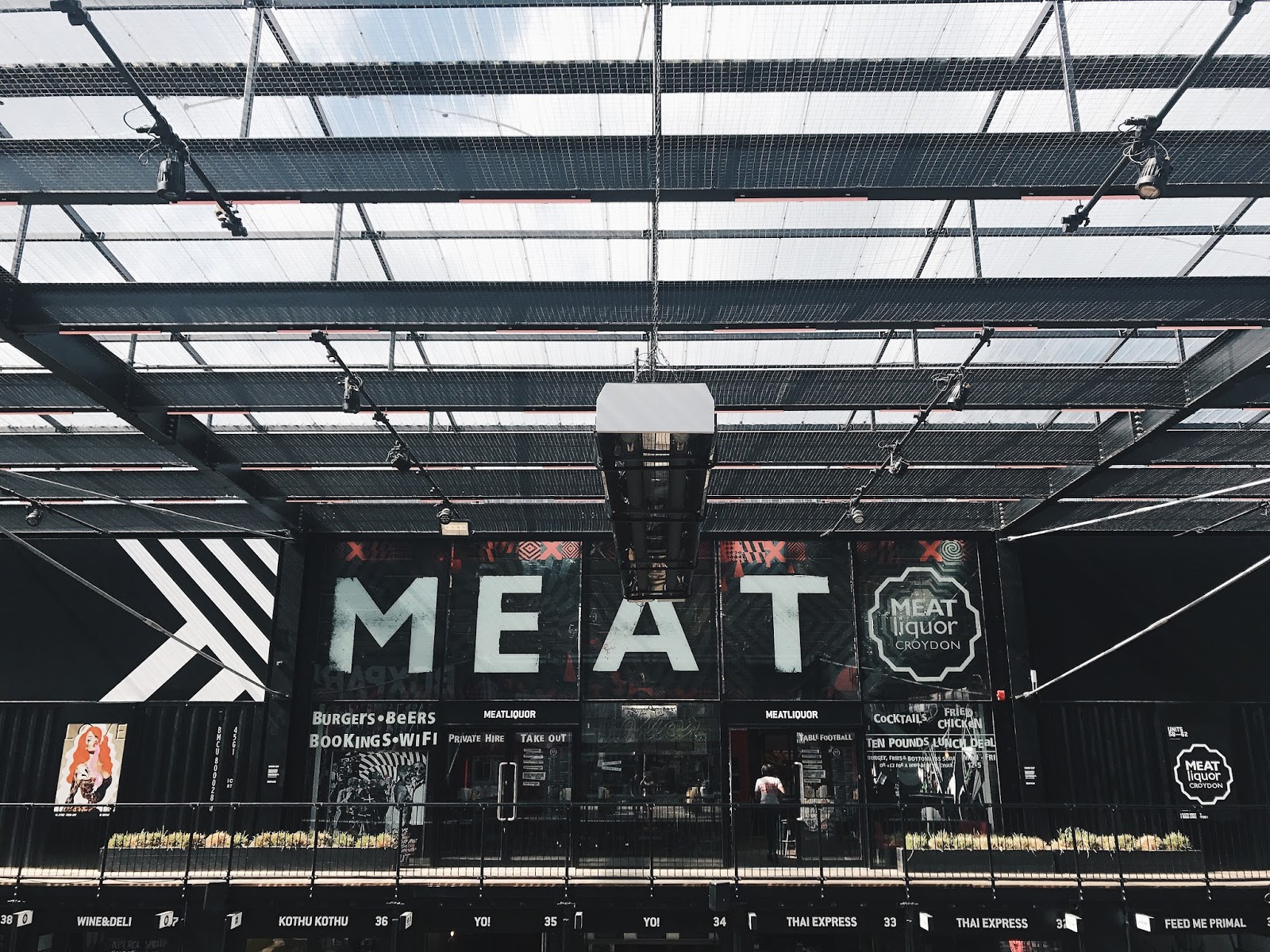 One for the meat lovers (sorry in advance to any veggie/vegan readers out there, but I do have some exiting foodie instalments coming up for you guys!) – MEATliquor has a reputation for being the go-to meat enthusiasts’ hot spot for great grub and a fab urban vibe.

Even though MEATliquor as a chain/brand has been local to the London area for a hot moment, I haven’t ever ventured in to sample what they have on offer. It’s definitely a vibe that appeals to me, with the decor showcasing a real urban/carnival feel to it. The bar brings “shack” vibes to the place, whilst a foozball table, photobooth, and Man Vs. Food – esque eating challenges add a little somethin’ somethin’ that makes MEATliquor a unique place to grab a bite. 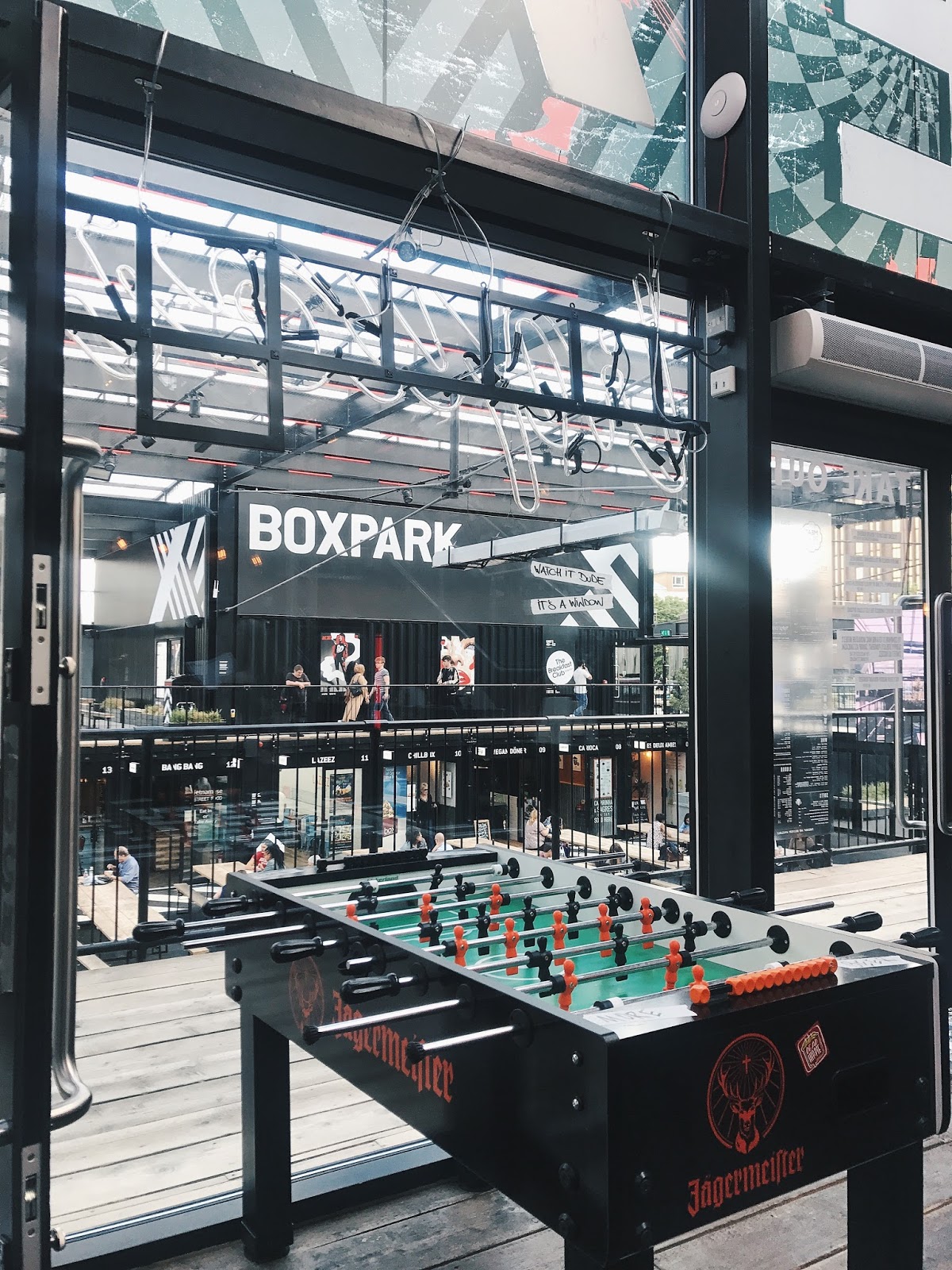 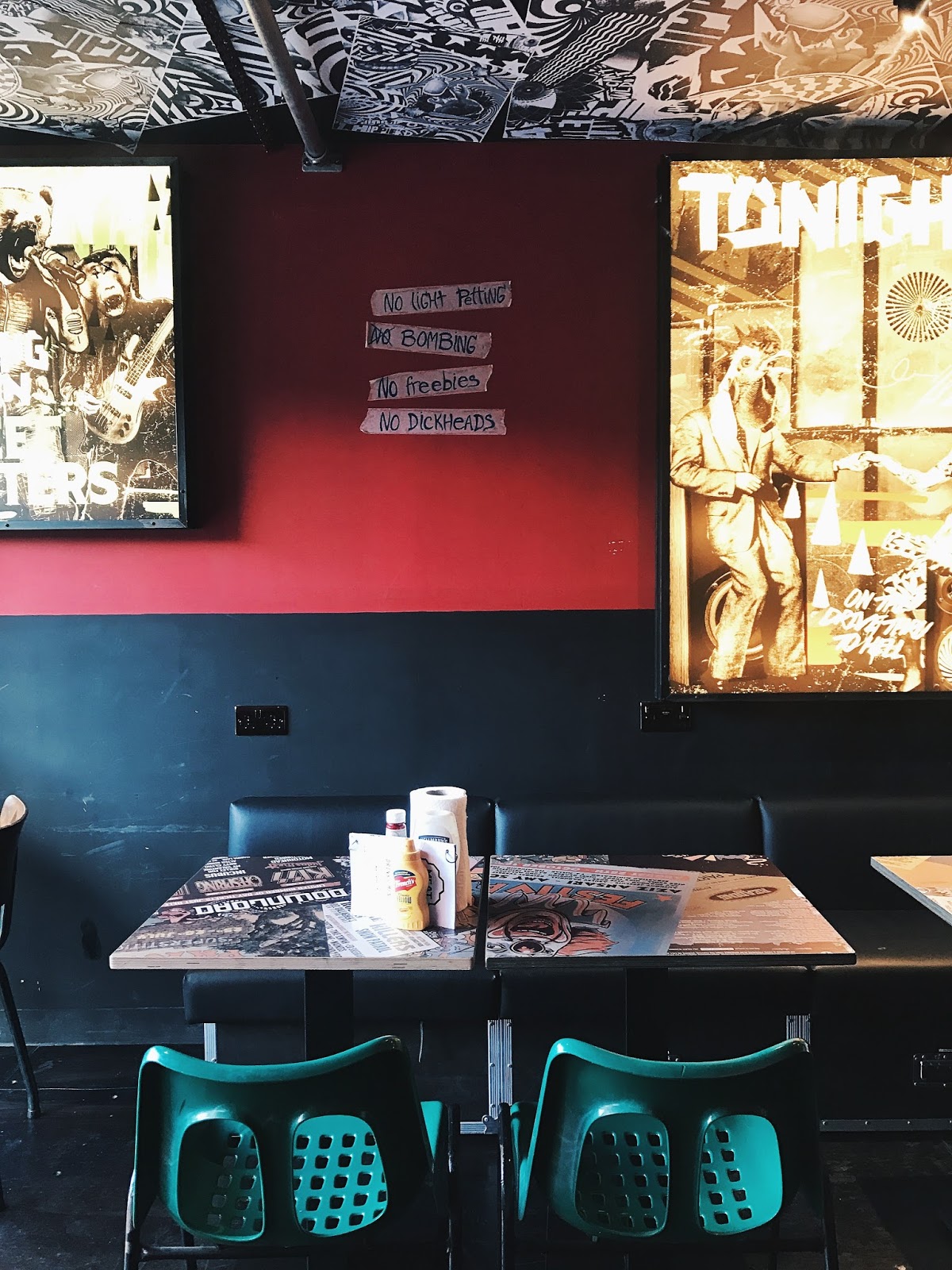 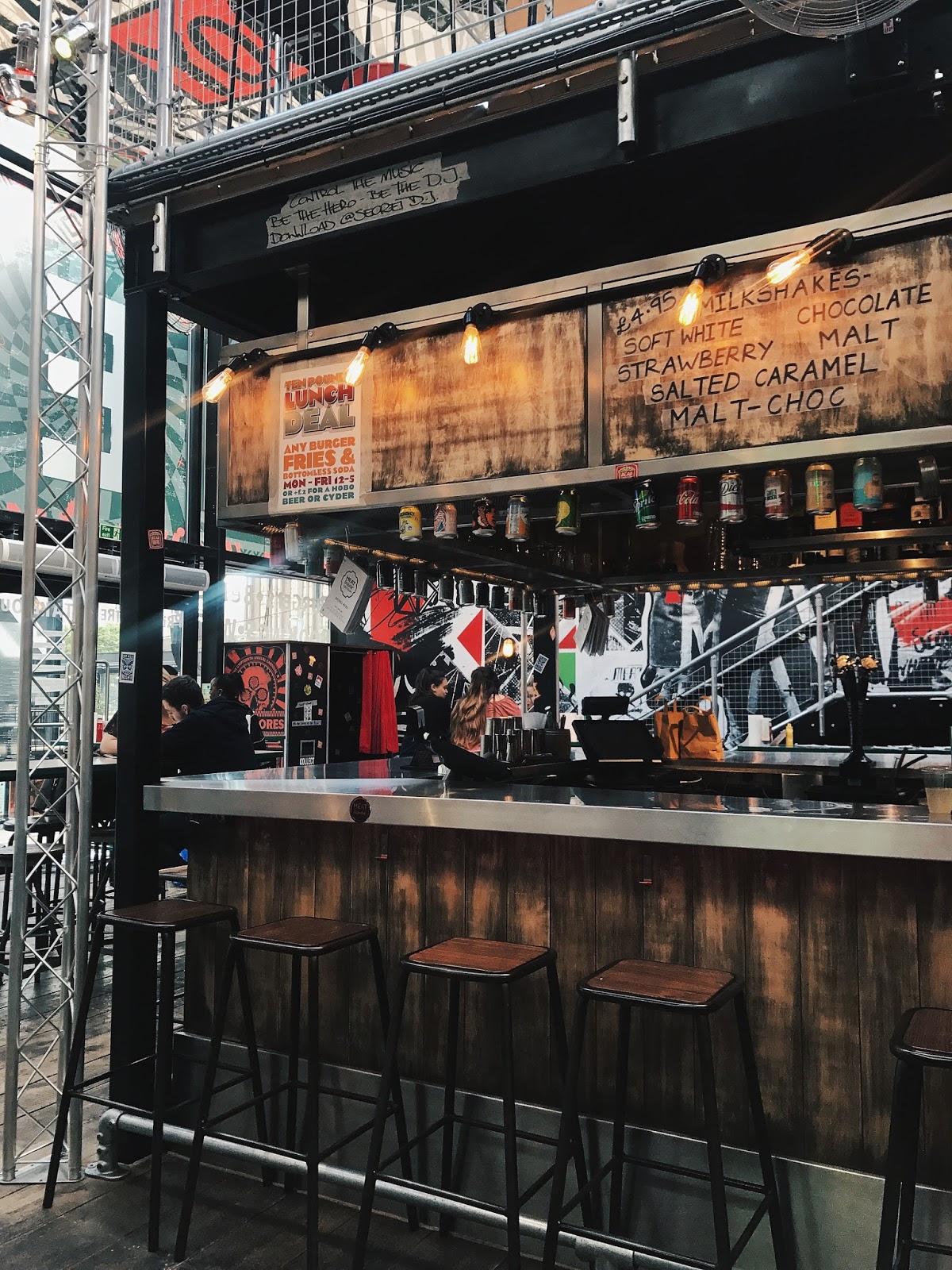 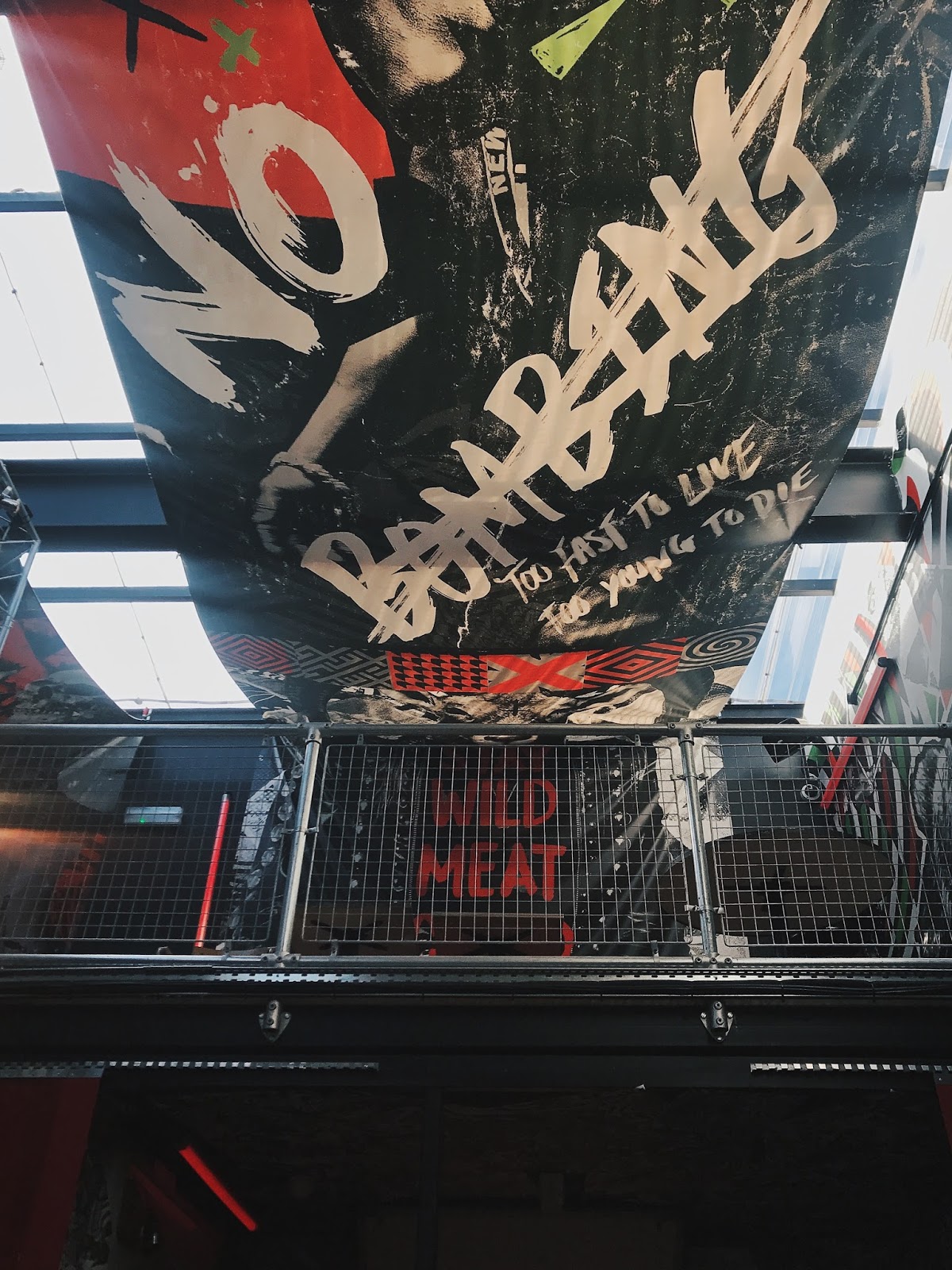 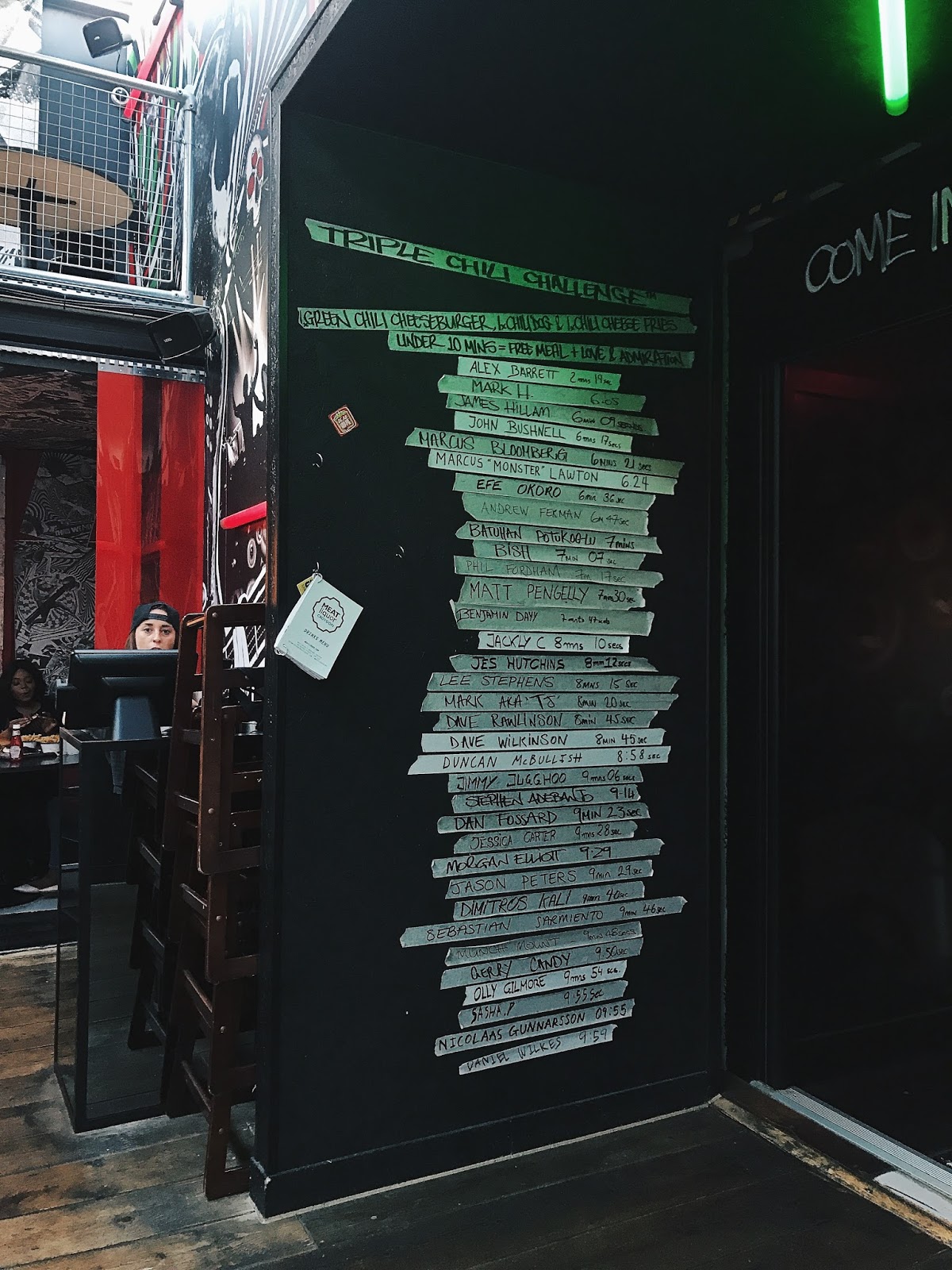 To begin our venture into the world of MEATliquor, we opted for a few cocktails off the pretty adventurous drink’s menu. There were many cocktails I’d never heard of before, with experimental combos and ingredients – something that ticks all of my boxes. There were page, after page, after page, of cocktail options, followed by wines, beers, ciders, and shots n’ bombs – if that’s ya thing.

My boyfriend opted for the Greek Church (£9.00) which had notes of fig, honey, and lemon – yum! Finished with some type of Greek spirit, this one made it into the memory books. It was really different and had just the twist to wake up your tastebuds compared to the usual cocktail ingredients like strawberry or elderflower. Obviously I went for Cock and Balls (£8.50) for the sake of it’s bloody hilarious name (honestly, try ordering this with a straight face) however, sadly, it left much to be desired. I had instant “cocktail regret” and wish I ordered something a bit more adventurous as this cocktail was nothing special on the palette.

ROUND TWO. Of course we ordered more than one cocktail (but shh it was a week night) and this time I went all in. I grabbed the Cherry Pick (£10.00) which was bursting with sweet n’ sour cherry taste and topped off with craft cider! I even got the rest of the can to finish off which was a major plus. On the other hand, my boyfriend was feeling super adventurous and nabbed the Game Over (£10.50) – warning, this one is actually limited to two per person, and yes it does say this on the menu. The Game Over actually has vodka, gin, rum, tequila…. and absinthe in it. Topped with tropical red bull, this strong a$$ cocktail really put in a punch but was also really pleasant to drink – deceiving! 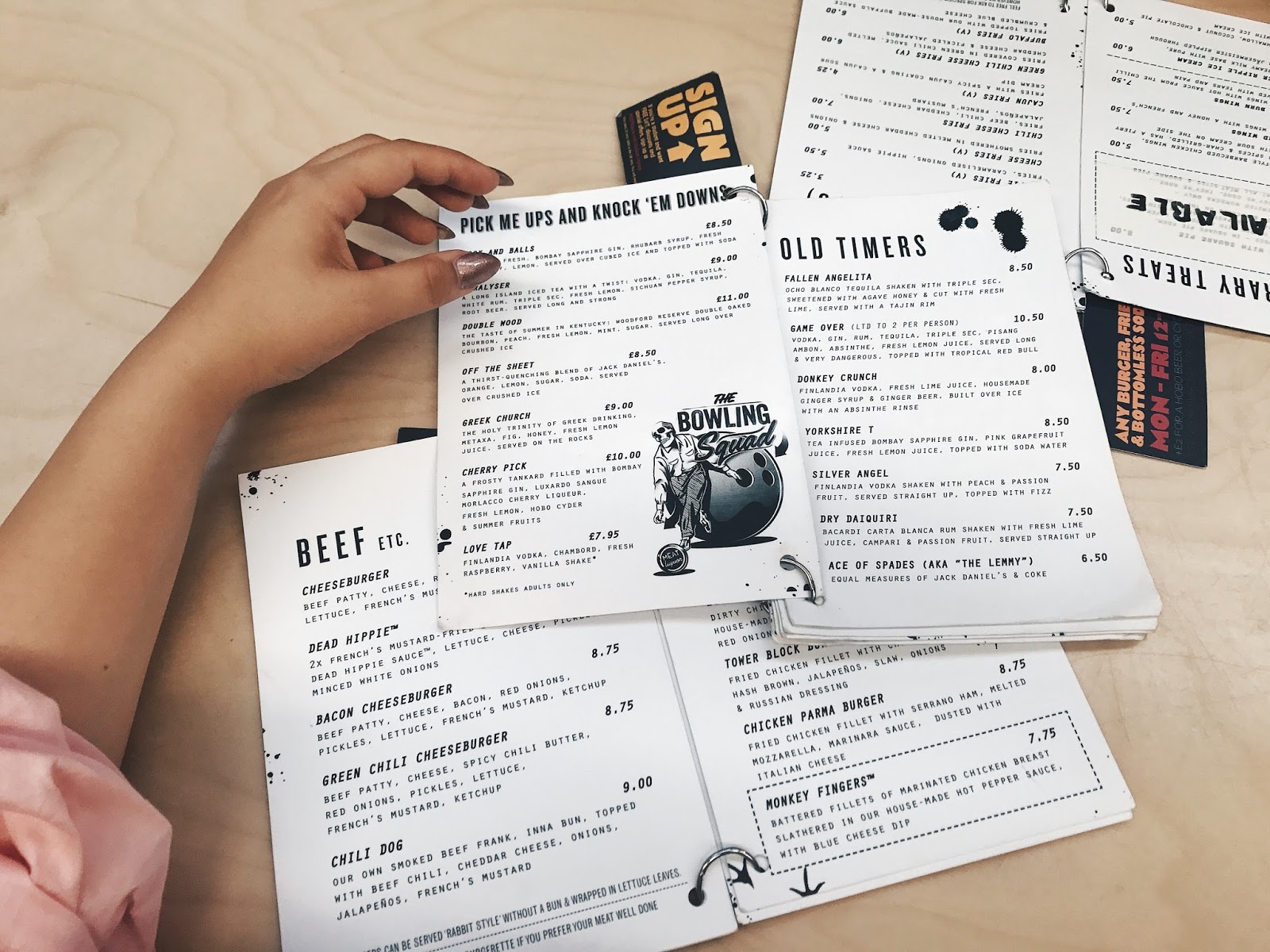 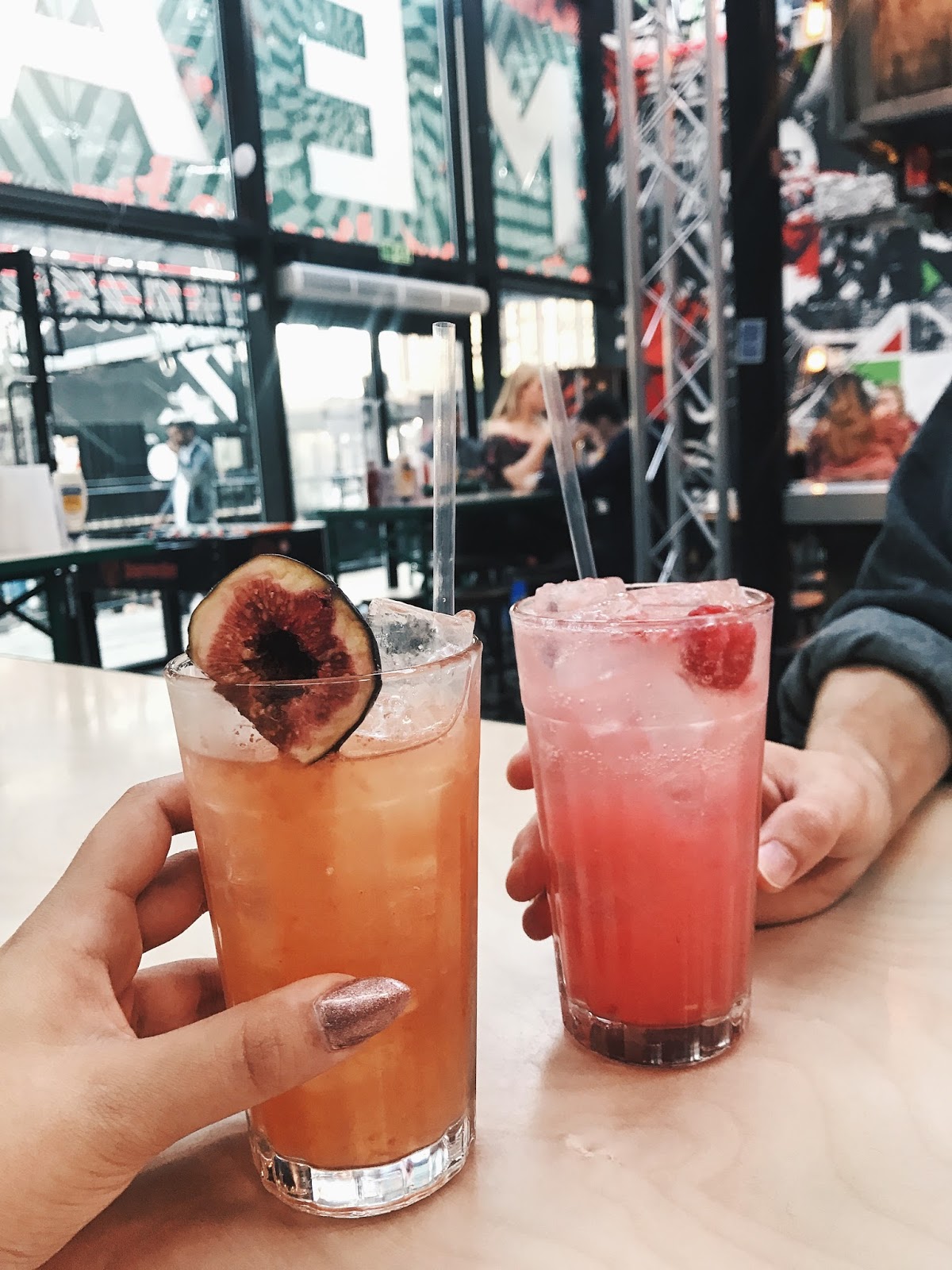 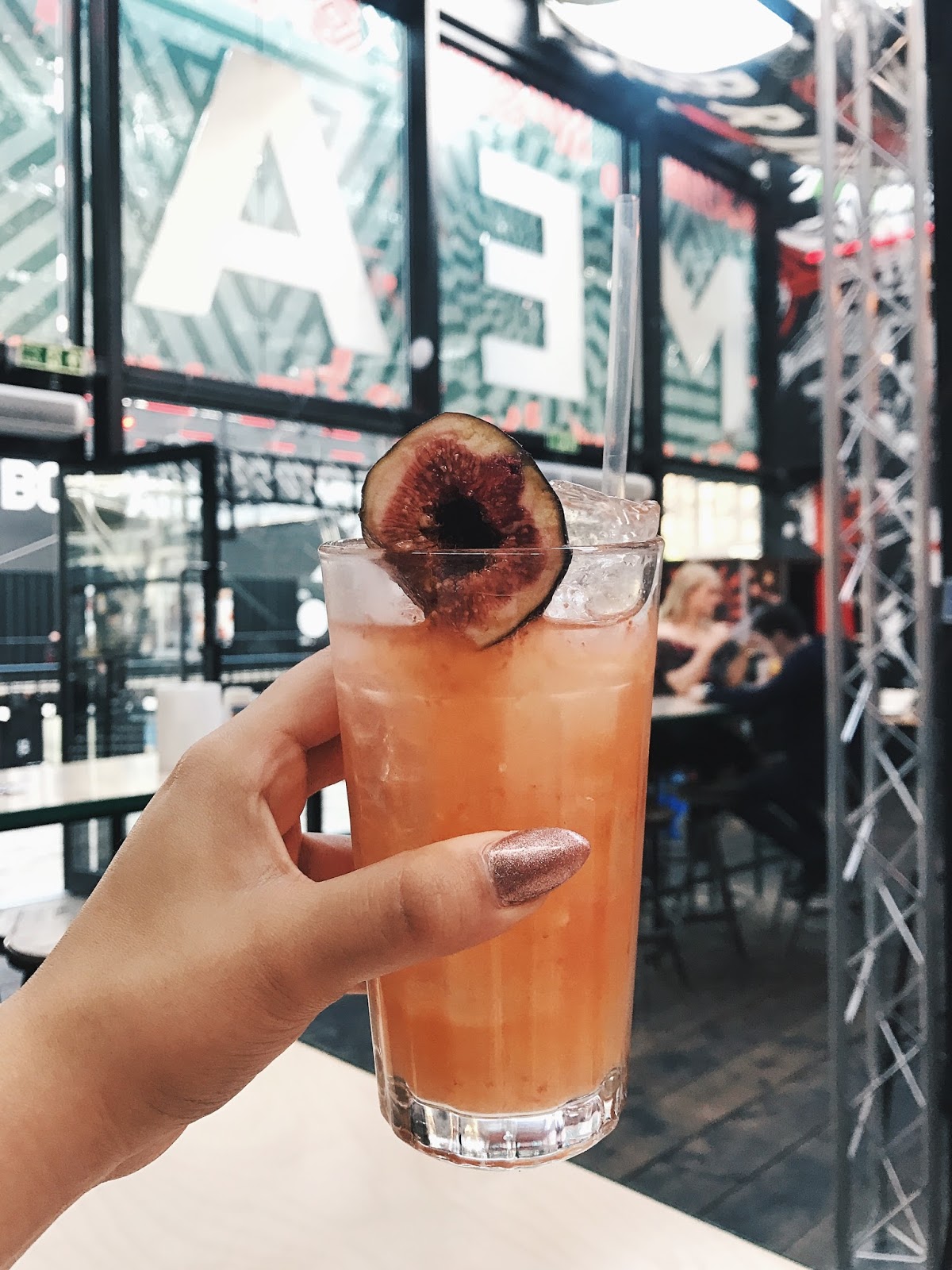 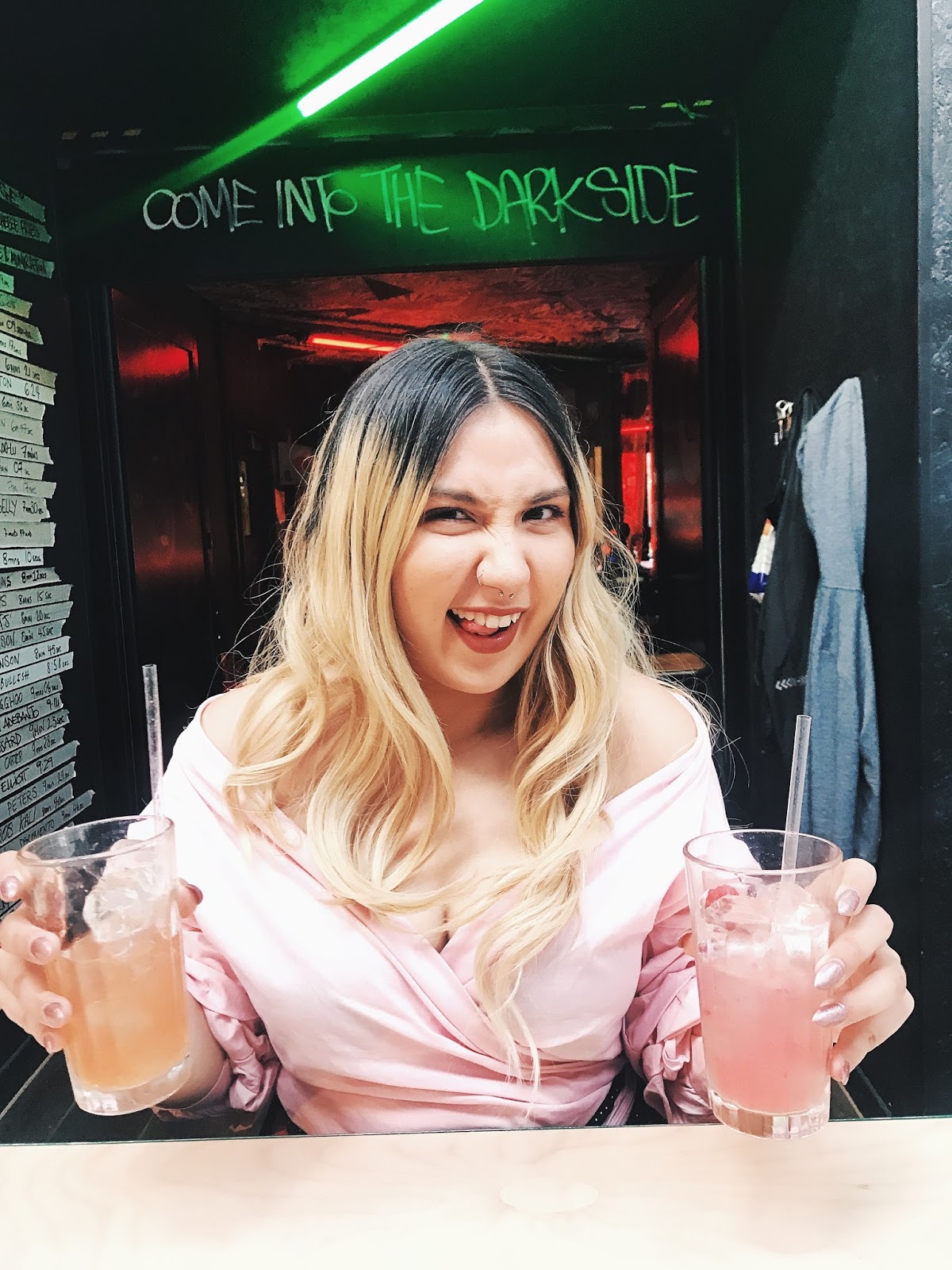 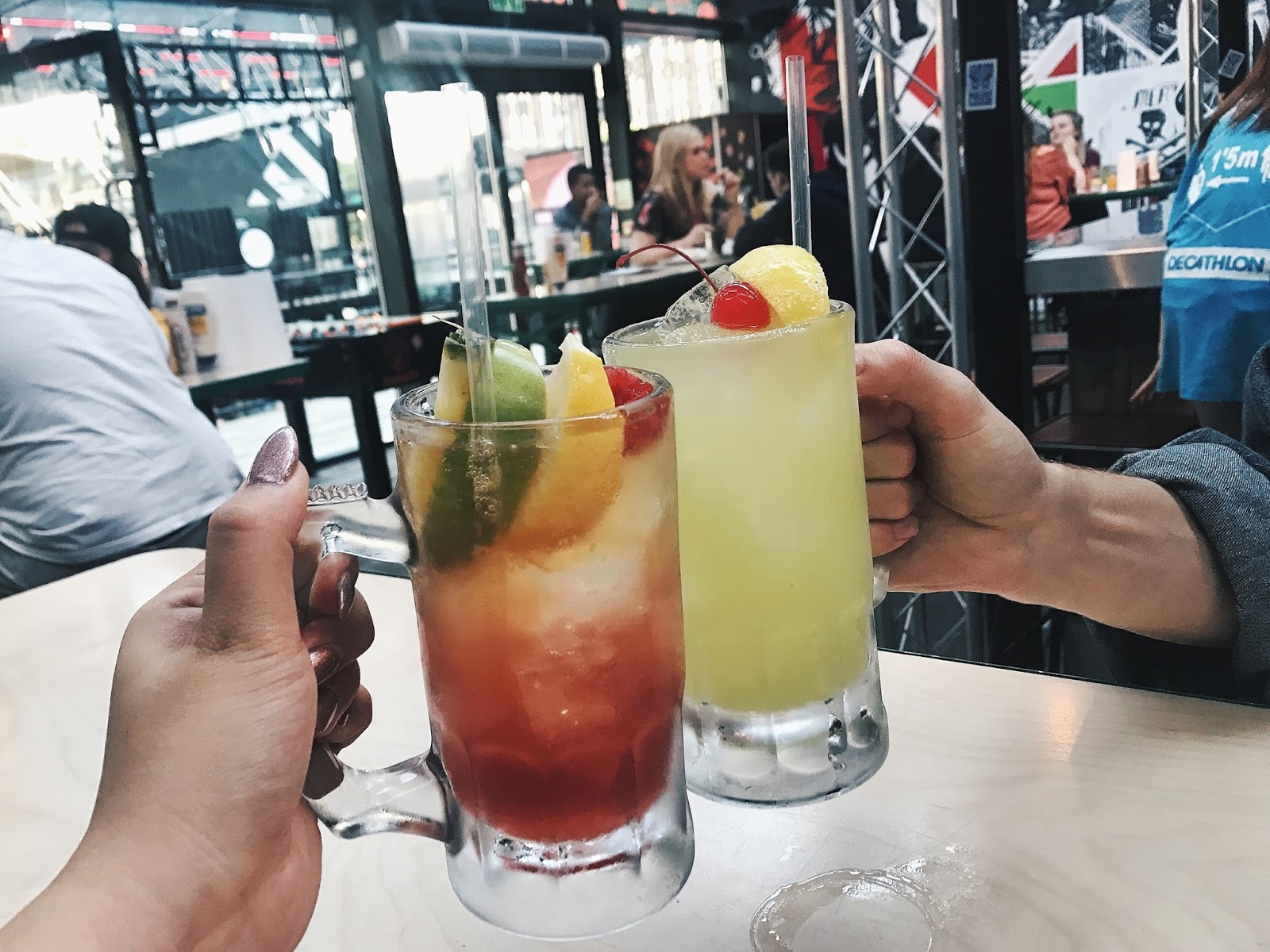 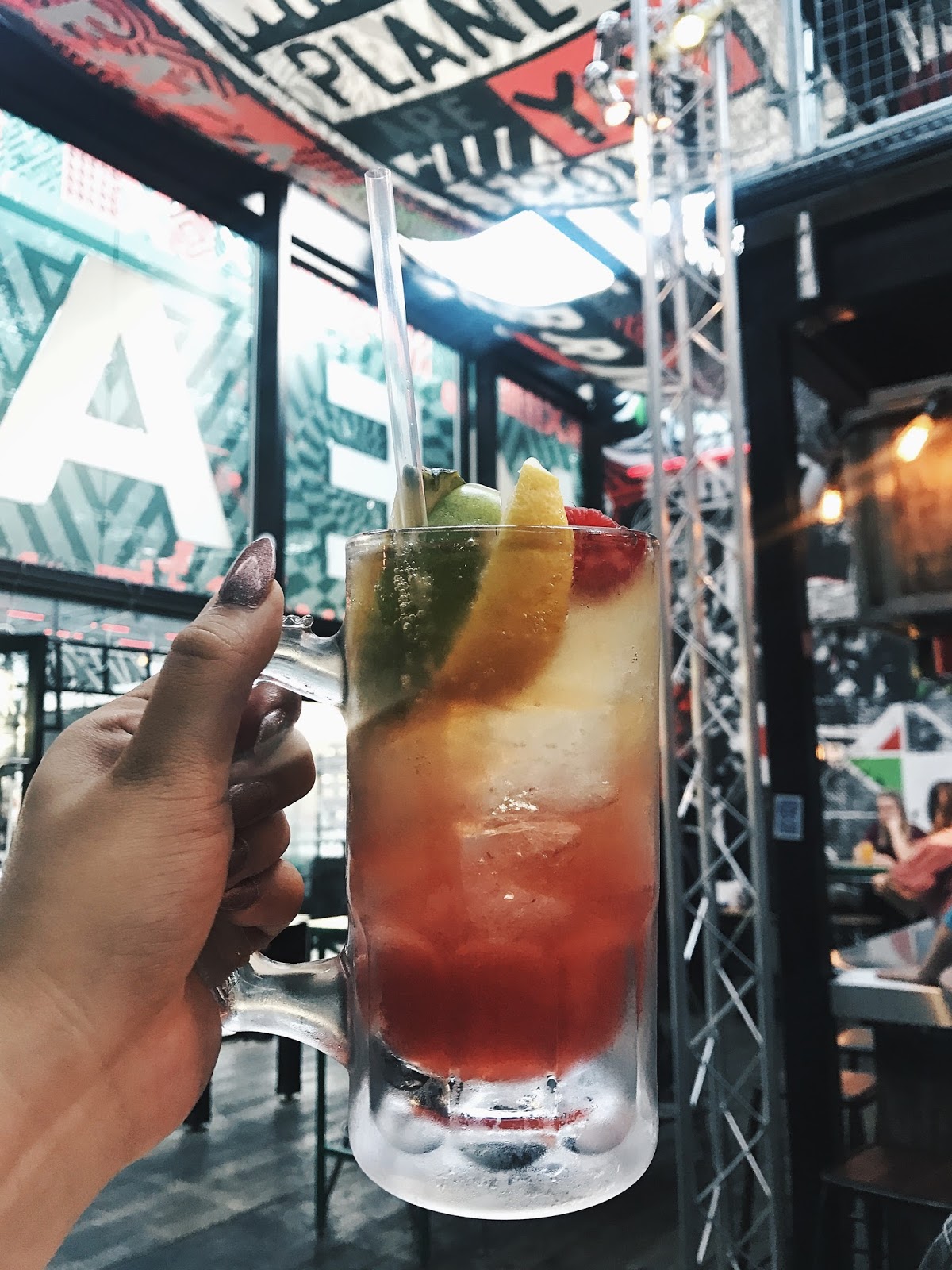 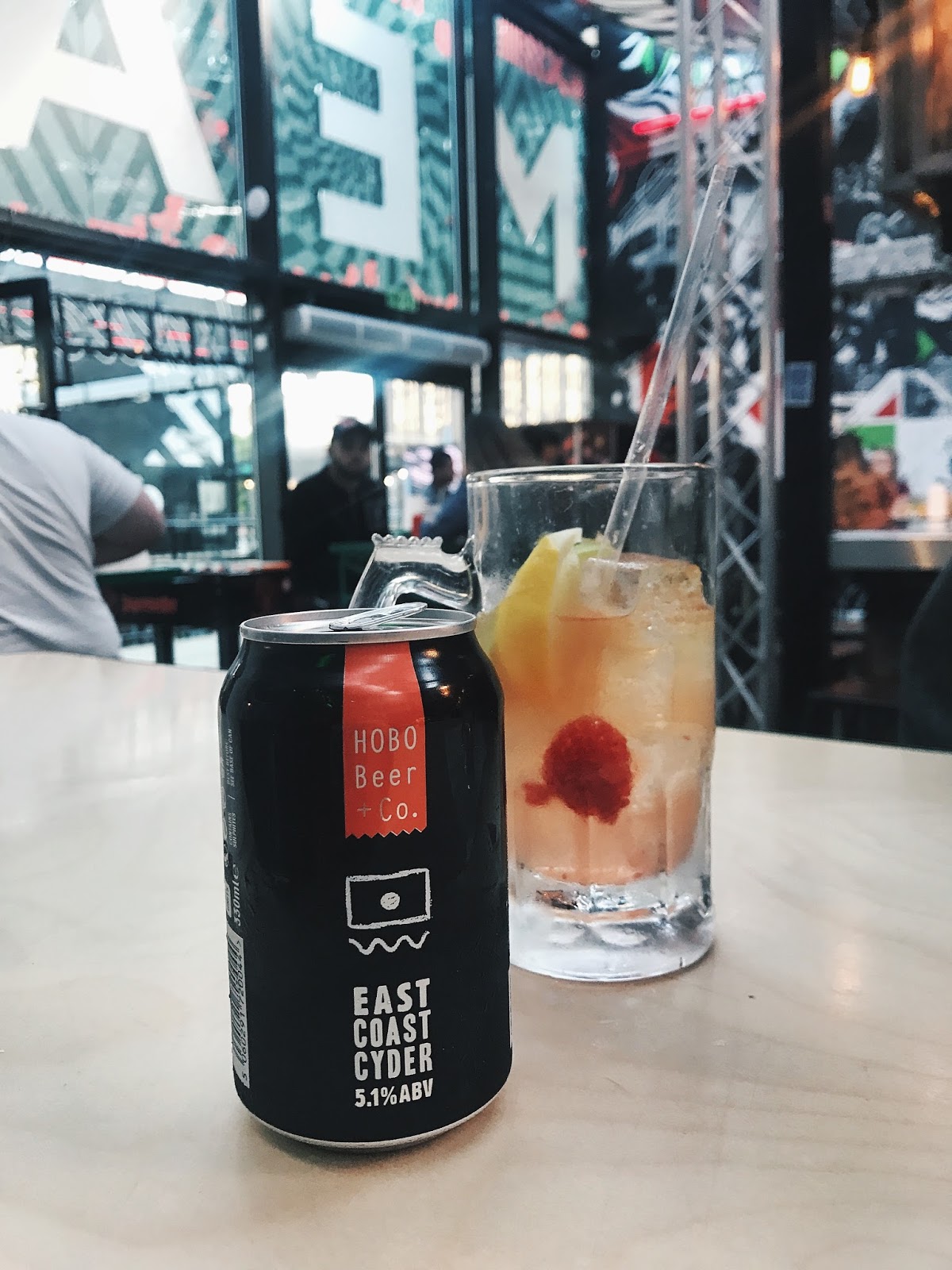 Because both of us are big on sharing and grazing, we went for just a burger each and sides to share sorta deal so we could enjoy a large spectrum of the food on offer at MEATliquor. The Dirty Chicken Cheeseburger (£8.75) was calling me from the get go, filled with deep fried chicken and topped with cheese? Yes please, lots of it. Although this burger was well sized and really tasty, I couldn’t help thinking that it could have been fried for longer… or something? Within minutes that lush fried-ness was soggy and a bit goo-ey in the midde of the burger, you know? But other than that, the taste was all there and it was up there with one of the best tasting chicken burgers I’d had. 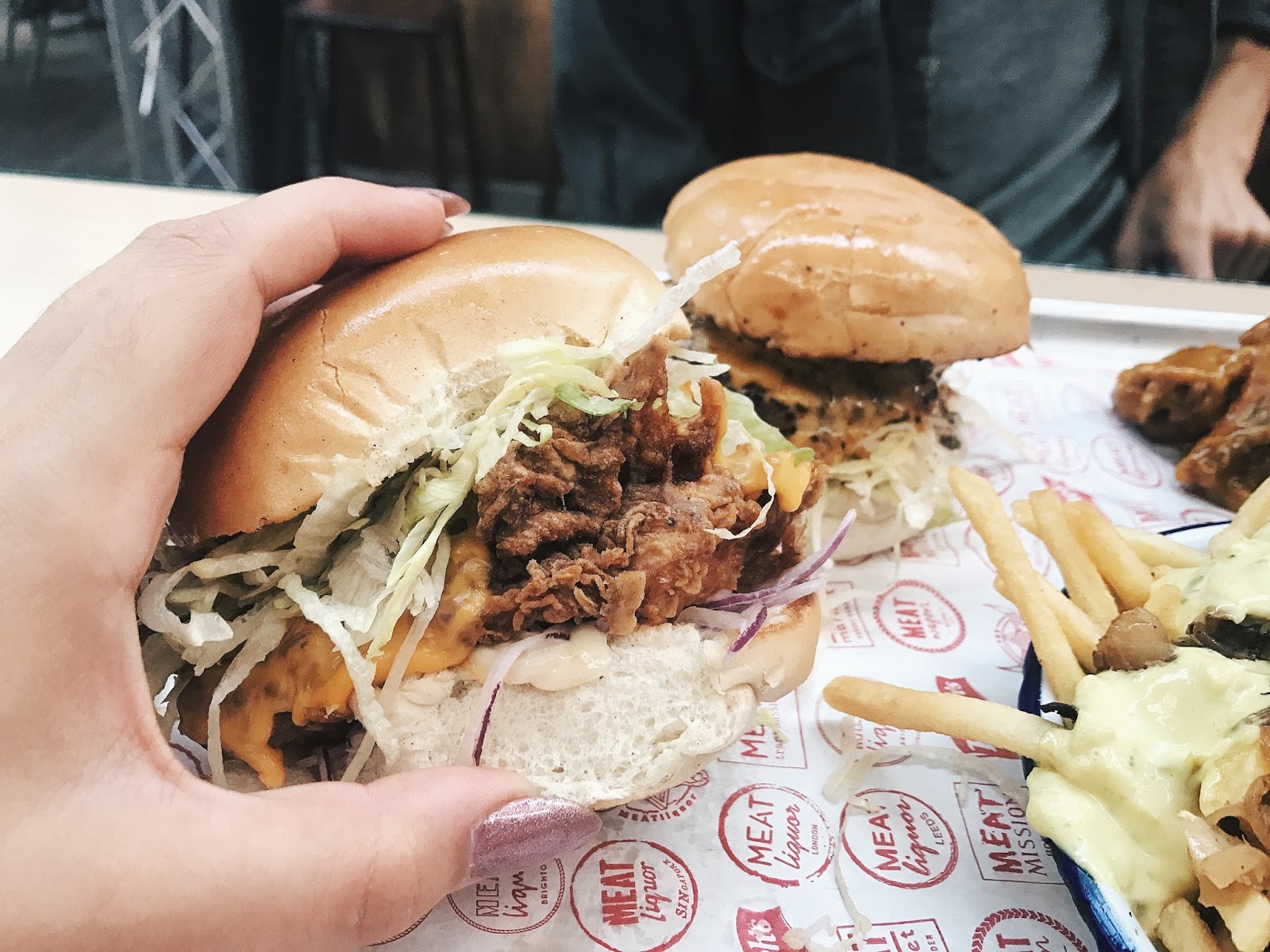 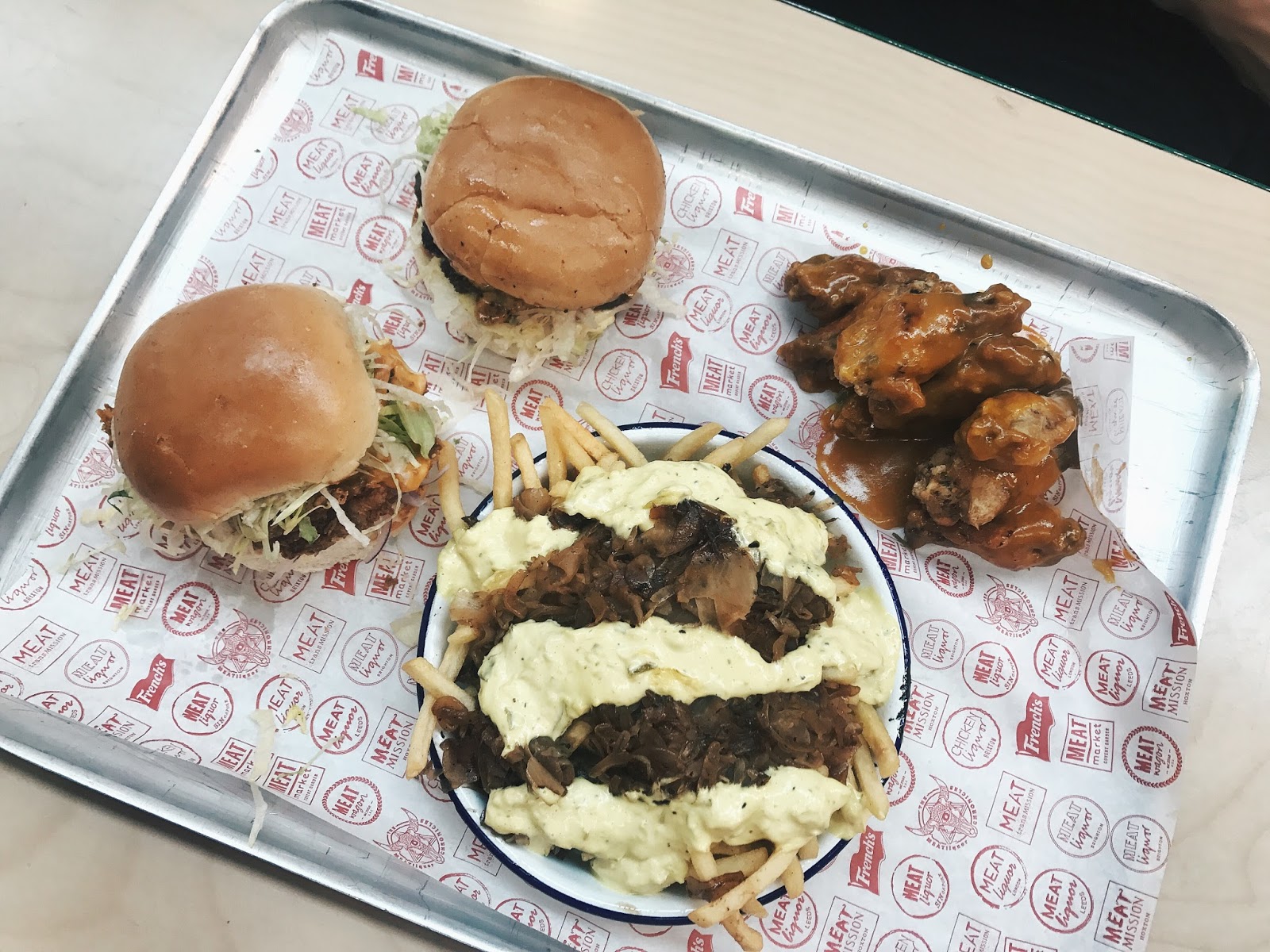 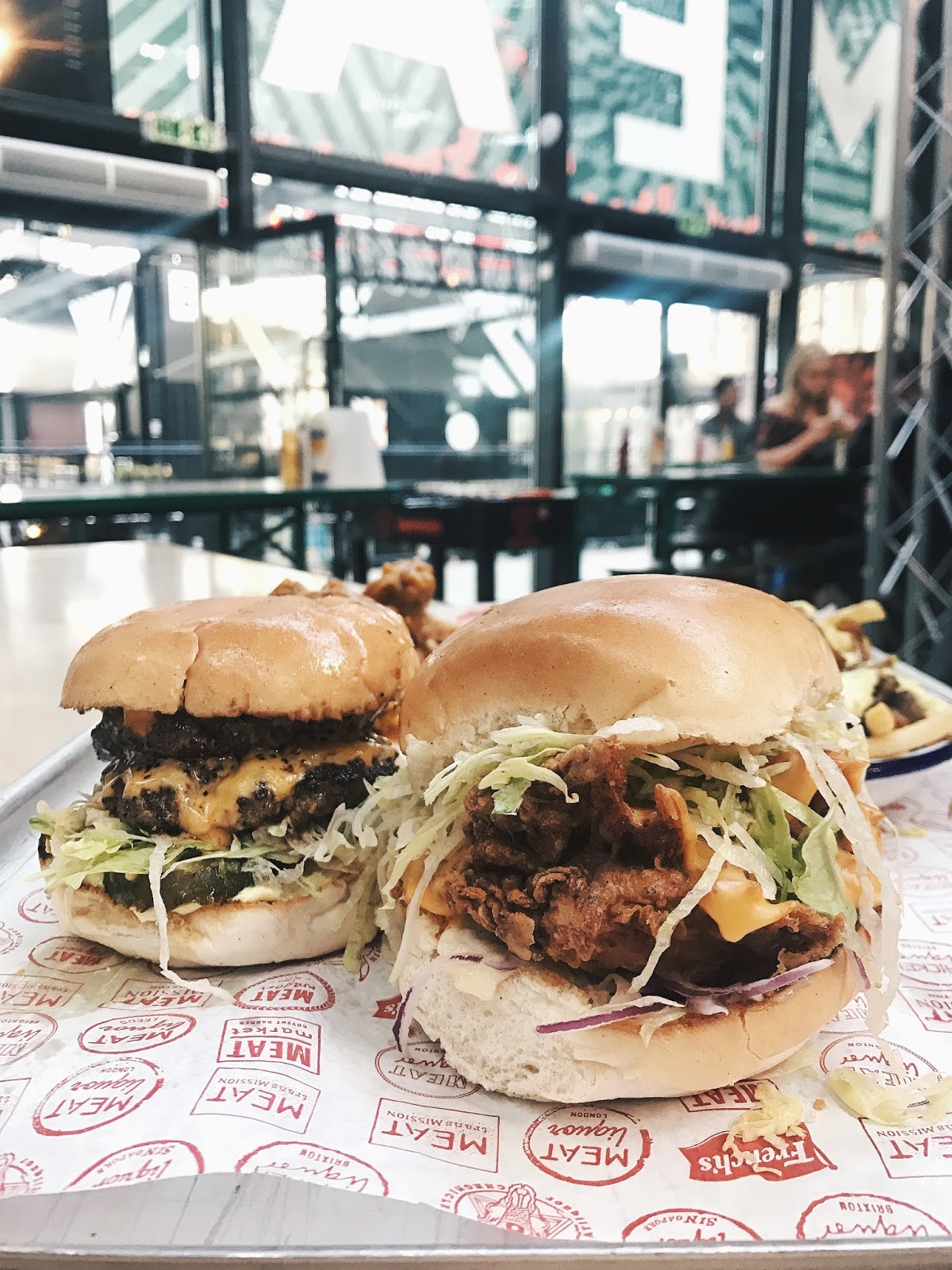 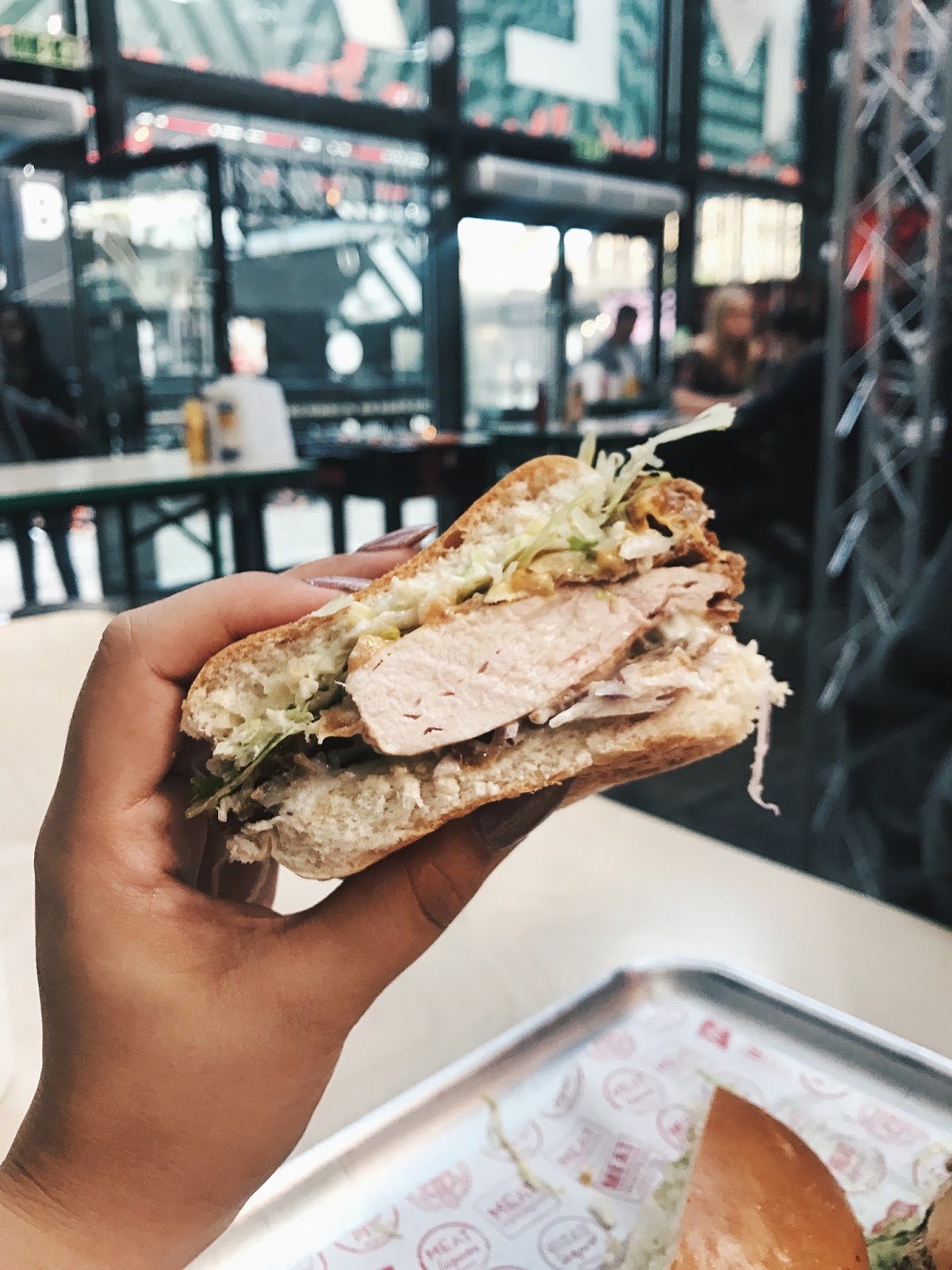 Alix, however, was feeling a little bit more on the meaty side and went for the classic beef burger topped with cheese n’ bacon – The Bacon Cheeseburger (£8.75). Side note – We actually ended up going halves because we wanted to try eachothers burgers so much. The Bacon Cheeseburger was delish and cooked perfectly medium (you can also ask for well done, don’t be shy!) and the toppings of bacon and cheese melted wonderfully into the smokey burger patties. This one was a tad bit messy, but that’s all part of the fun right? 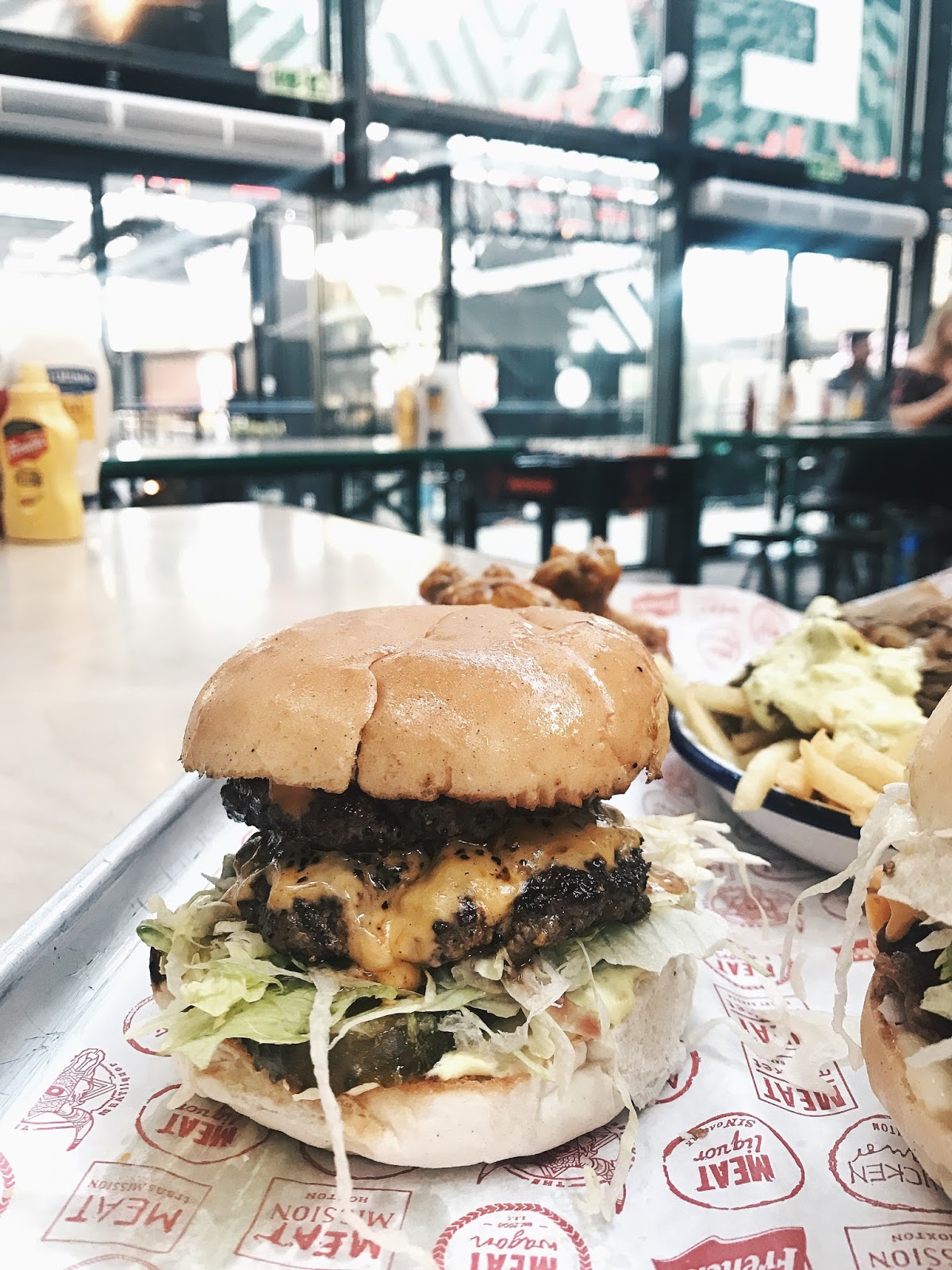 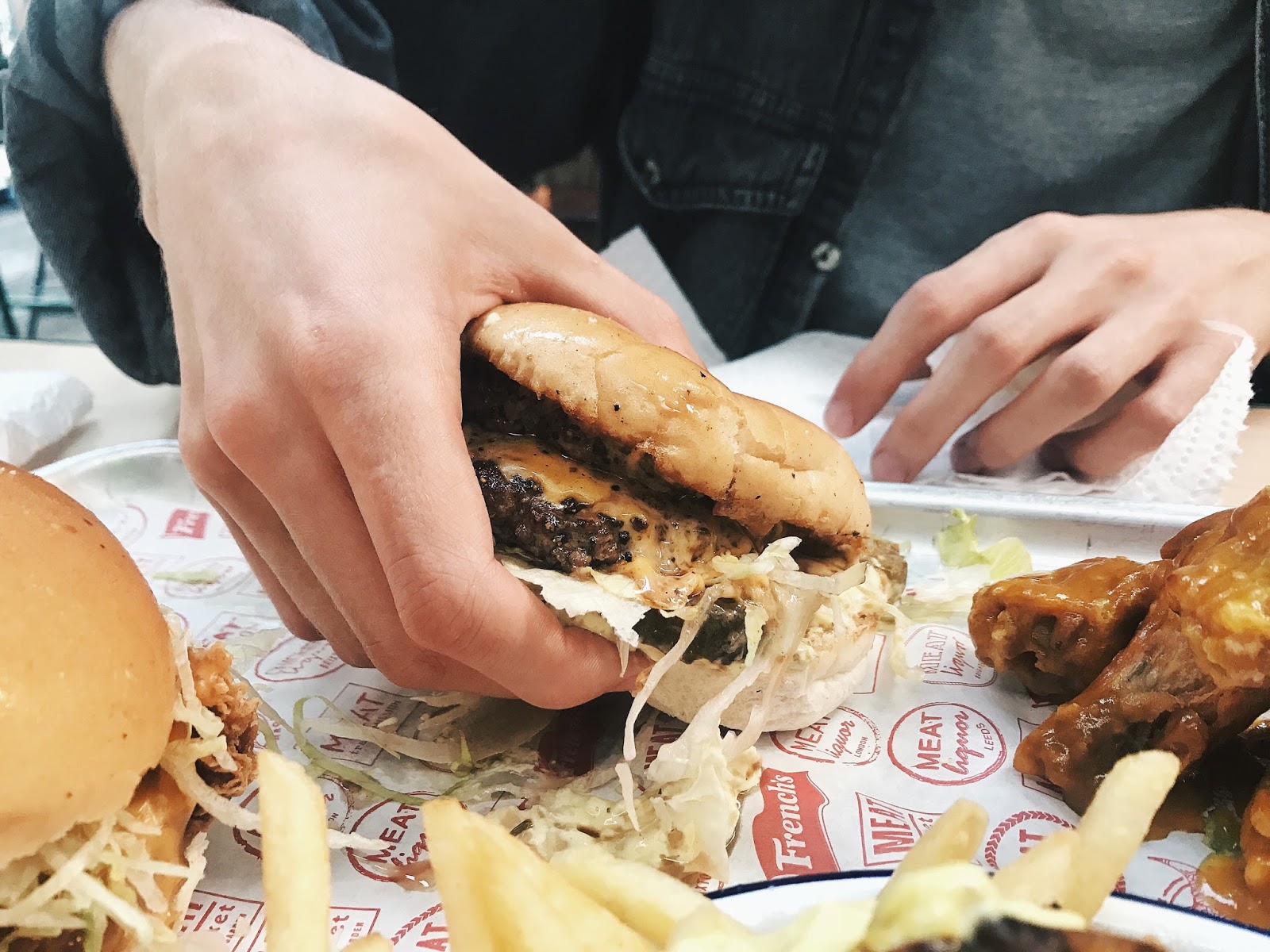 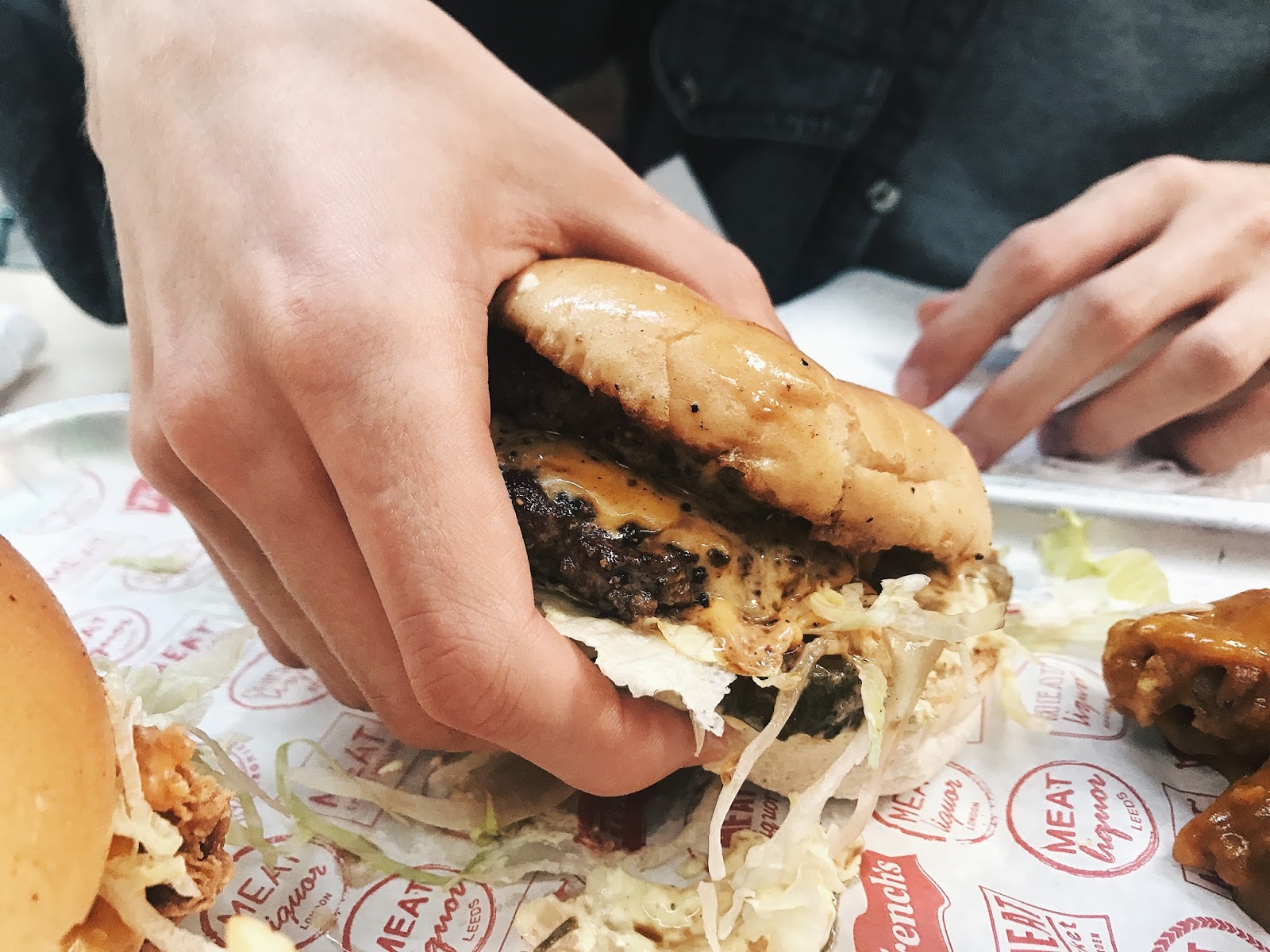 Side-wise we chose the Hippie Fries (£5.50) and the Honey Mustard Wings (£7.50). Now, lemme start with the wings because BOY I am converted. Before these I wasn’t really a wing fan as I always thought of them as a bit messy and a bit dry, but these were succulent, juicy, and the mustard sauce is sublime. I would note that they are very rich in flavour (particularly mustard) so I wouldn’t have been able to eat a whole portion by myself, but there were lush as a sharer! Also, the portion of Hippie Fries was HUGE. Even with the best efforts of both of us combined and we couldn’t finish these bad boys off so I wouldn’t order a whole side for yourself unless you really are hank marvin’. 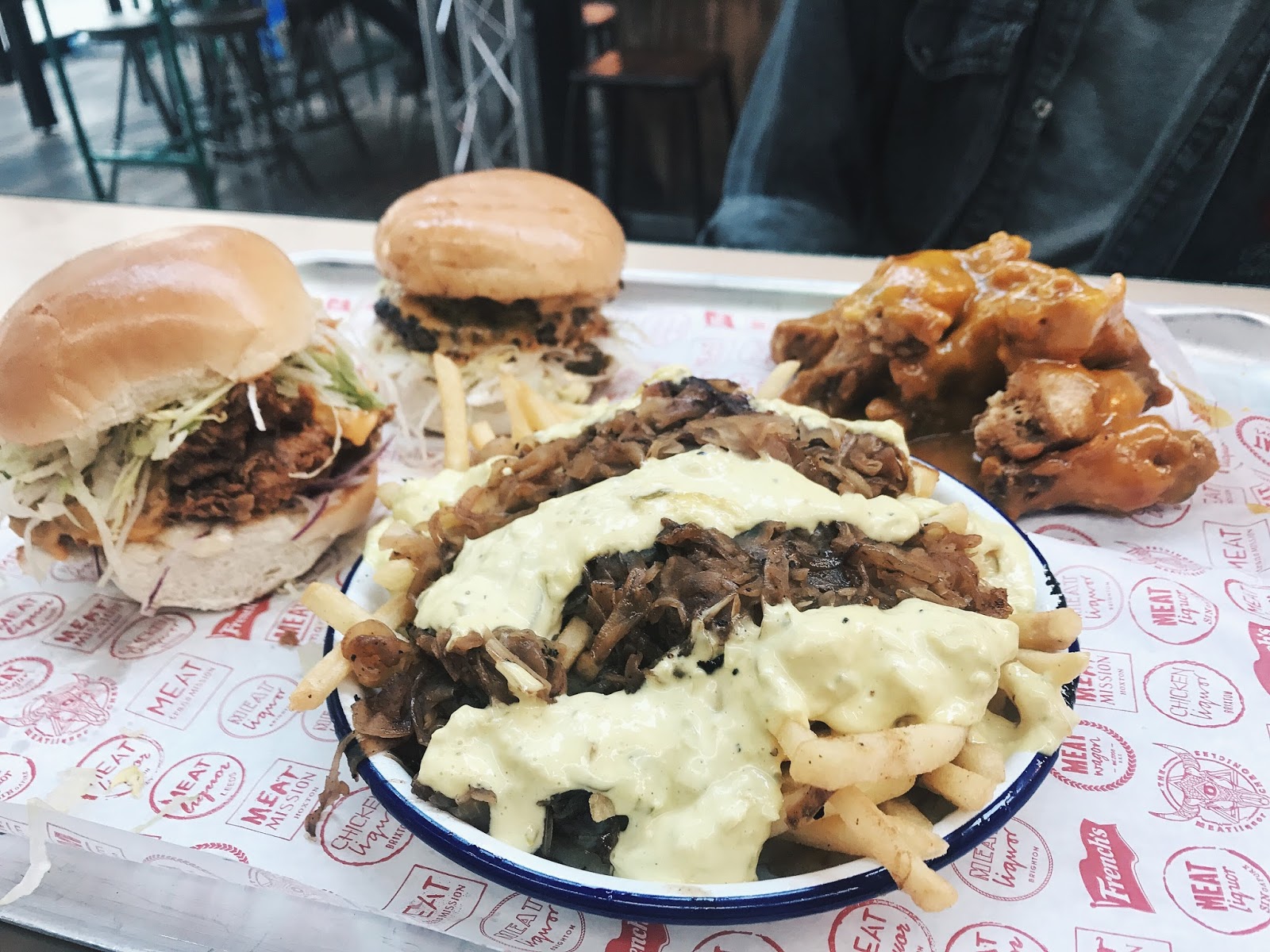 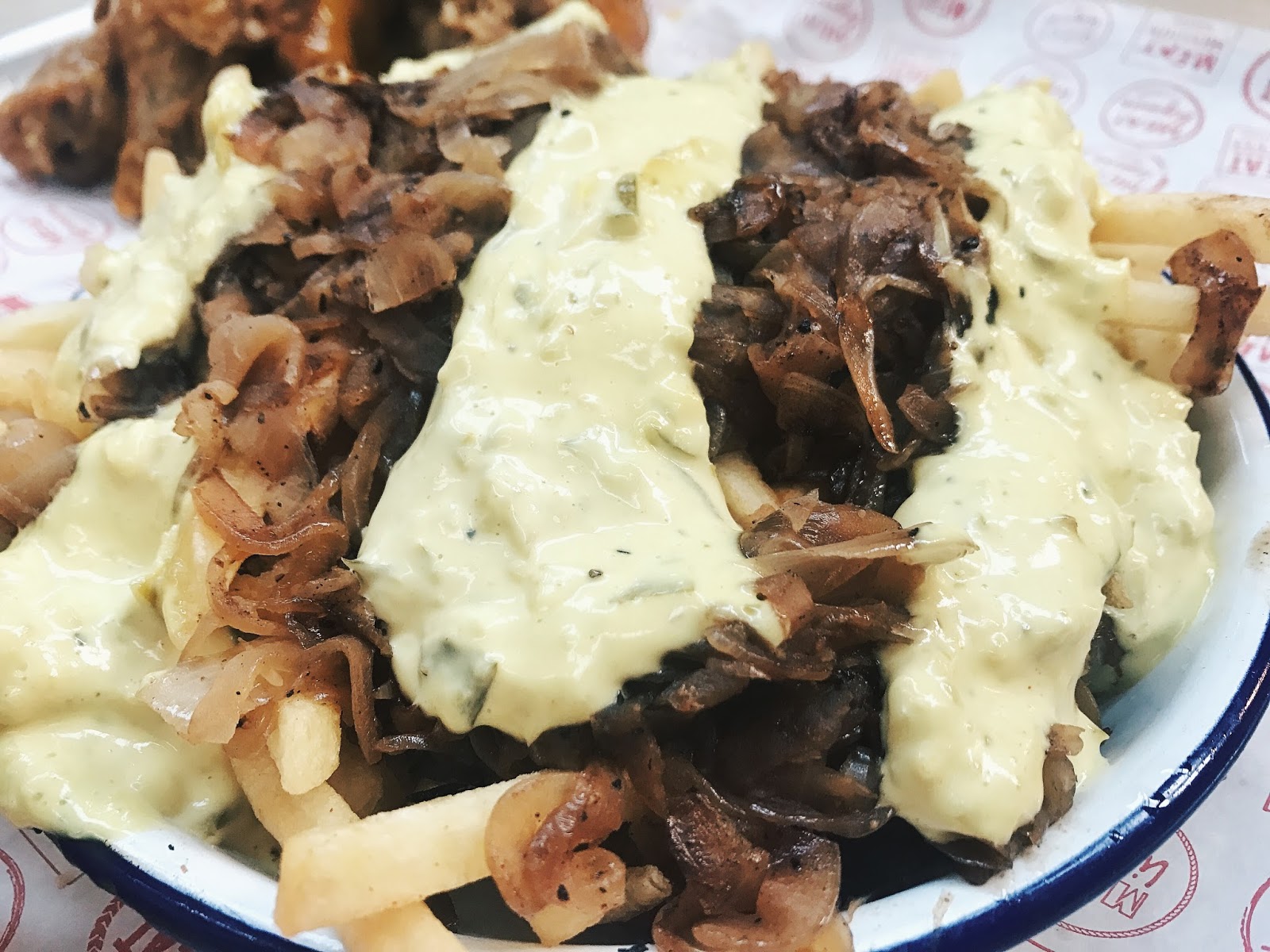 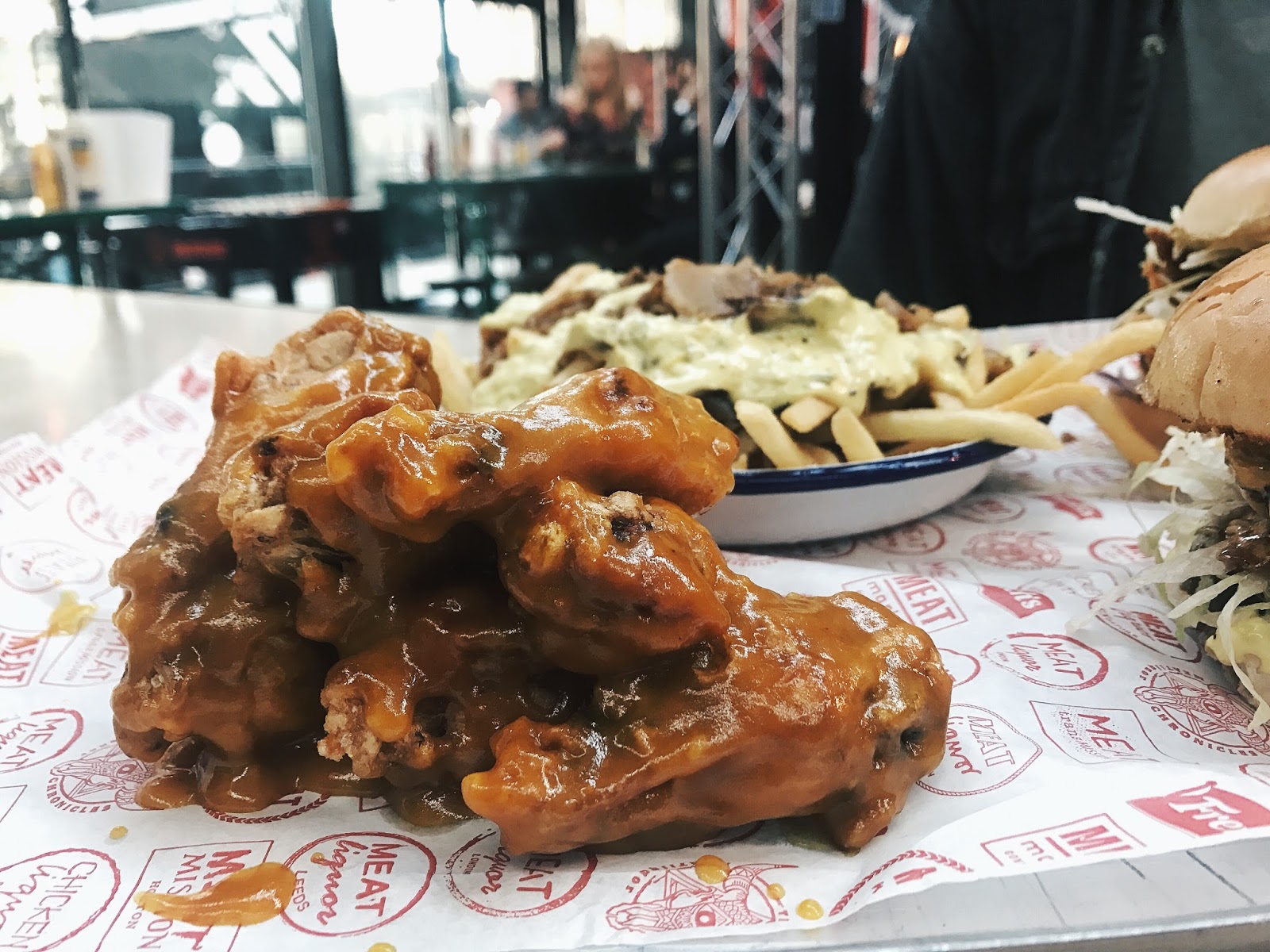 The service was also A* and the manager was really funny and made us feel super comfortable during our visit. All in all, a wonderfully meaty experience at MEATliquor has me converted (and lusting after) more honey mustard chicken wings and a pop of cherry cocktail very soon. I’m even considering dragging my boyfriend back down to Croydon, which is a bit of a trek from my base in North London, but it’s just so worth it for those wings guys! Hope to eat you again soon, MEATliquor Croydon!

*I was gifted this experience, however all thoughts and opinions are my own*