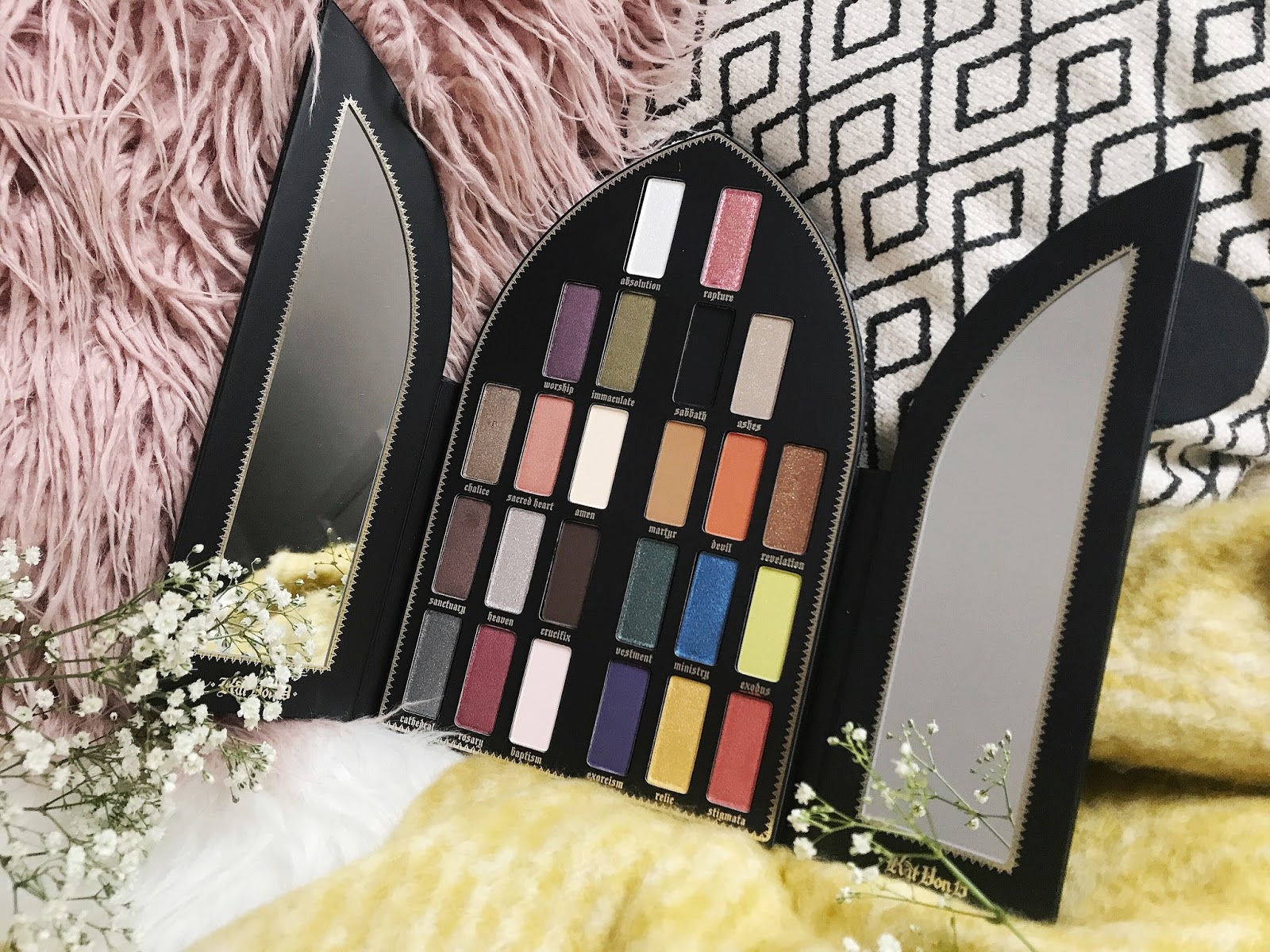 Retailing at £52.00, this limited edition Holiday 2017 palette is one of the most expensive, yet most coveted on the market. So, what’s all the hype really about? Are the shades all that wearable, and is that butter formula really worth the £££?

Well ladies + gents, I managed to waste about 10 hours waiting for the Kat Von D Saint + Sinner Palette to launch a week or so ago – only to find out that the Debenhams online launch had been postponed until the next day. I was pretty pissed, and by this point I just wanted to get the bloody palette. The next morning I hopped on the Debenhams website at about 8.00am to find out that it launched way earlier in the morning (around 5/6am I believe) so I could grab a palette – Hallelujah! 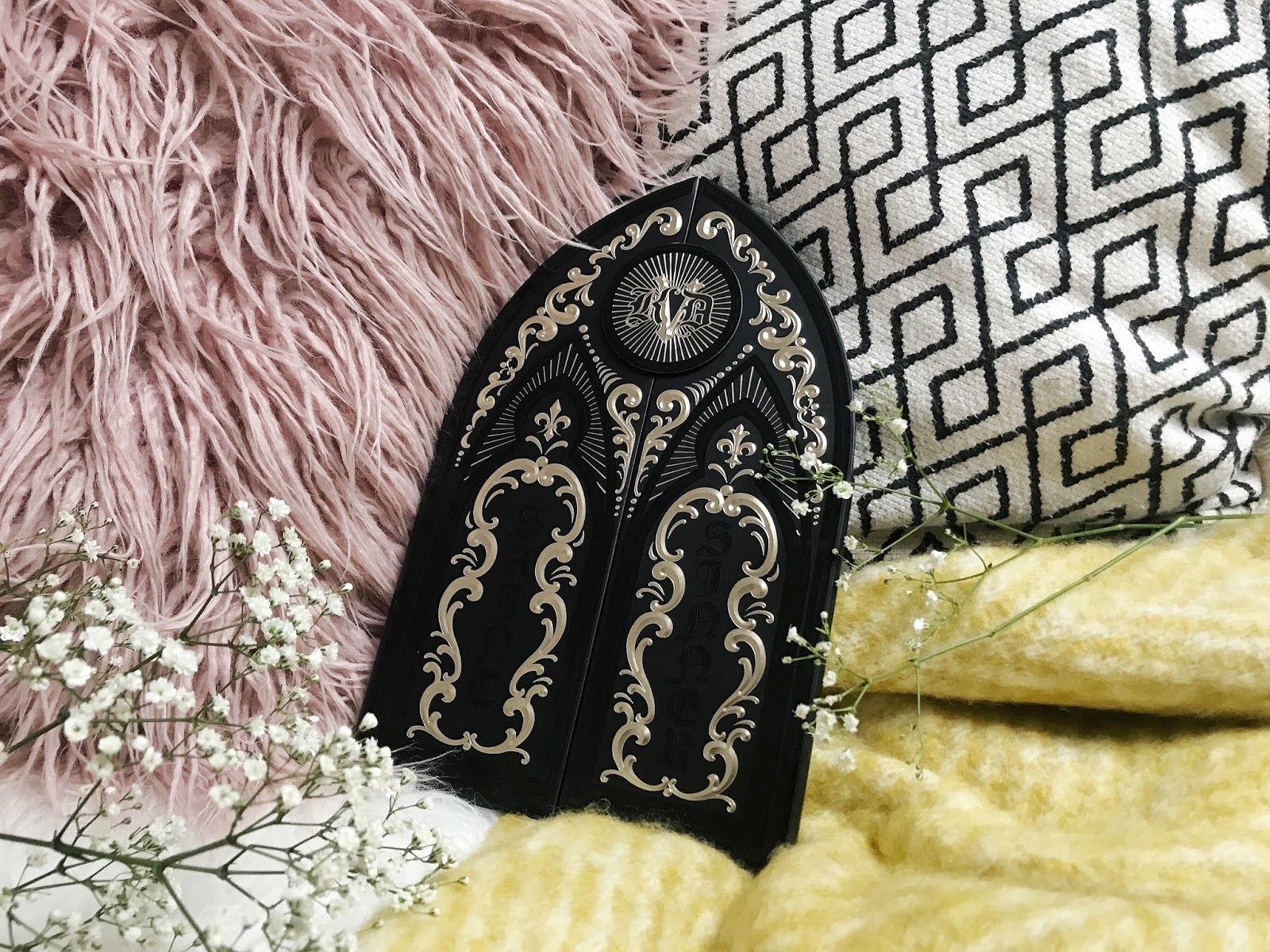 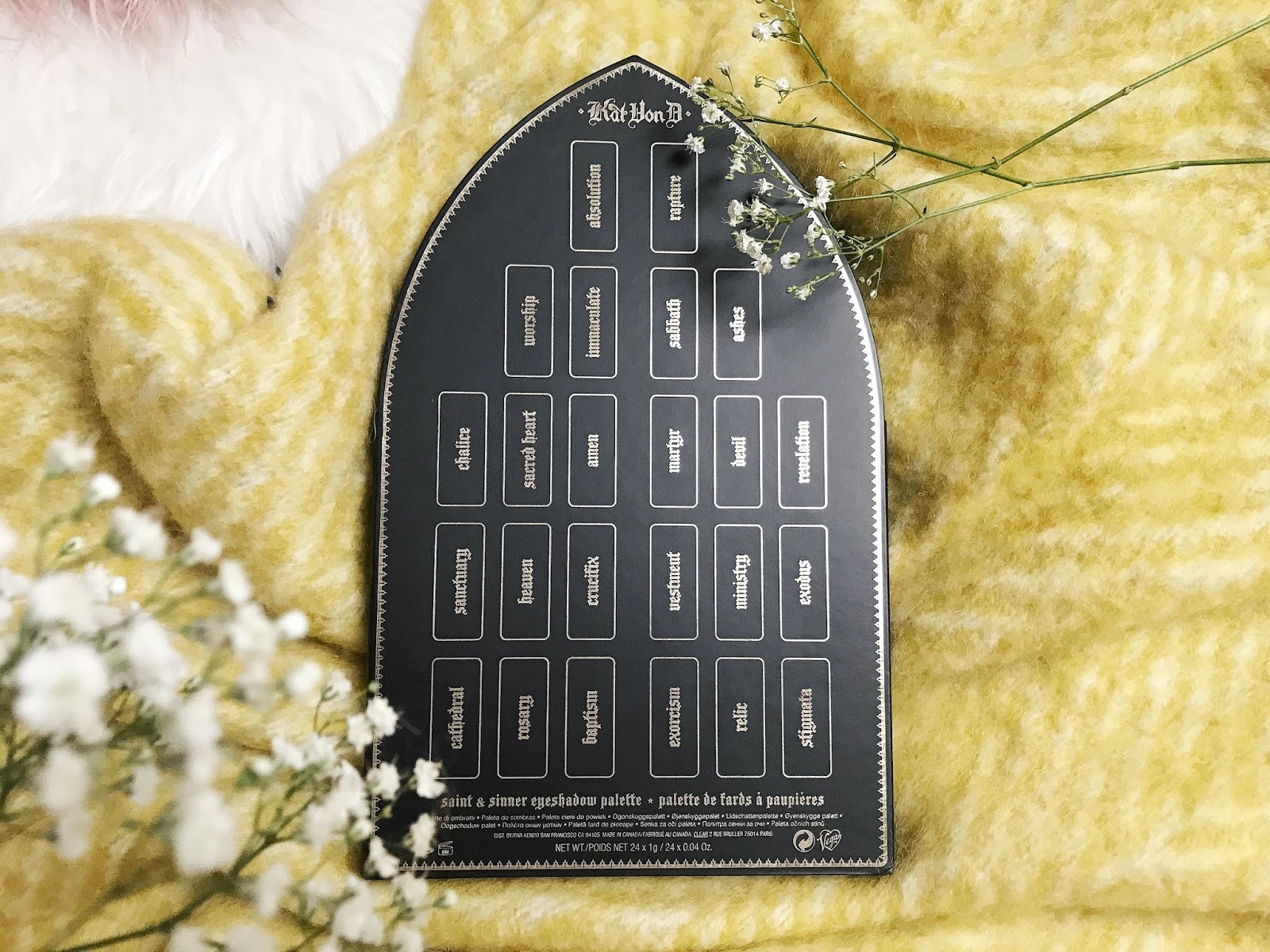 After learning a hard lesson about Debenhams delivery with my sweet peach palette, which almost smashed into a tiny million pieces upon arrival (fyi ~ they used only one layer of flimsy bubble wrap packaging and the delivery guy forced it through my letterbox, it hung by the corner of the box which stopped it smashing on the floor, phew), so this time I went for the Click & Collect option. It was ready to collect within two days, which is well fast IMO. 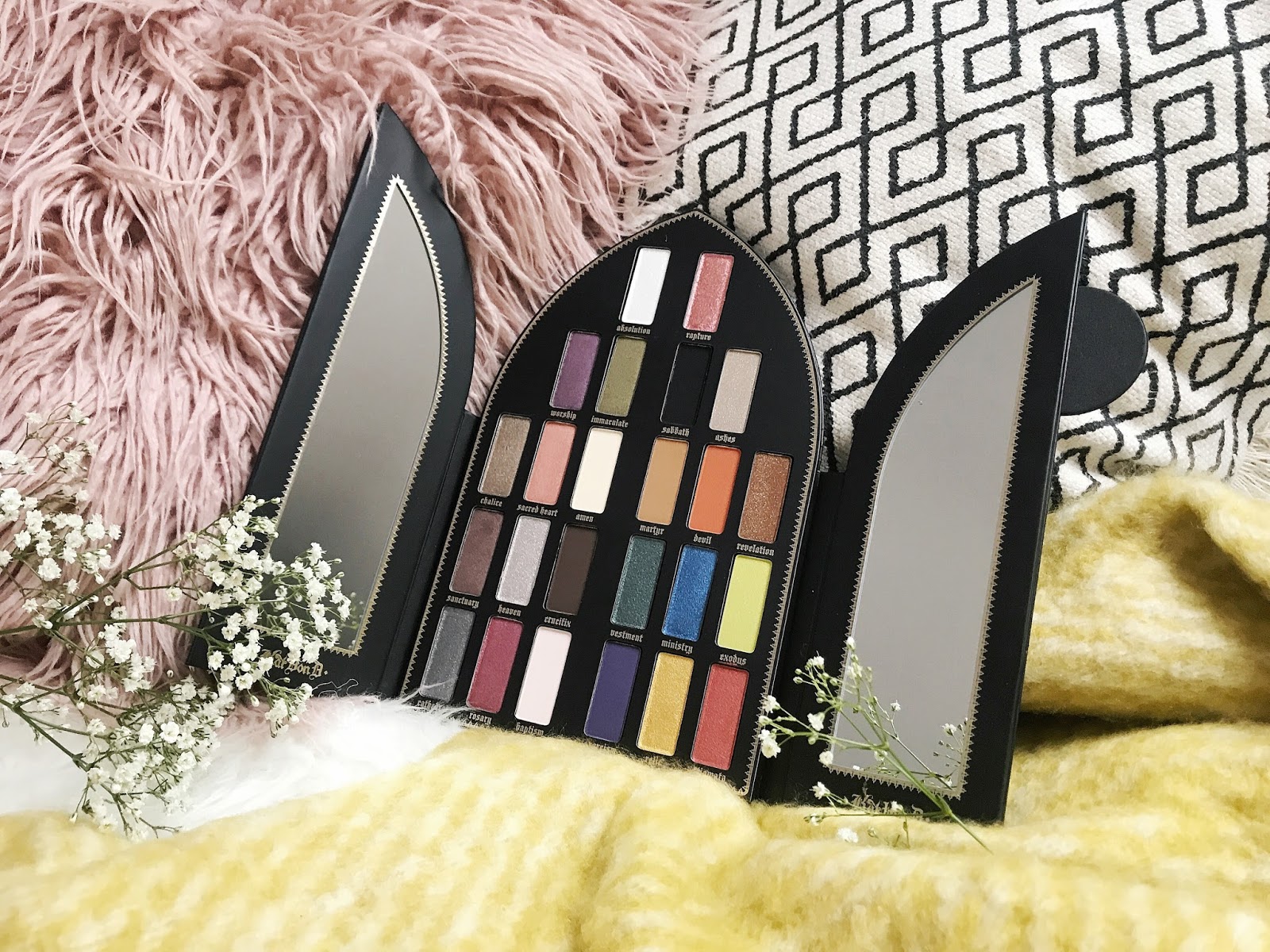 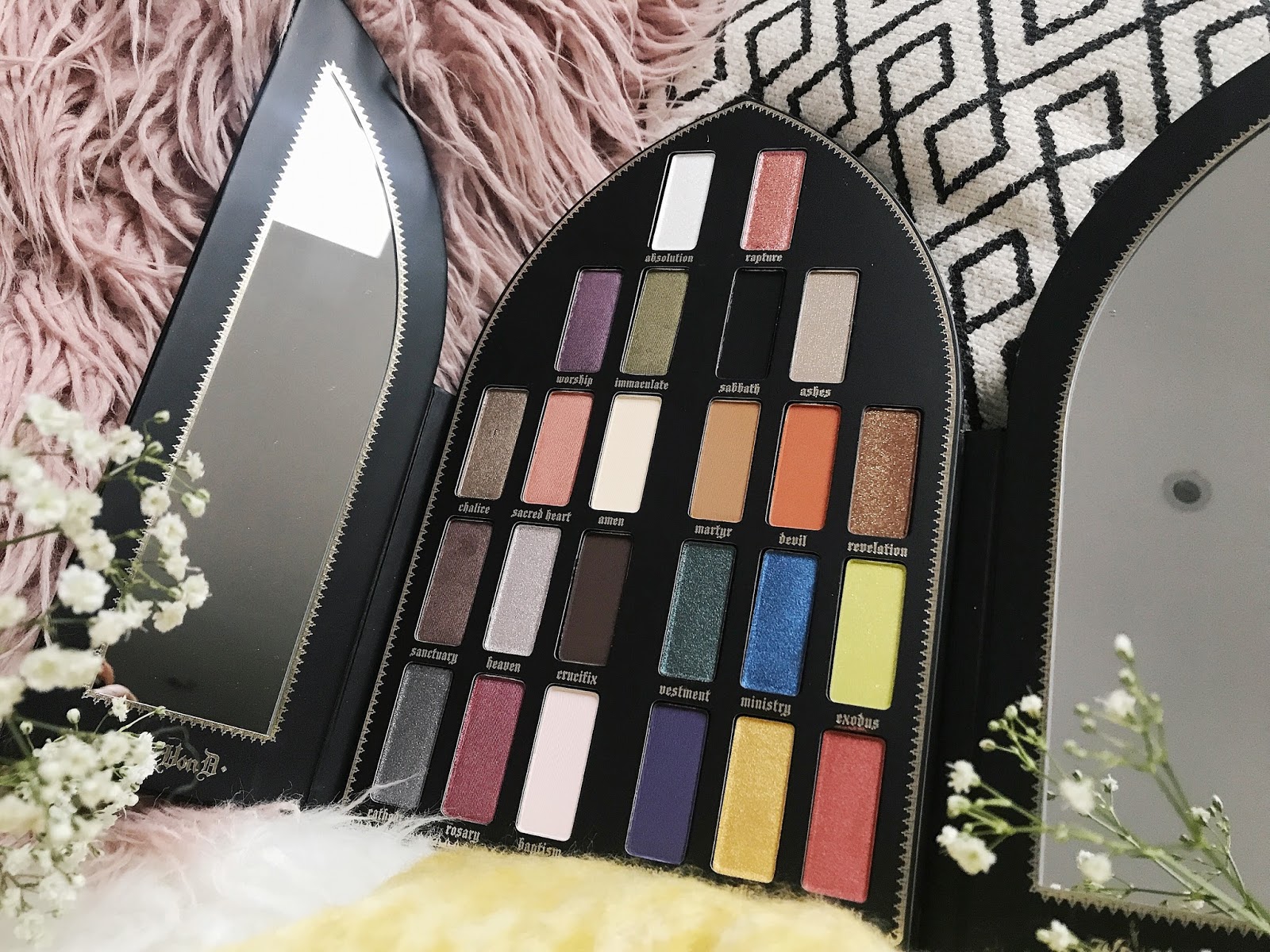 As soon as I got the Kat Von D Saint + Sinner Palette palette I had to share it’s beauty with you all on IG stories, and so many of you were sending me all the heart eye emojis – I totally agree. This palette is slightly on the larger side, but for the sheer amount of eyeshadow you get in here, it would have to be. As far as the packaging goes, I think that Kat nailed the design. It totally reads “Saint + Sinner” whilst the black and gold keeps it looking luxury. I do think that for £52.00 they could have made it a more sturdy plastic palette rather than a cardboard palette, but many of Kat’s palettes have been released in cardboard like the O.G. Shade + Light Contour. 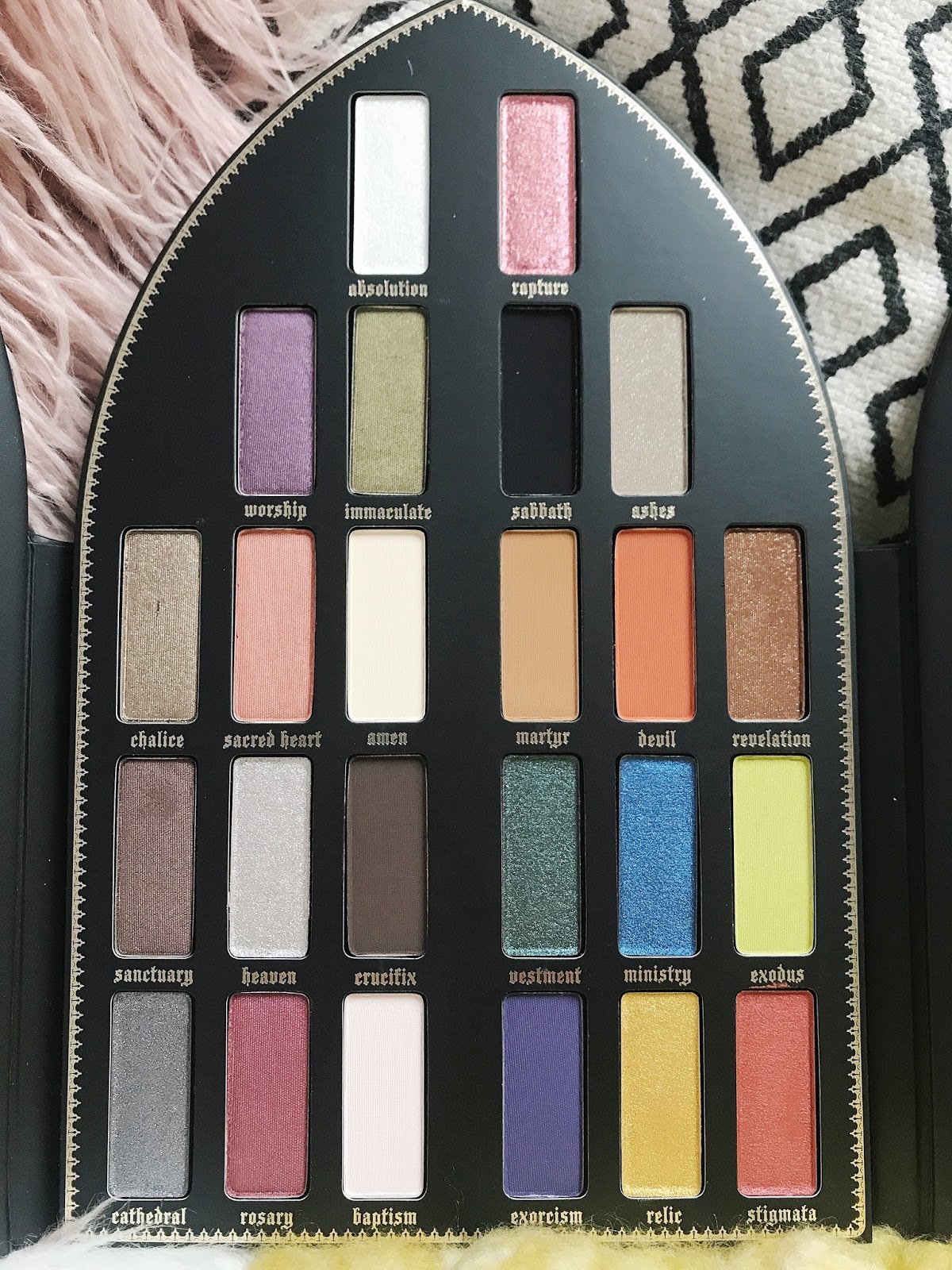 In terms of shade variety, I’m in hea-vennnnn. This palette has the sheer variety in texture, finish, and colour that I’ve been searching a long time for. There are three different finishes, including Kat Von D’s famous glitter formula – which fyi, are the top two shades Absolution and Rapture. You really do need a glitter glue to get these to stick to your eyelid, and a primer alone wont do it. I still haven’t found a wearable day-to-day way to wear these top two shades, I think they really are more for evening looks.

One thing that everyone gets concerned about with this palette is the layout of the shades, but if you really look at all the shades and match them up, you can make any look that you fancy. Plus, I’ve noticed that I’m getting more creative and brave when I’m using this palette and I’ve discovered some eye looks that I honestly never would have tried before getting this gem of a palette. 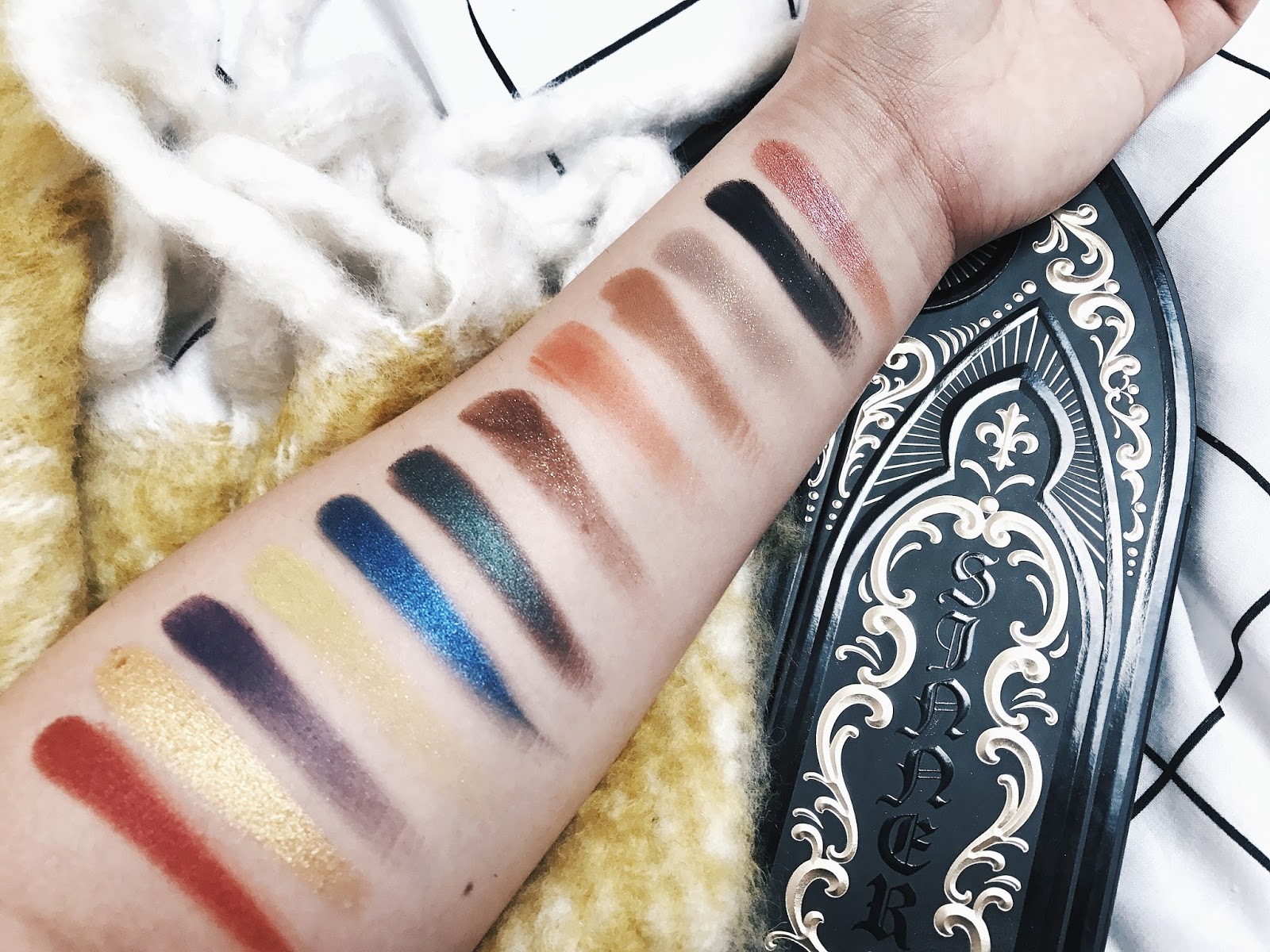 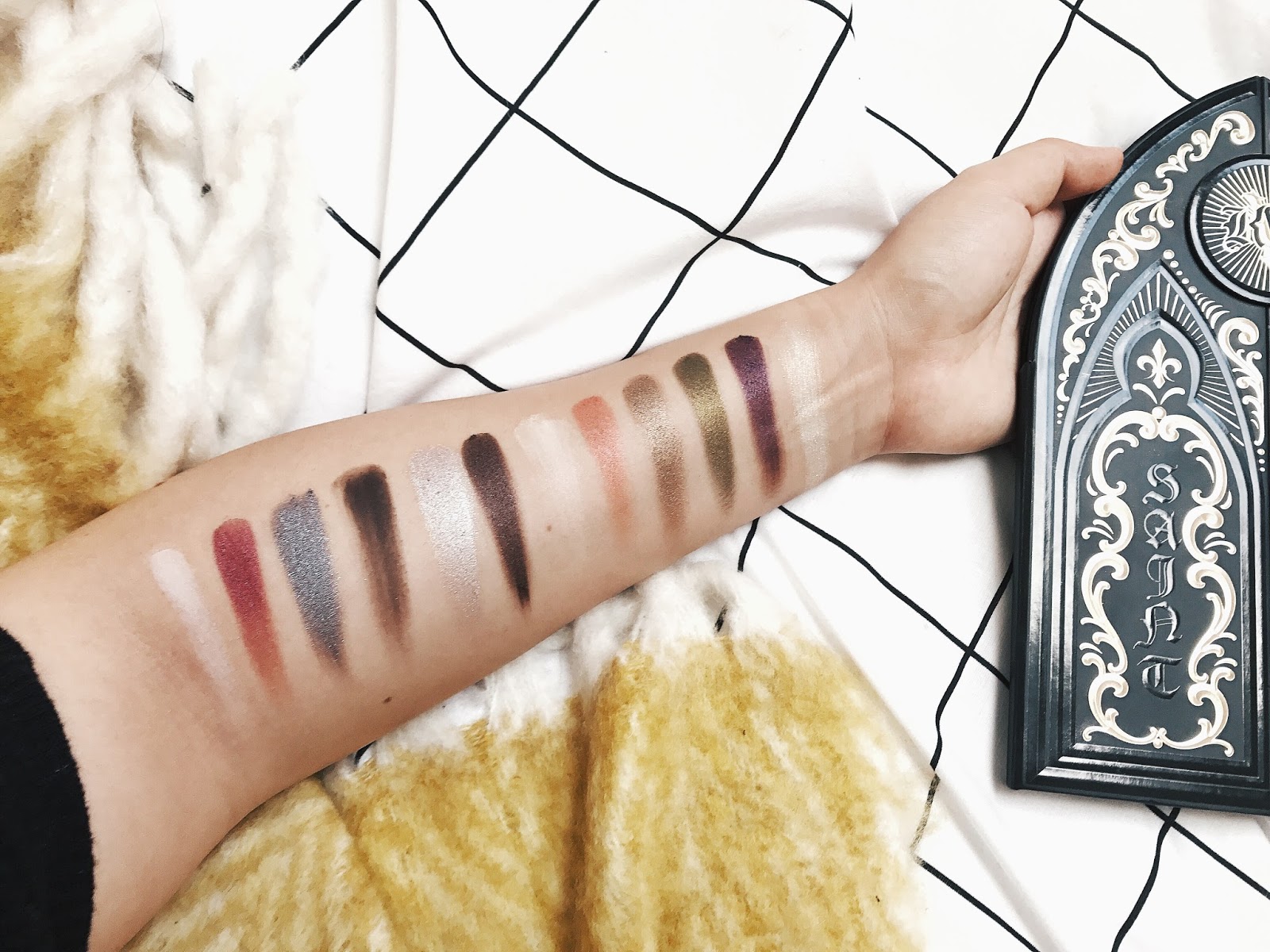 In terms of swatches, these are beaaaautifully buttery and smooth. The straight up shimmer shades feel wonderfully soft, almost cream-like, however they are indeed a powder. It’s almost like a thick shimmer powder that acts like a cream, if that makes sense? You do need to apply a glitter glue and wet (Fix + or whatever your poison is) before applying, but when they do go on foiled you’ll know that it was so worth the time spent getting it on yer lid.

The mattes are also just as pigmented and creamy, and blend like a dream. There seems to be a lack of crease shades in this palette, however, but I’ve just been using my contour/bronzer powders to pop in my crease before grabbing this palette. Crucifix is fab to deepen up those outer V’s and Martyr is a great warm crease choice too. 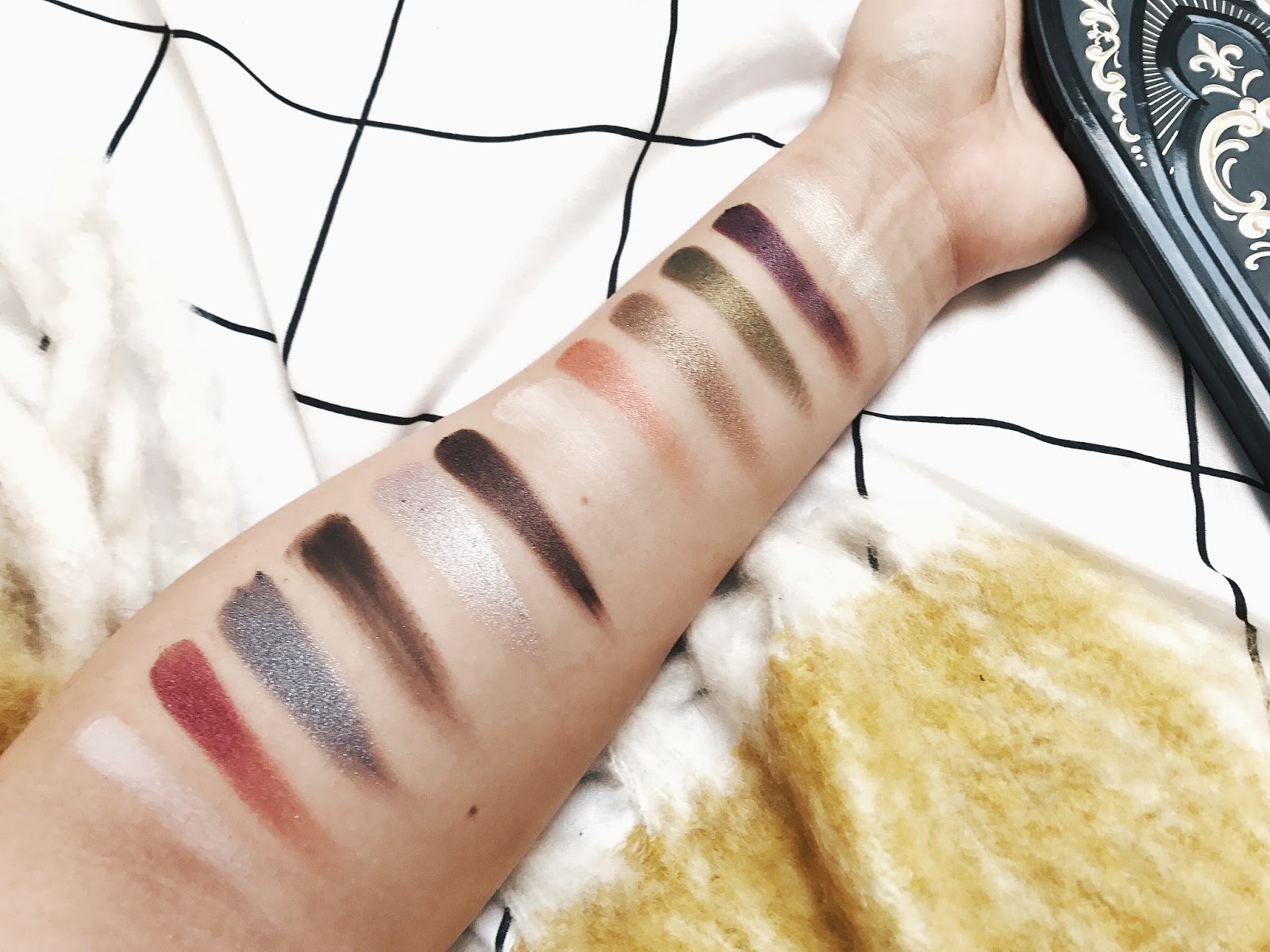 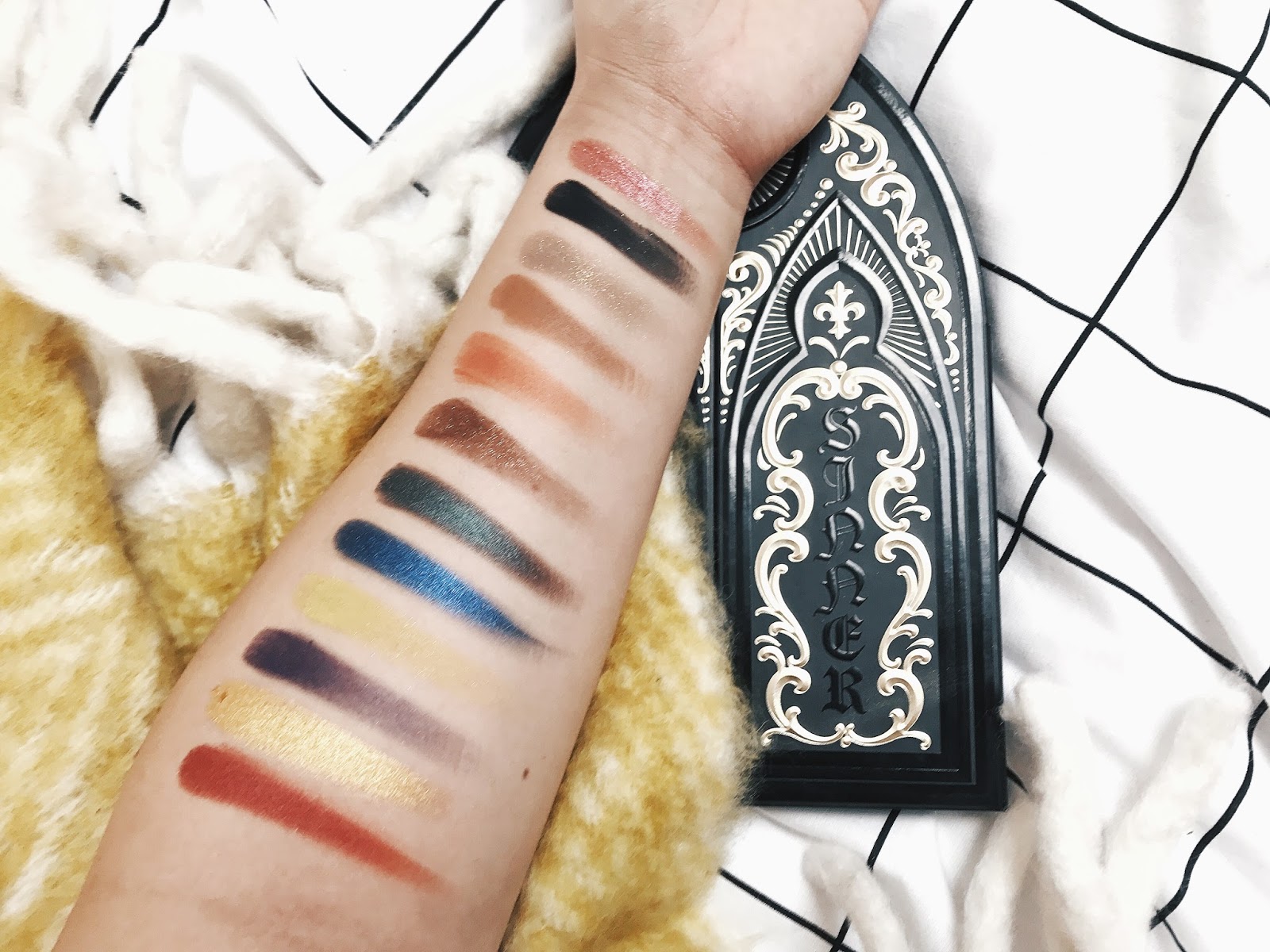 The real *pow in yer face* shades of the palette (in swatches and on the eye) are Cathedral, Heaven, Relic, Vestment, Ministry… all the shimmer basically. But my favourite, faaaaave shade in this whole palette is Ashes. This medium toned taupe-y brown matte shade is infused with glimmering bright green glitters which actually stay on your eye. Yep, better believe it girl, unlike the Too Faced formula (which is god awful) Kat Von D has officially nailed the glitter infused mattes. I’ve popped this on dry in the crease and wet all over the lid and it’s equally as gorgeous both ways.

In terms of fall out, I get none with the mattes but I do get fall out with the shimmers if I use them dry – which I rarely ever do. Honestly, just wet your KVD shimmers and foil them, you’ll thank me for it later!

Other than a little bit of fall out, I am so in love with this palette guyssss! 10/10 Would recommend to anyone who is a fan of a real artistry palette for the eyes, with multiple textures, shades, and countless final looks. This palette is one for the creatives!

Get your Saint + Sinner Palette here!

What do you think of the new Kat Von D palette?