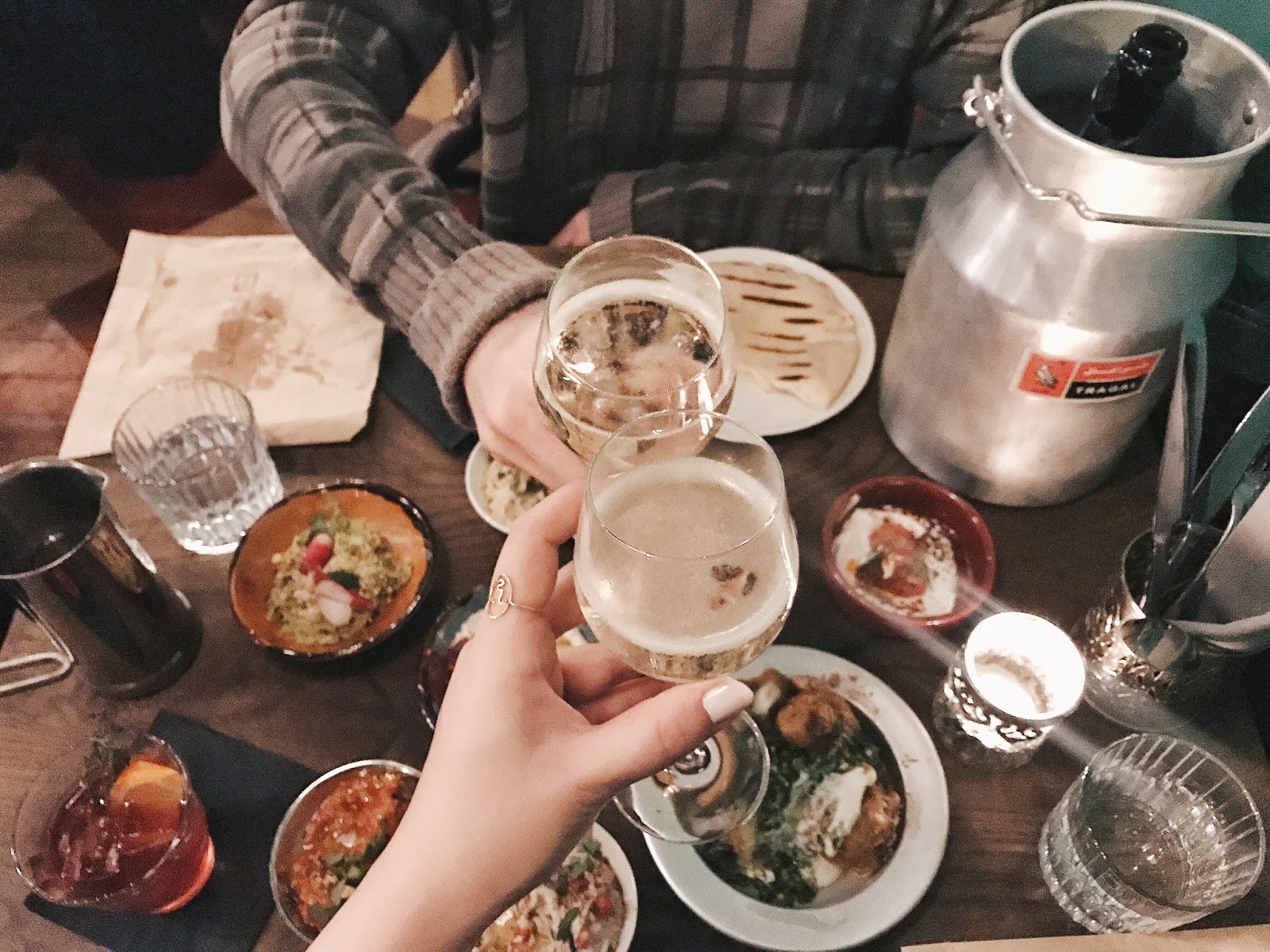 Hey ho, I’m back from Edinburgh with a full heart, and a full stomach. Backstory – It was Alix and I’s first couples trip together and we had such a fab time exploring the city and each other on our little Scottish mini break. We both knew we had to have a culinary adventure too, and when BABA Edinburgh got in contact, we were so ready to sample their mezze menu.

Located at the end of George Street, the restaurant is ideally located in the close vicinity of the main Waverley Station, high street, and plenty of hotels. The eatery itself is located behind a beaaaautiful bar (we’ll definitely be heading here for a tipple when we’re back in Edinburgh), in a really cosy, well used restaurant space, the dark decor had me swooning! 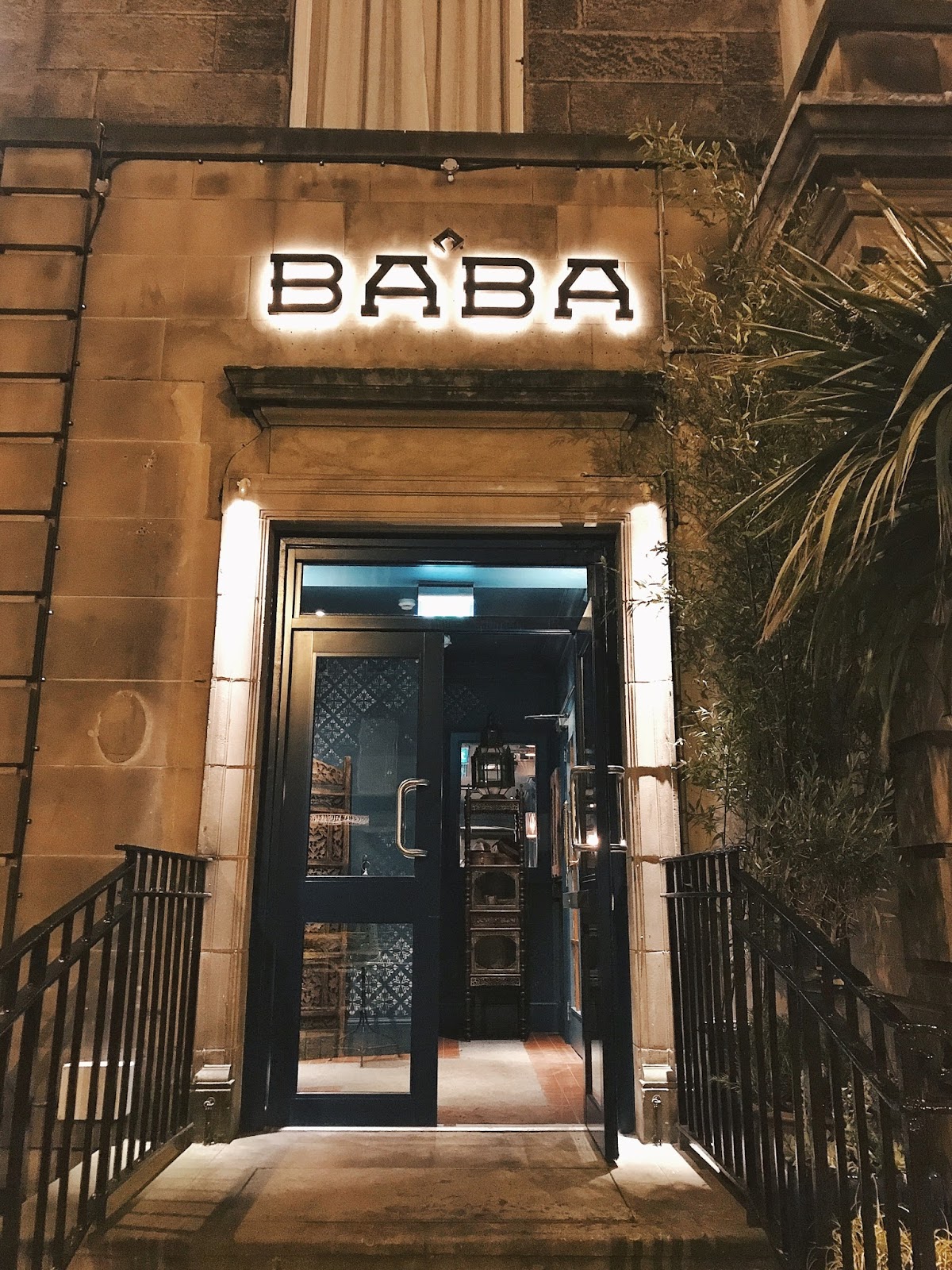 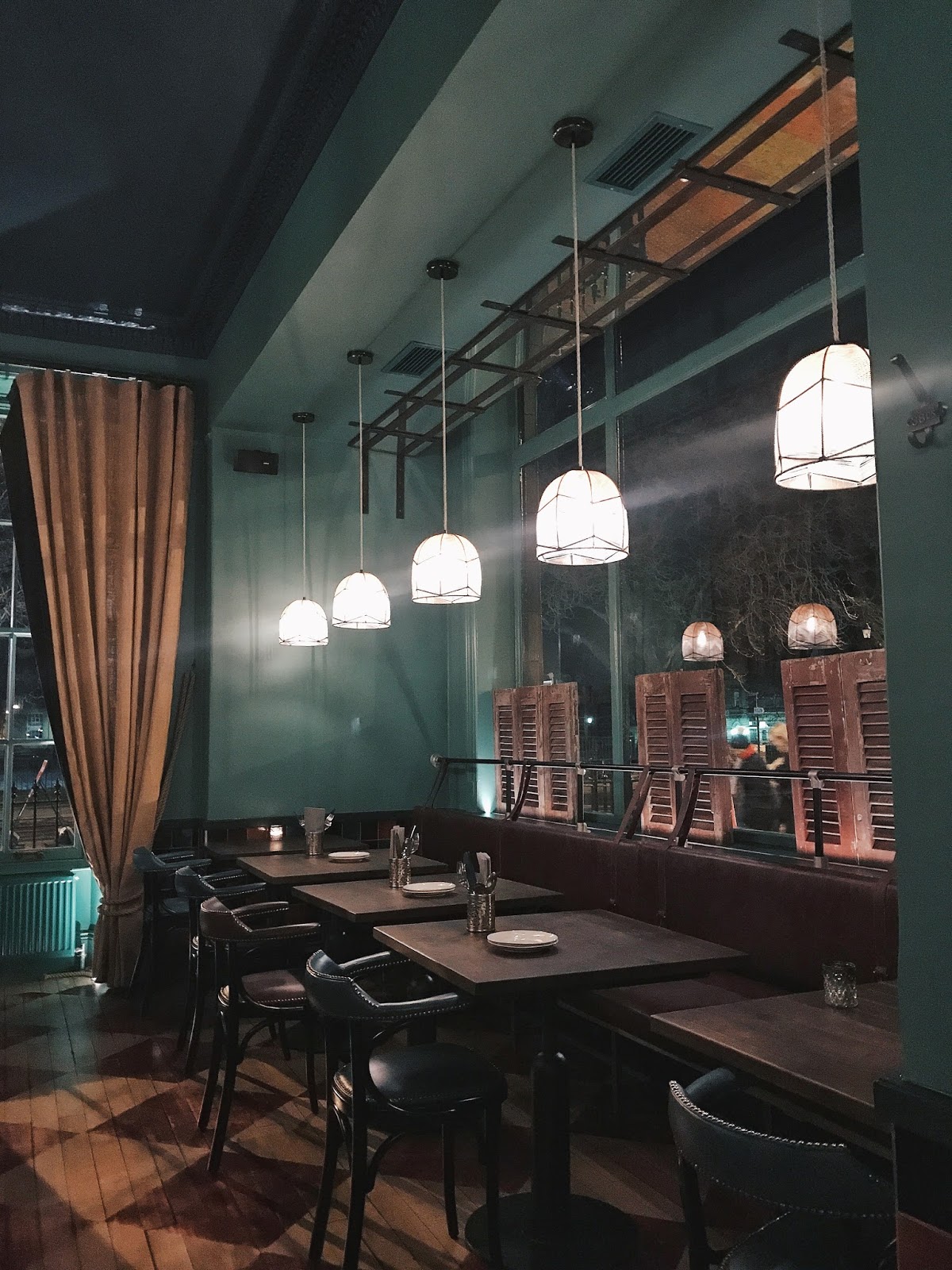 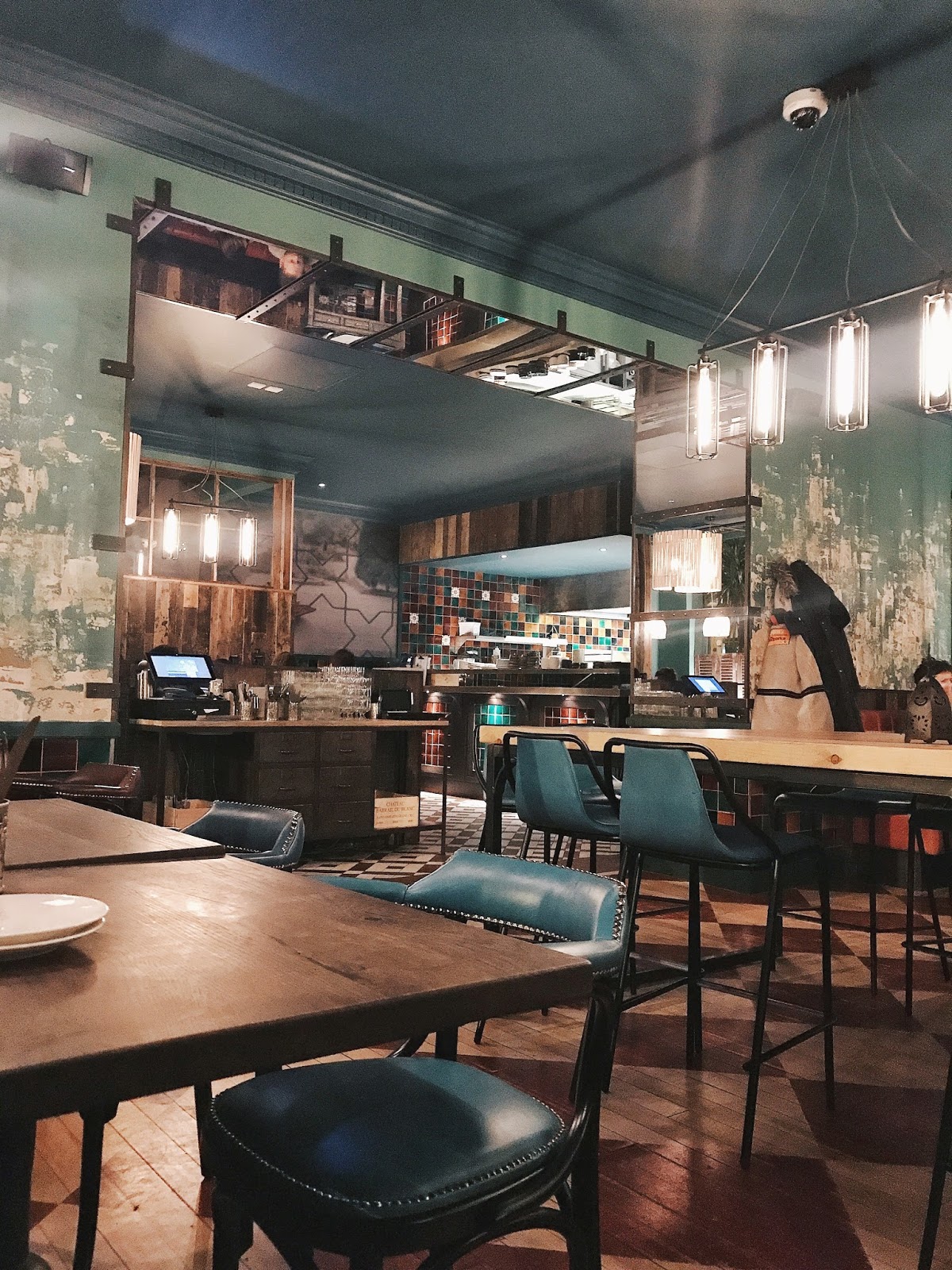 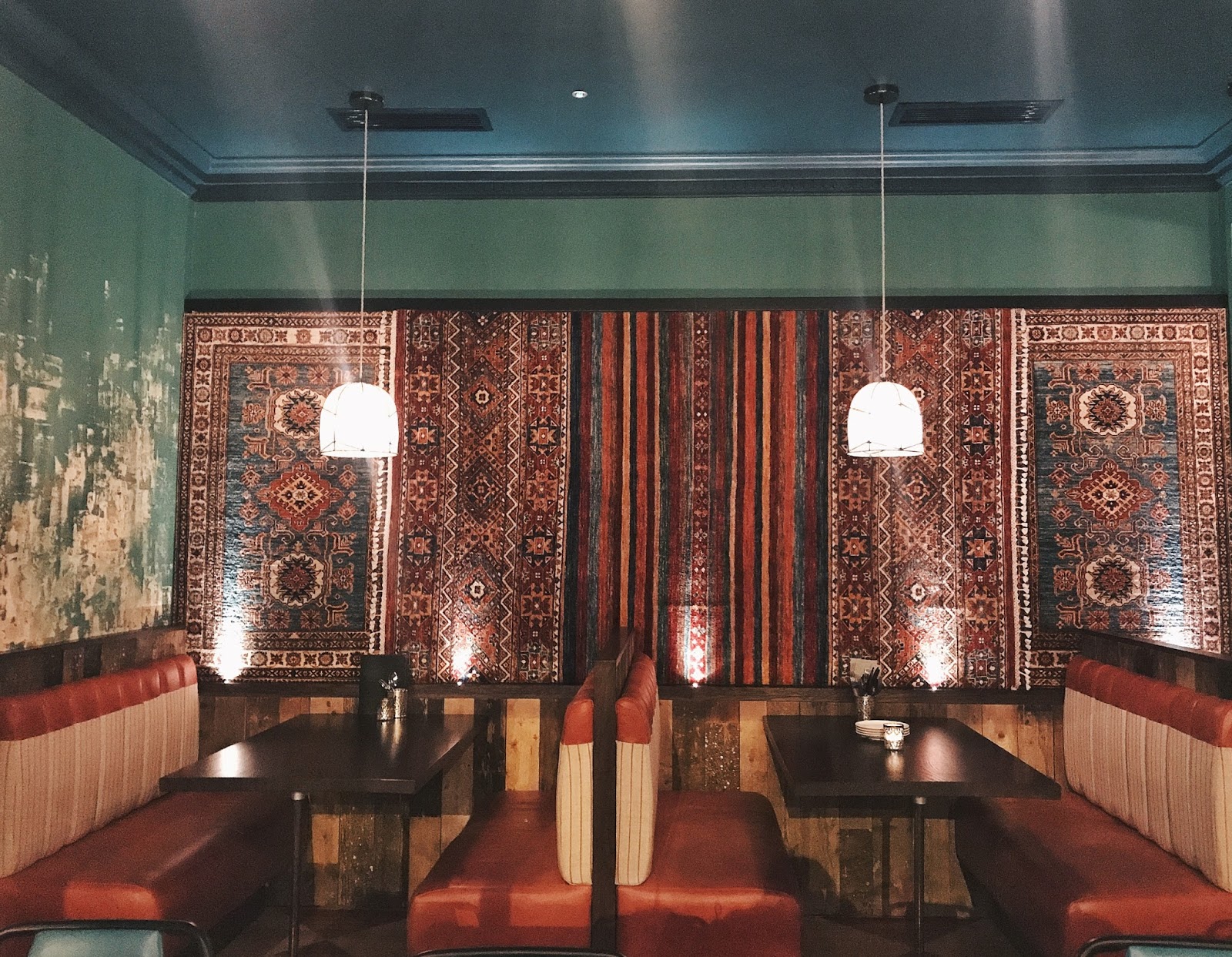 To start we samples a unique cocktail each (we decided to go for two different cocktails to get a better idea of the flavours on offer) and I’ve got to say, Alix definitely ordered better than myself. The Barberry Sour* (£8.50) was beaaautiful, and we both agreed that it was a moreish concoction with dates and lemon flavours for dayzzz.

On the other hand, my Olive Oil Negroli* (£9.00) was an instant regret and even Alix didn’t want to finish it for me, which is a rare occurrence trust me! I’m not really sure what happened here but the flavours didn’t mesh well at all, and it had an almost paint-like aftertaste. Anyway, we got a bottle of the Terredirai Prosecco Milliesmato Extra Dry* (£28.00/bottle) which was delish (!) and certainly kept me happy for the rest of the evening. 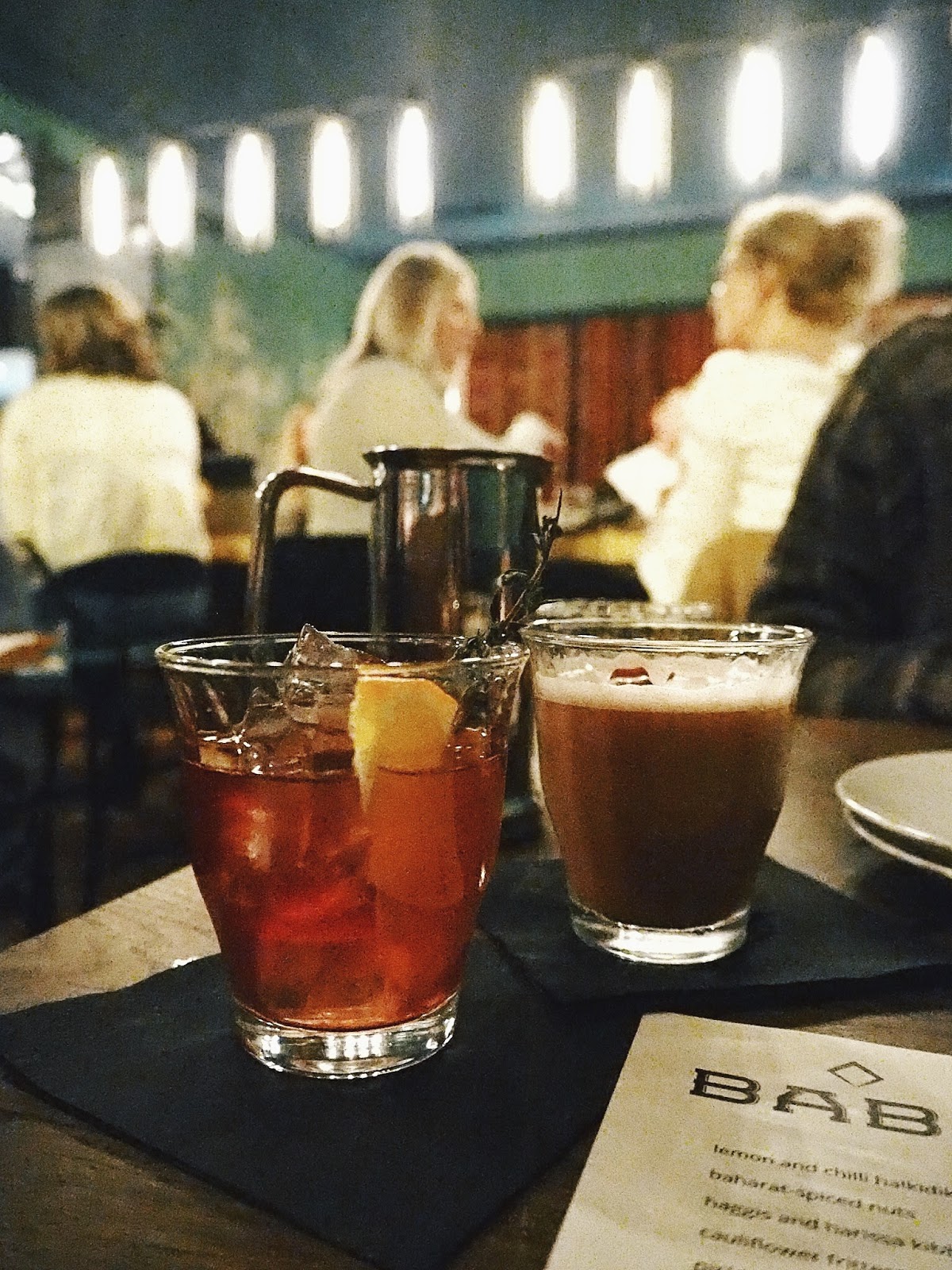 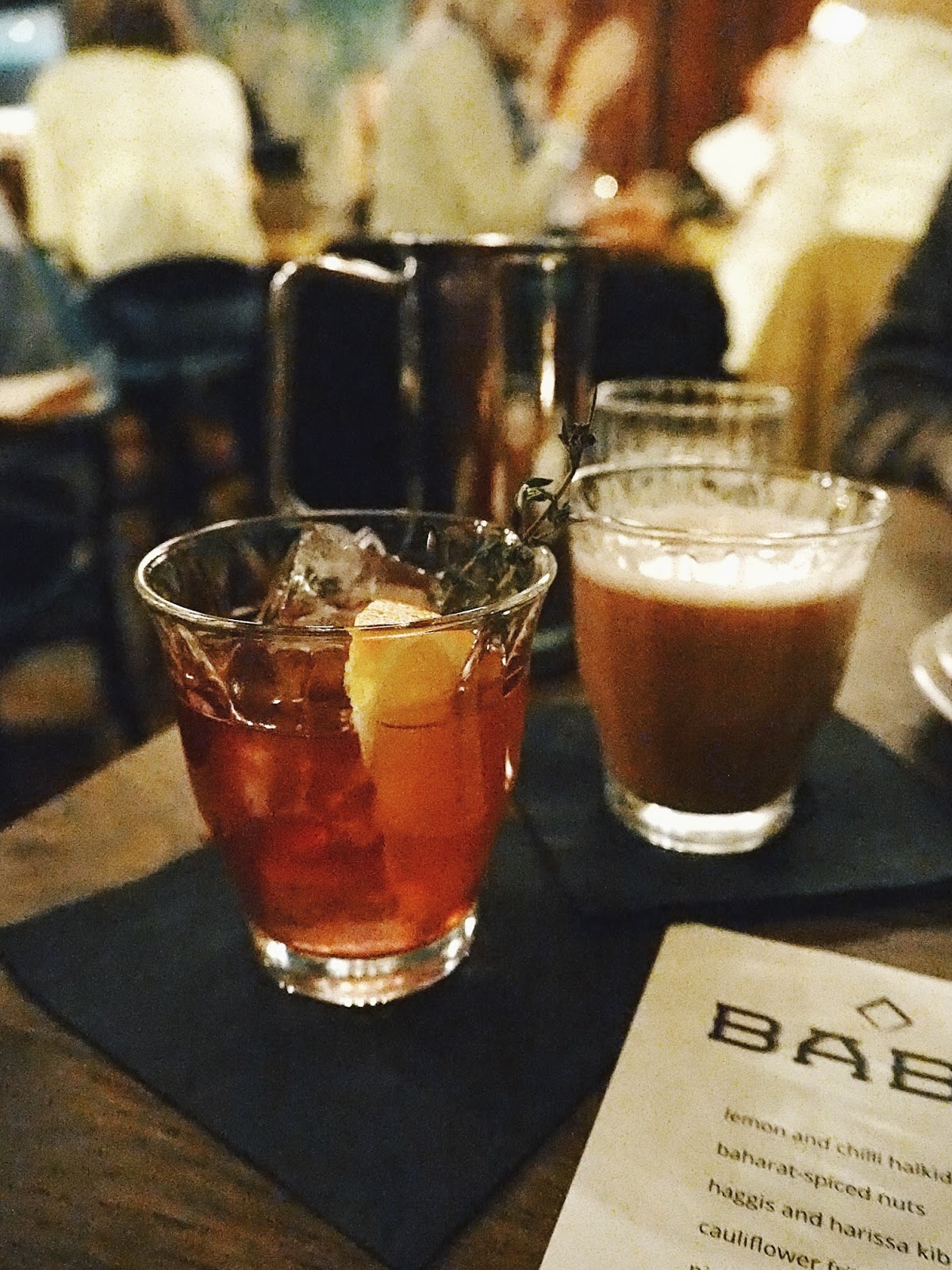 Okay, so at BABA instead of getting traditional starters –> mains –> desserts combo – you order “Dips” which come with grilled pitta, and then the larger “Main” dishes come later on in the meal. We opted for the whole shebang with the ~ Try Them All* ~ option which serves two for £17.00. The Try Them All option features all 8 dips and I personally would 100% recommend getting this if you’re a big fan of greek mezze. 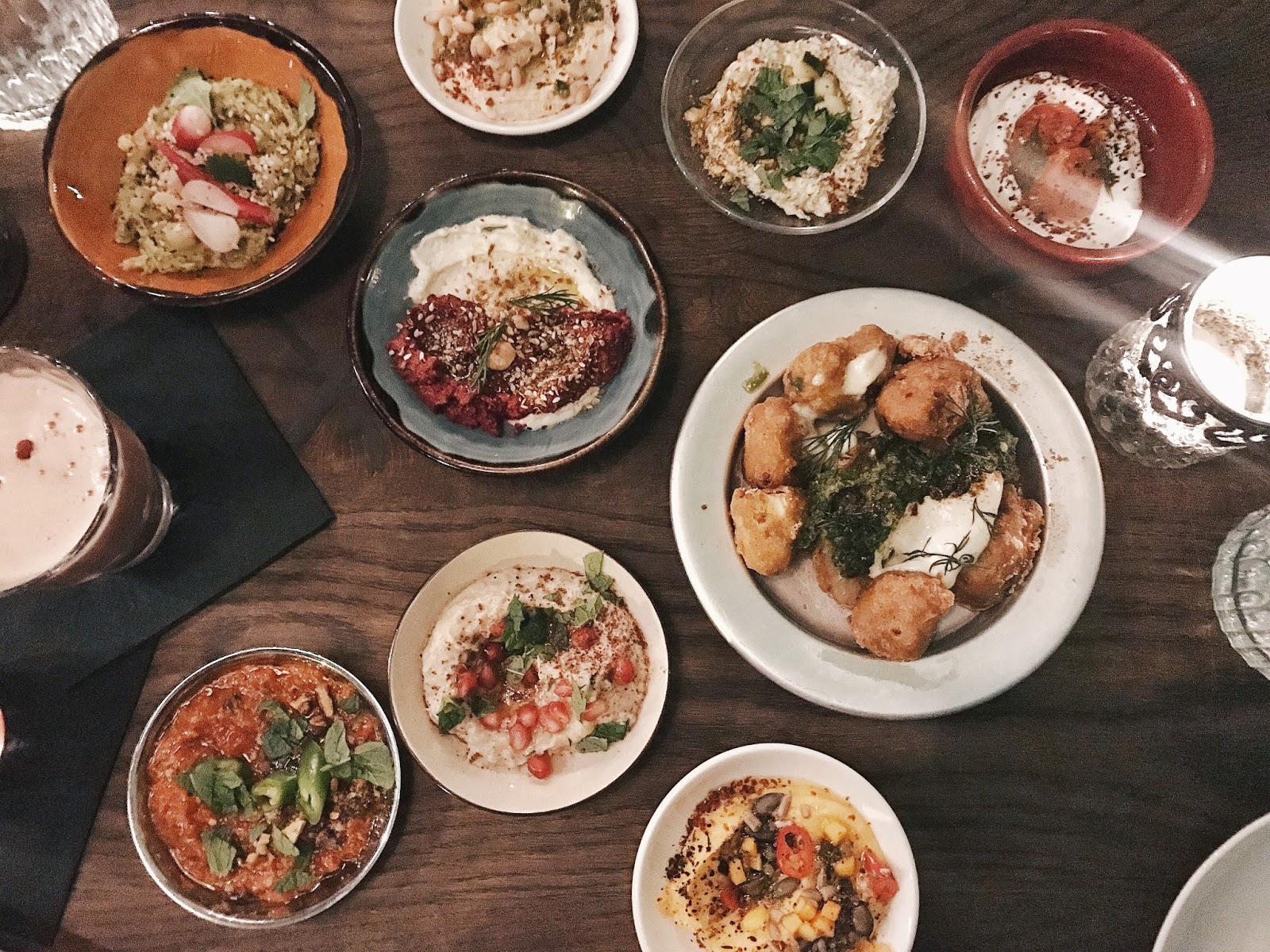 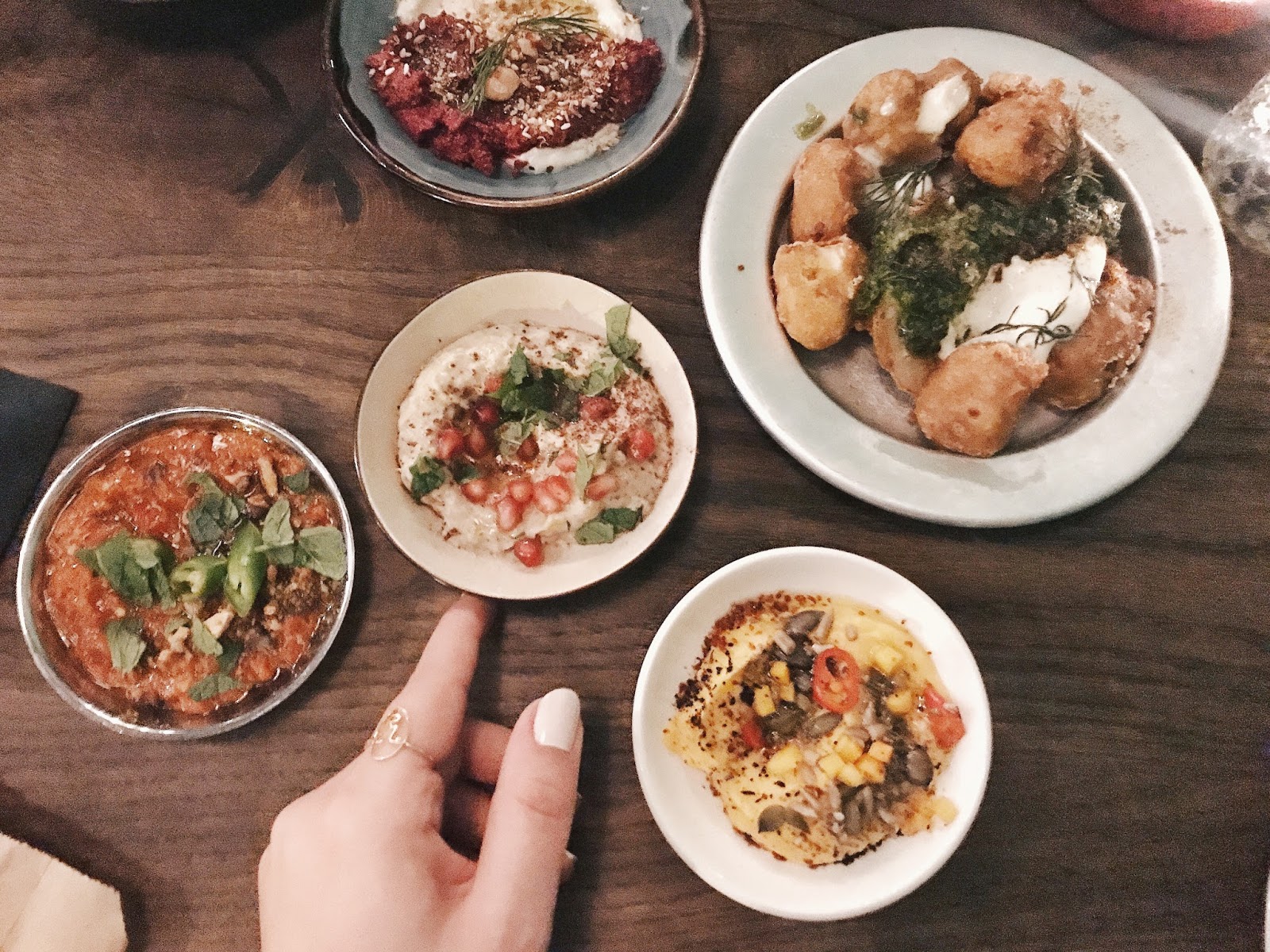 By far, the stand out Dips were:

We finished these ones off completely and if we we’re waiting on the mains we probably would have ordered more. The Baba Ganoush was the most stand out for me, it was absolutely delish with the soft grilled pitta. On the other hand, Alix almost had the whole of the Goat’s Cheese Dip to himself (genuinely had to fight to get some off his side of the table). Just for balance, I wouldn’t go out of my way to order the standard Hummus* (£4.00), or the Labneh* (£4.00) which were still nice, but very basic compared to the complex tastes of the other dips. 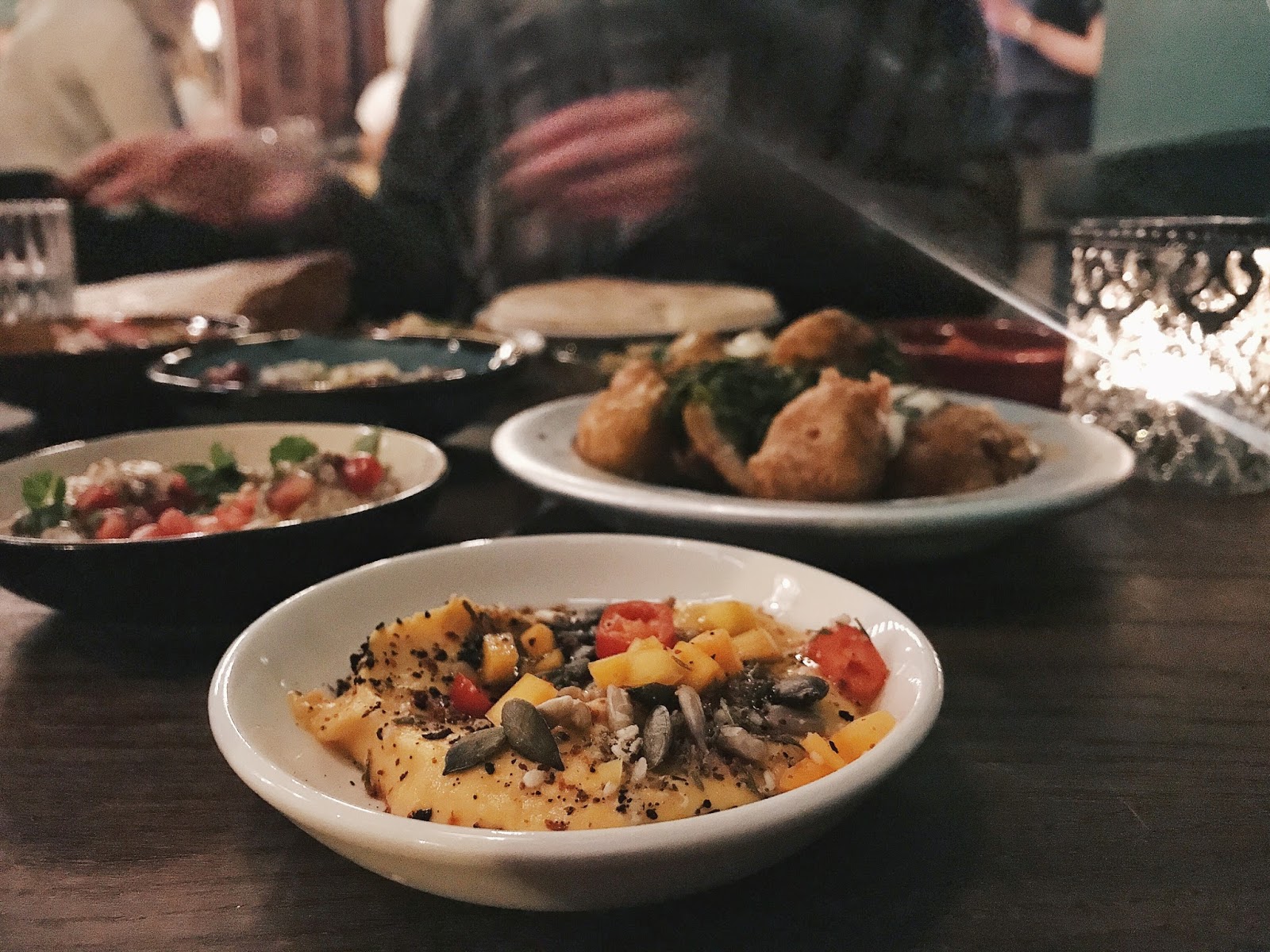 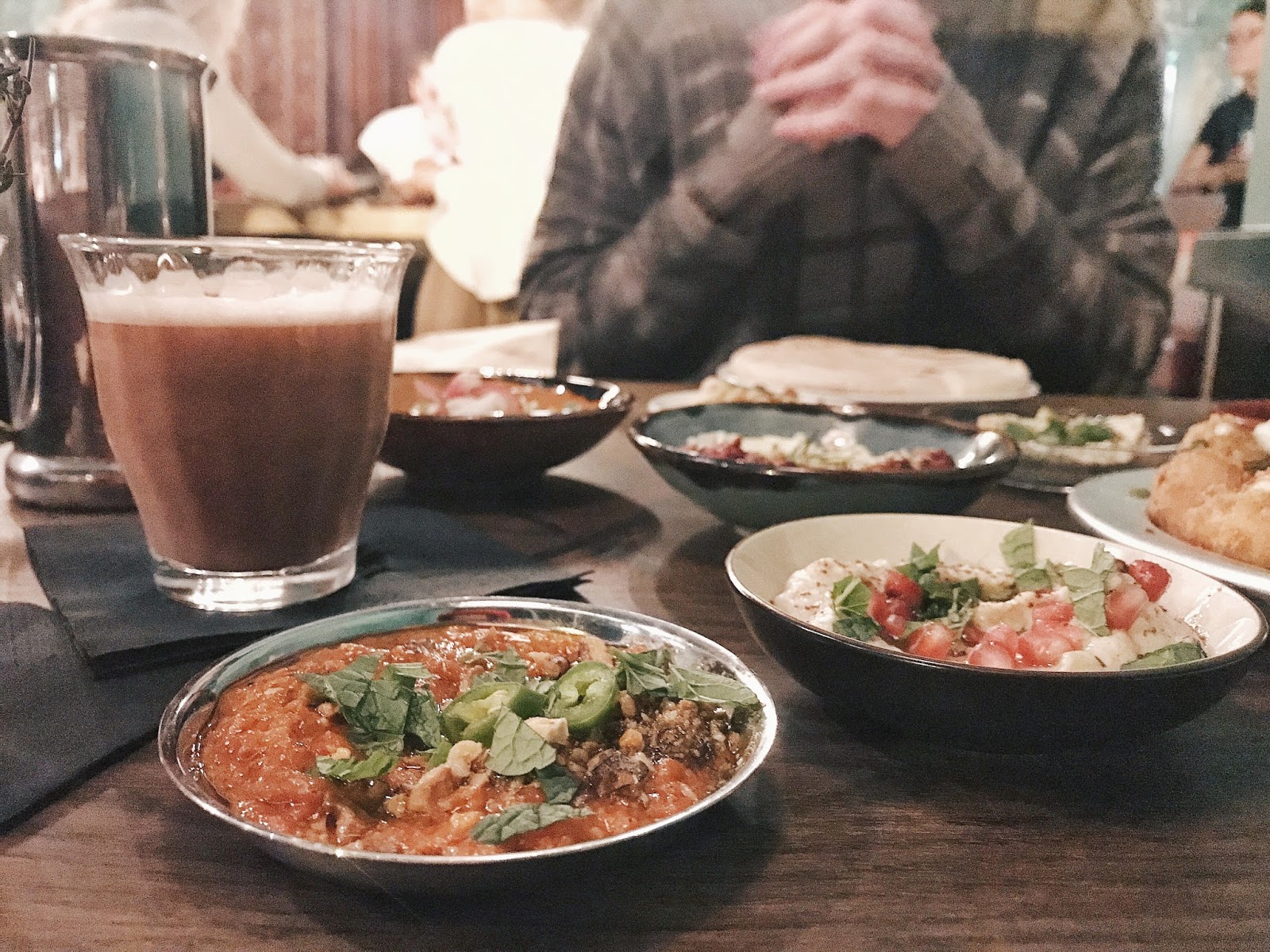 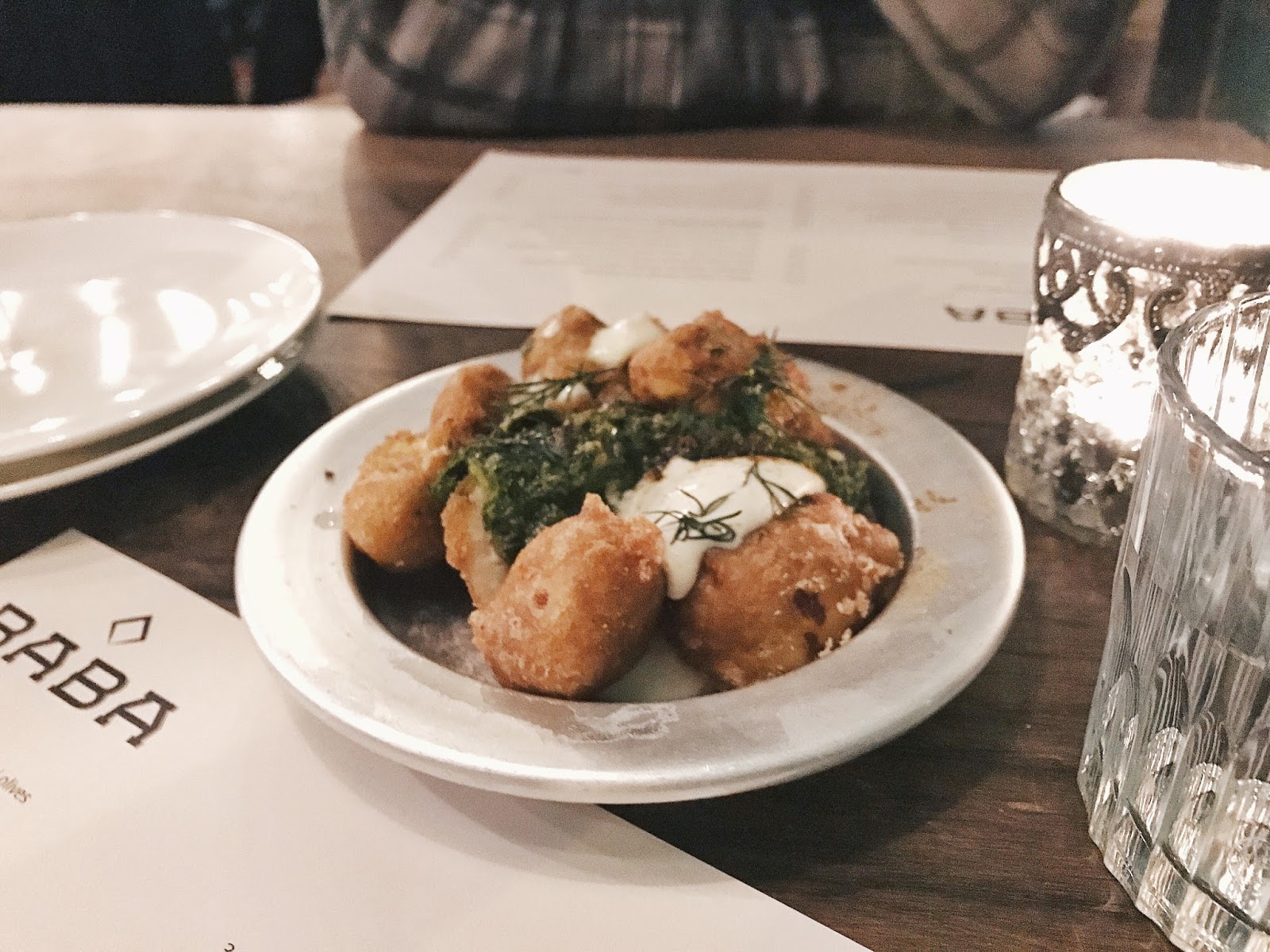 We also were persuaded to try the Cauliflower Fritters* (£3.50) by the lovely server, who informed us that they would blow our minds. Order them. Even if you don’t like cauliflower – ORDER THEM. These little nuggets of deliciousness actually converted me to cauliflower, it’s the first time in my life that I actually enjoyed eating them. 10/10 would recommend to anyone looking for a fab veggie starter!

As we’re big meat eaters (sorry if you aren’t!) we ordered three meat mains and one veggie main – which are all small/medium sized dishes, so it’s advised that you get two each or three/four to share to make up a main meal. The first that arrived was the Slow Roasted Pork Belly* (£8.00) which could possibly be the juiciest, softest slow roast pork that I’ve ever had. The flavours were also really punchy, and the celeriac gave it a sweet kick too. 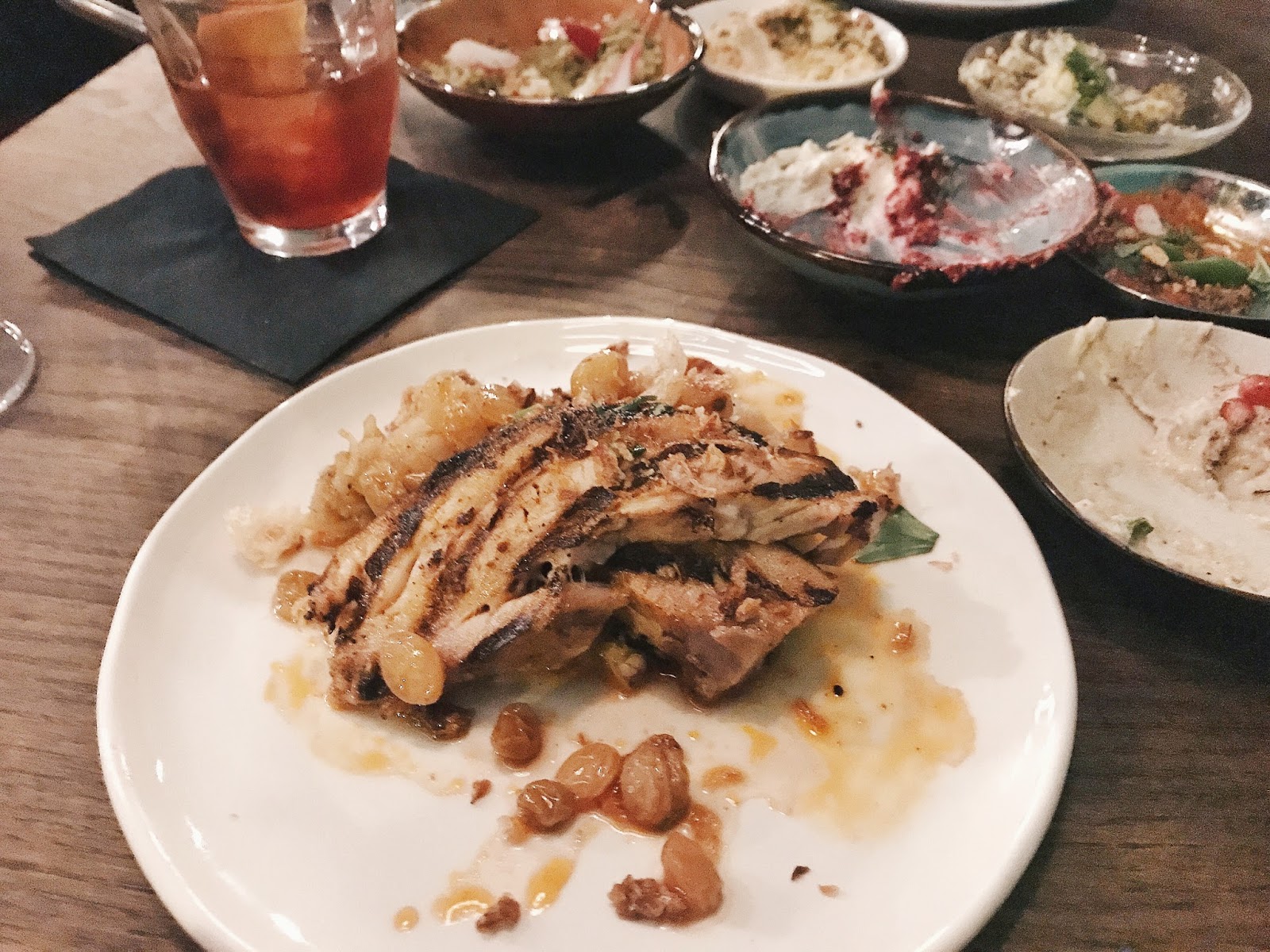 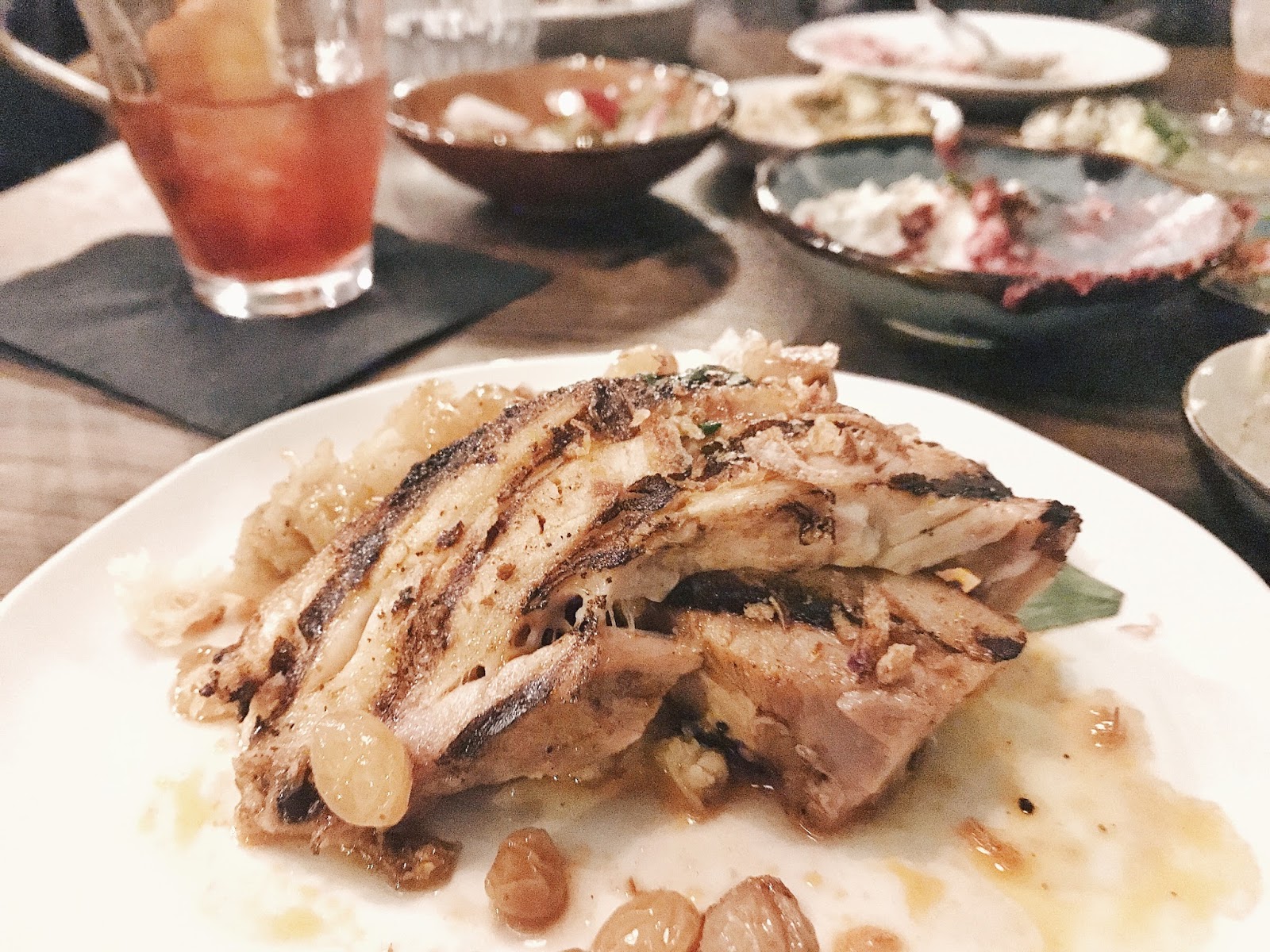 Next up was the Monkfish* (£12.00) ~ which I’ve only had once before ~ was beautifully cooked, with a seriously moreish taste. This was probably Alix’s favourite as he’s big on fish – but if you’ve never had Monkfish before, it’s quite meaty like tuna is. The tomato and saffron sauce was beautiful, and delicately worked with the fish and chickpea combo. 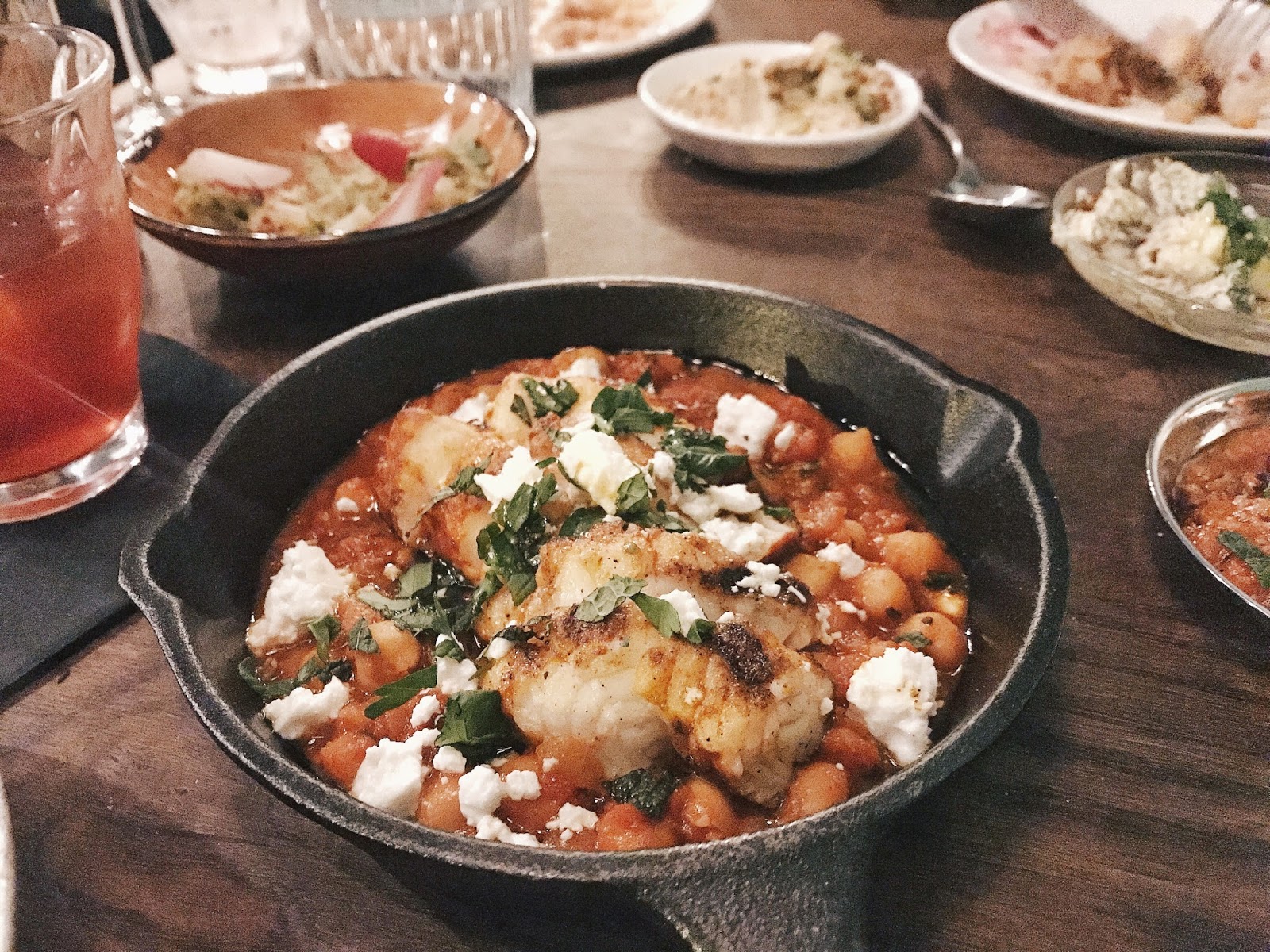 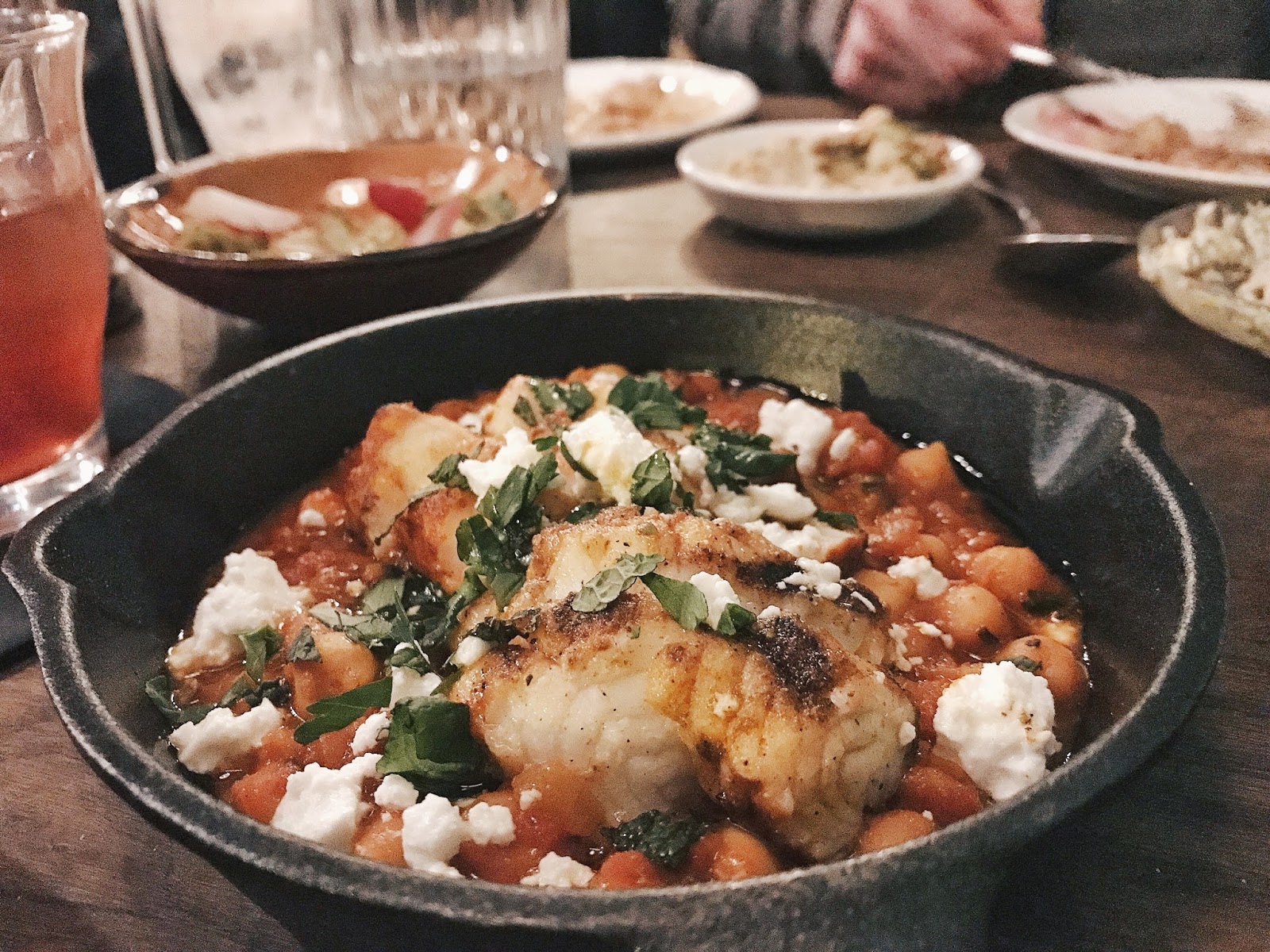 My top pick is the Lamb Shawarma* (£9.50) – Not too intense, or salty, but spiced and purrrrfect to pop in the pita wrap with a bit of salad. This in itself would have been a full main for me, but Alix said that he’d need this and a little something extra on the side to fill him up. This has definitely got a more traditional “kebab” sort of vibe to it (which I love), and the meat was cooked perfectly and then shredded to pop in the wrap. 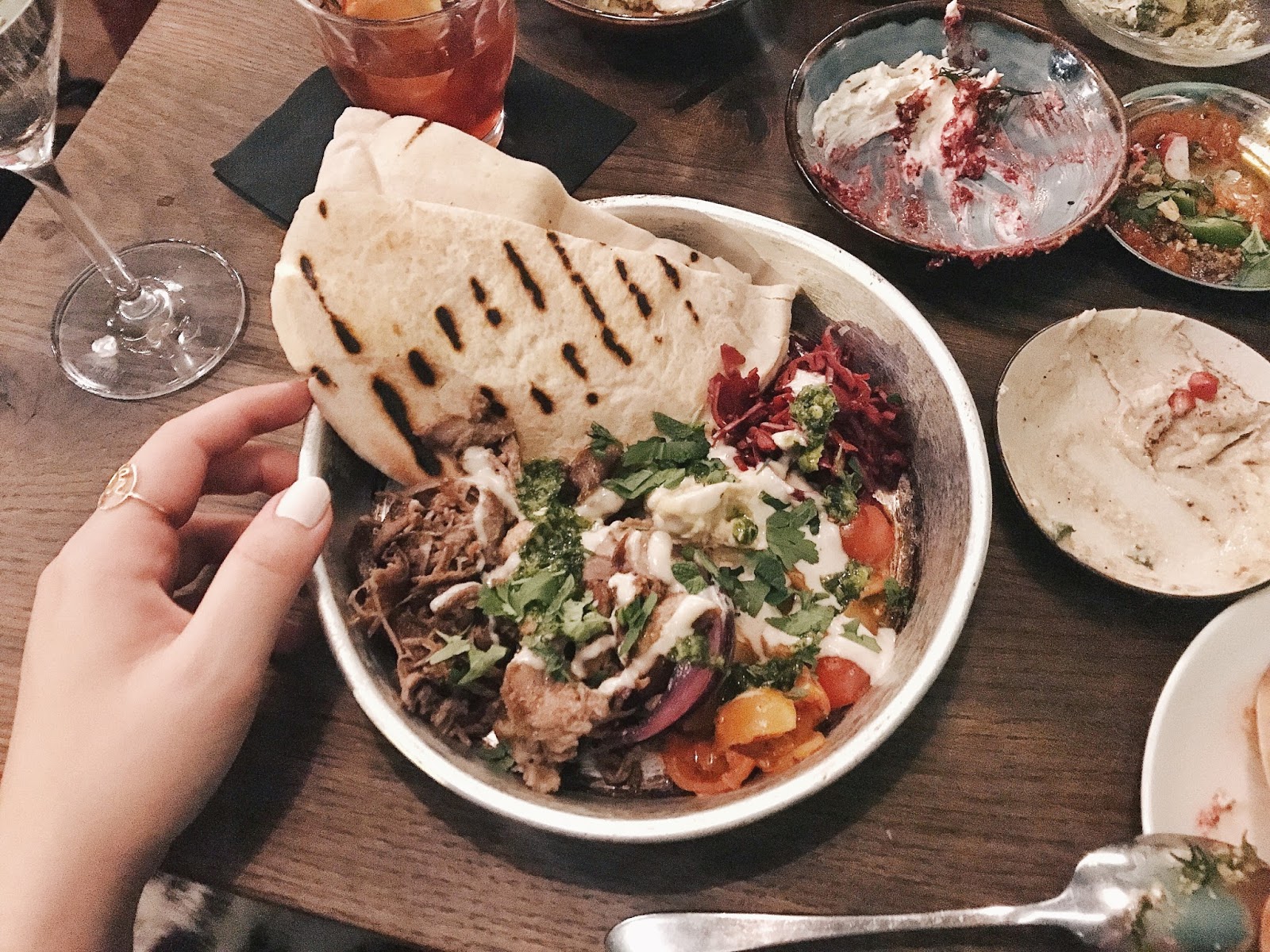 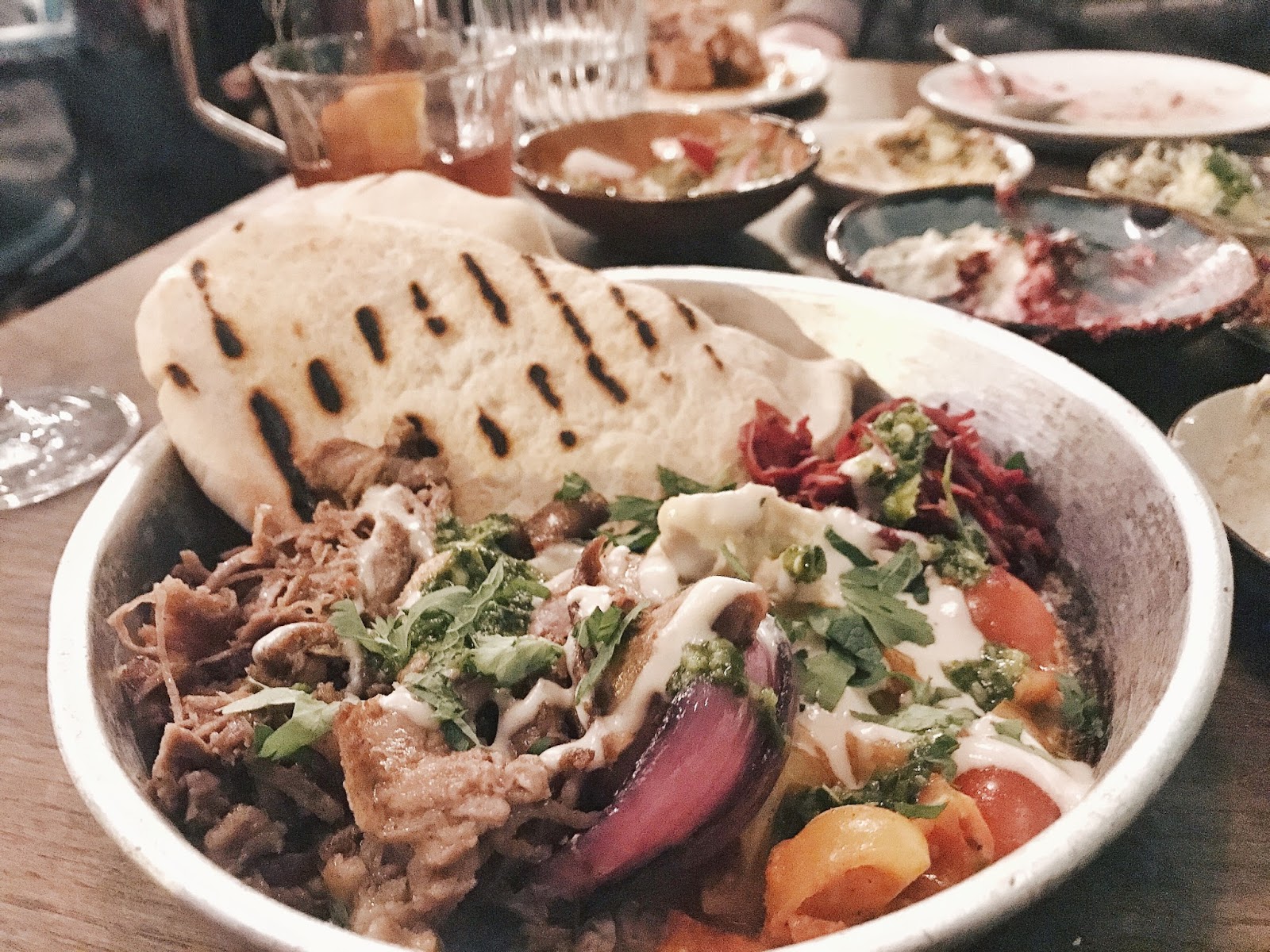 Unfortunately, the Cauliflower* (£4.50) and Charcoal-Grilled Carrot* (£4.50) sides were just not hitting the spot for either of us and came across as quite bland. Seems like BABA knows it’s meat, but perhaps not so much the veg…? I’m not sure, but it didn’t tick any of my boxes. The carrots had a nice taste but were quite hard (???) so evened out on a pretty average score. On the other hand, we barely touched the Cauliflower after a few bites as it was just okay and a little tasteless. If you fancy cauliflower at BABA’s, 100% go for the fritters! 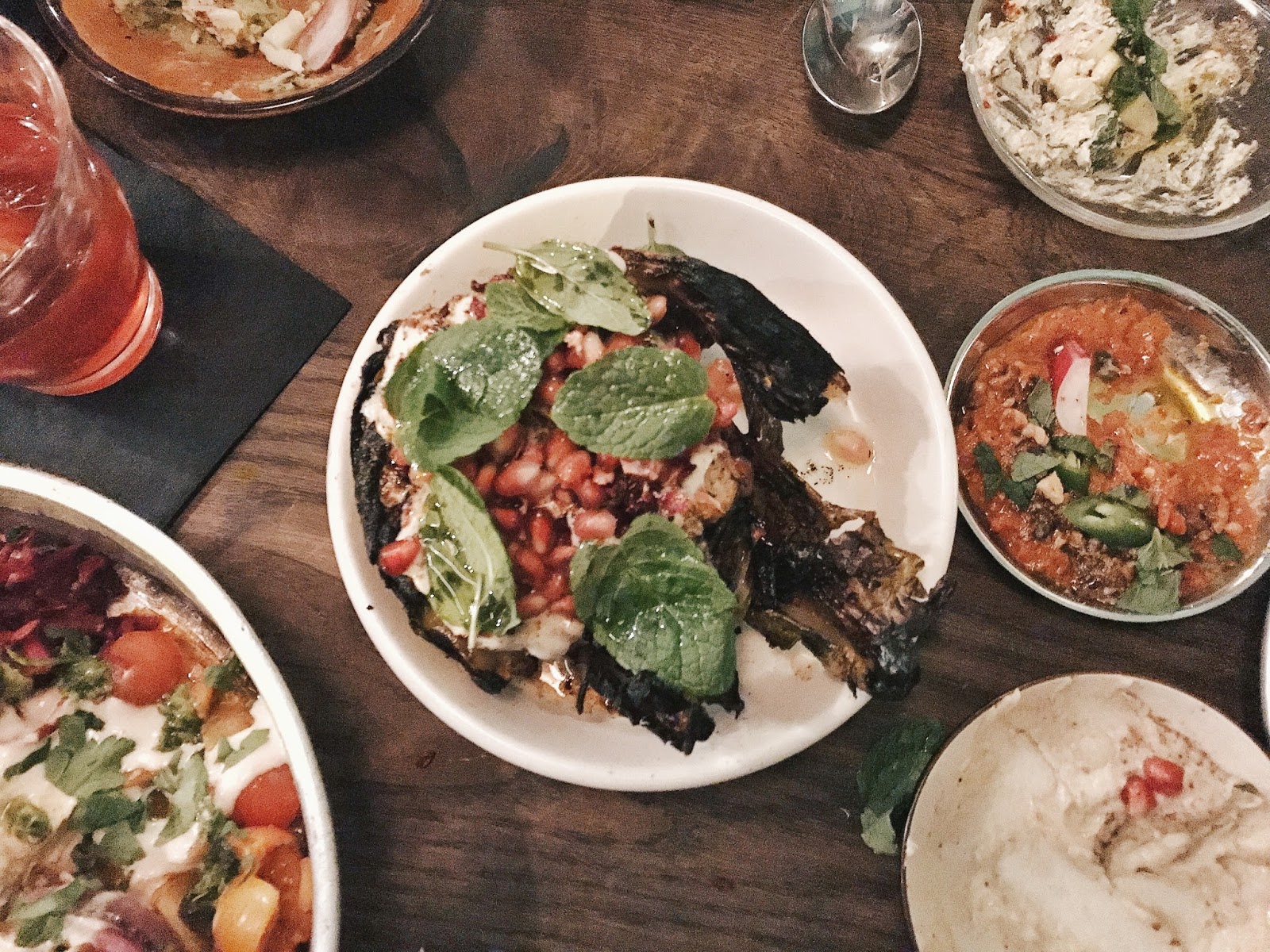 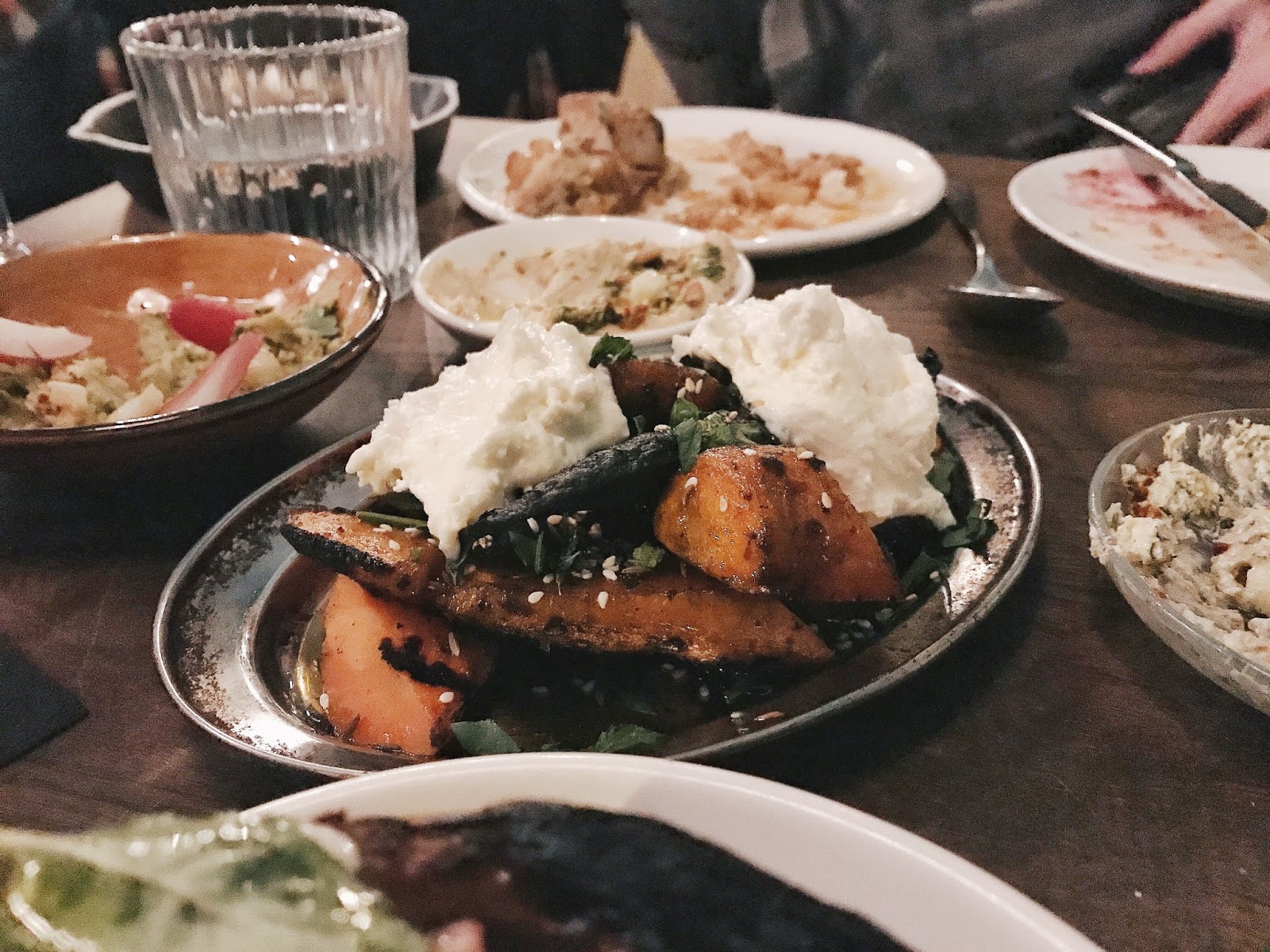 To finish, we ordered the BABA Sundae* with two spoons! The sundae consists of three different ice creams (dependant on what’s available) but we had pistachio, hazelnut, and coffee – Yum! Topped with pomegranate seeds, pomegranate molasses, sesame seed biscuits, and meringue pieces. We were both taken aback at how well the molasses worked as a sweetener, and yes, we fought for the last spoonful. I won because… girlfriend perks! 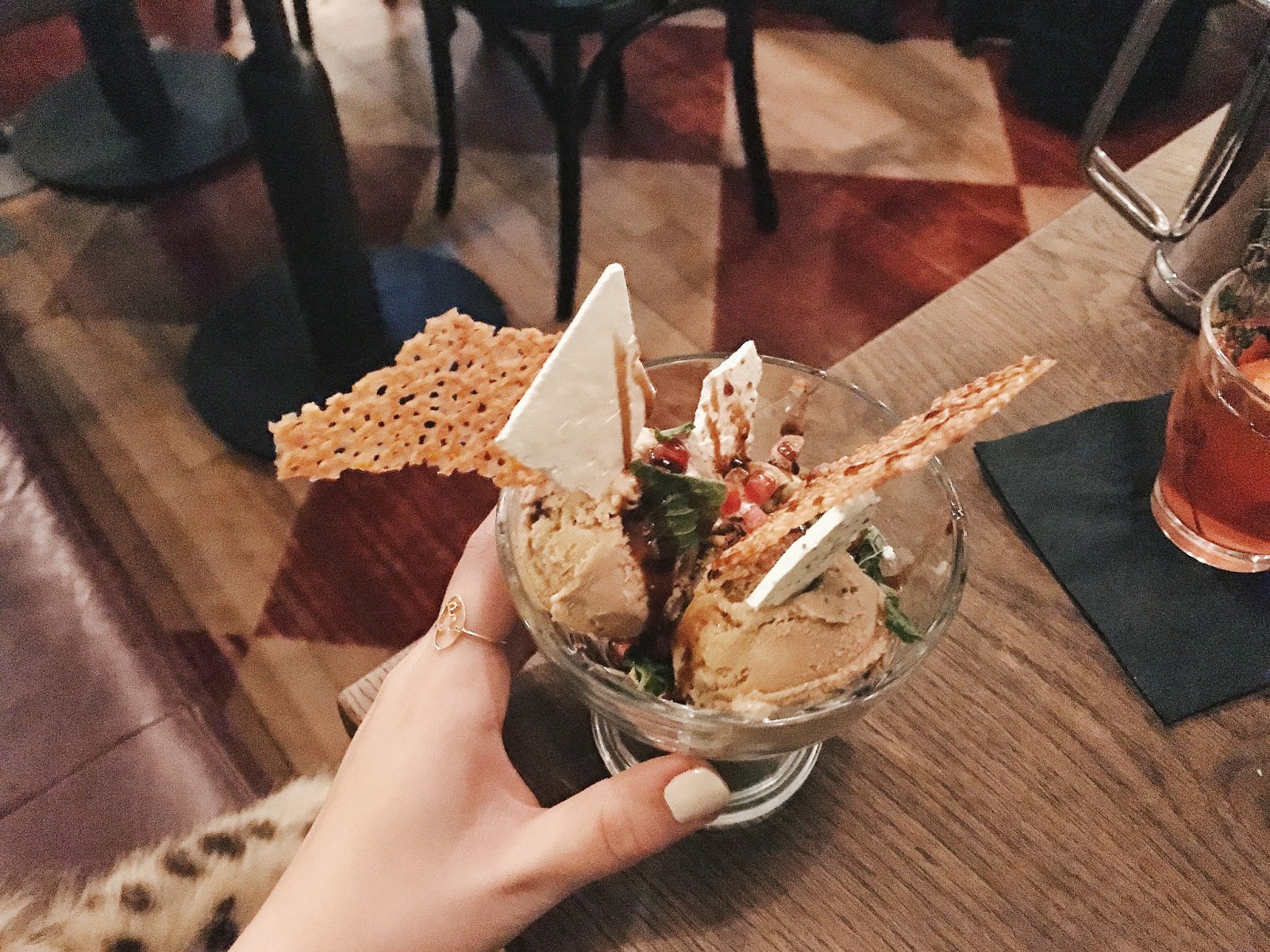 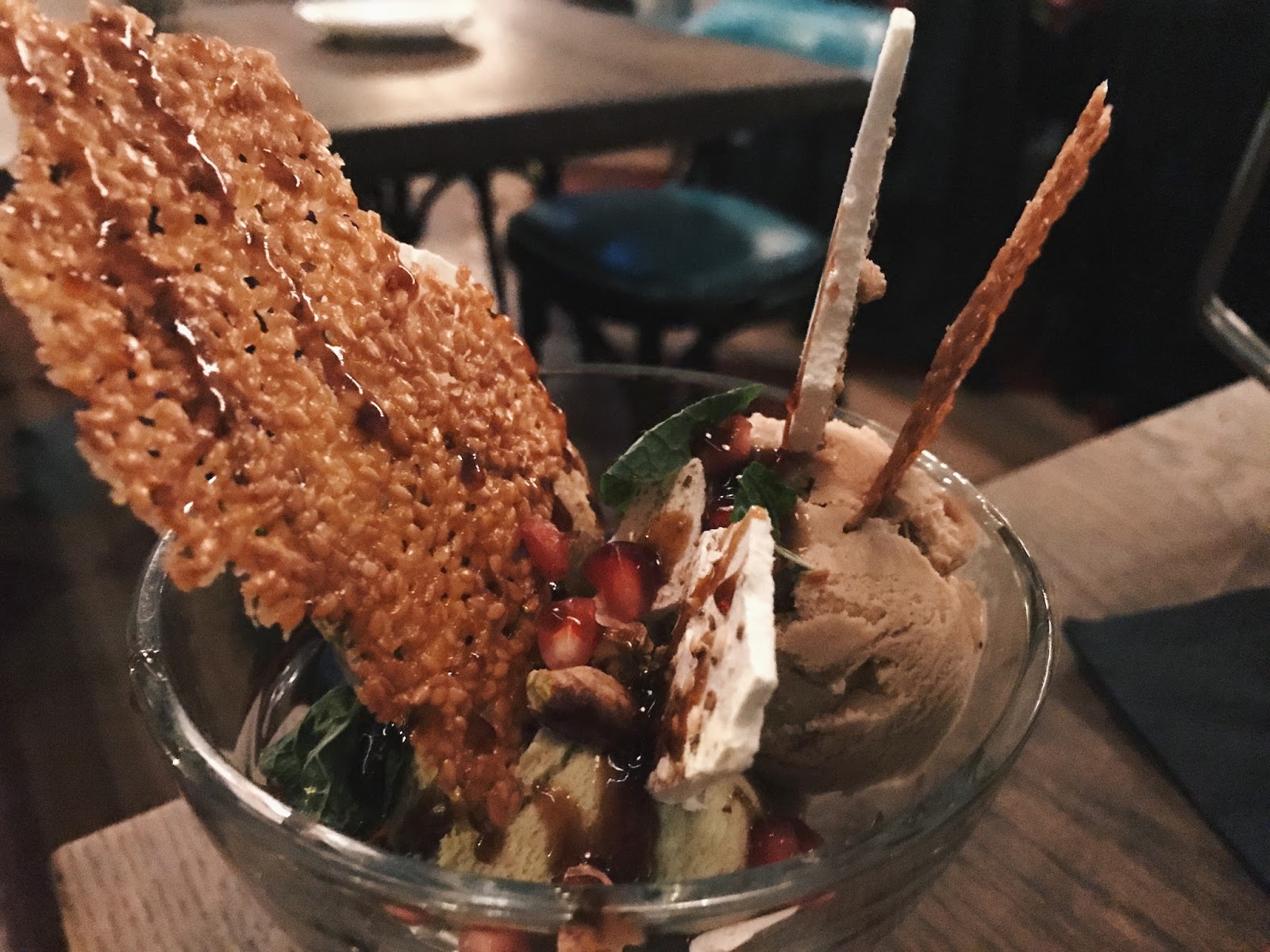 All in all, BABA Edinburgh are slaying the game in terms of their dip selections and their meaty mains however I would suggest skipping the cocktails (unless you really do like something v. different) and opt for a bottle o’ bubbly or beer to accompany your mezze instead. Also, order the Cauliflower Fritters, you wont be disappointed! Thank you for a wonderful evening, with top notch service and delicious mezze, BABA!

*I was gifted this experience with BABA Edinburgh, but my thoughts and opinions are my own*